Judy recently needed a general anaesthetic for some day surgery, which meant fasting from midnight.

Fasting before surgery is crap.

Well, it's not crap from the point of view that it reduces the risk of drowning in your own sick while under a general anaesthetic, which is really good to avoid, but fasting is not something that we humans do well.

Nearly all of us who live in our First World part of the world Down Under[1] would have absolutely no fucking clue what it means to actually be starving, but still we complain when fasting. Heck, many of us usually skip breakfast altogether anyway, making it irrational too.

Most day surgery is done earlier in the day, so it shouldn't be that big a deal.

"I need coffee. Neeeed..." is probably heard in greater measure, as fasting pre-general anaesthetic involves sipping just a few sips of water at most if you're really thirsty, or need to take a pill. Even the declaration of a need for coffee, versus a "want" is a vast over dramatisation. Personally, I express this over dramatisation every morning, every day, being hooked on the stuff, so I get where folks are coming from.

Judy follows all the fasting rules to the letter, and in a lot of ways goes further, like avoiding even tiny things like small mints, which dissolve to sugary or artificial sugarish nothing.

The day surgery today proceeded without hitch or hiccup, and was done before lunch time. Dr/Mr Ross needed to replace a gunked-up stent in a ureter (Judy's third of these now, so they do gunk up quite quickly).

Her anaesthetist was a bloody legend. He introduced himself. He read her file instead of asking her all of it again. He declared: "Oh! We're on volume 3 of these records. That tells me a lot already." Then further declared: "It went smoothly before, so let's do that again, eh?"

To insert a cannula so he could administer drugs and fluids, he started at the tips of her fingers, worked a short way up and found a vein straight away in her hand, sized it up, then slipped that needle in first go with no repeat stabbing.

She's not had a good run with anaesthetists lately, so it was a welcome change. The bloke Judy had last time this procedure was done she declared a butcher. He stabbed several times at one arm in several places, and not admitting defeat, had a few more stabs at it. Later that arm would turn black and blue in places. Eventually he succeeded by moving on to Judy's non-preferred arm, which because of past armpit lymph node surgery should be avoided. Everyone else avoids it. In Judy's words, "He would have made a brilliant assistant to Josef Mengele [of Nazi German experimentation infamy]".

Her new, and brilliant guy also ordered up a "bear hugger" to keep her snuggly warm, God bless him. The best way to describe this brilliant tool is it's a kind of flow-through inflatable air blanket, hooked up to a box by a tube, which pumps warm air into it. Delicious. Because anaesthetised, annoyingly on this occasion Judy couldn't remember much of the super snuggly feeling of being warmly embraced by it. Hospitals are not the warmest of places, so she really appreciated it, even if she didn't remember much of it.

First up, the new guy put an anti-nausea drug in, and that's all she can now recall. She didn't even recollect being told to count down from ten, which surely would have happened to check the anaesthetic was taking hold.

What a stark contrast to the previous guy.

After being woken in recovery (what? huh? go 'way, sleeping), Mr Ross came to see her. He was his usual detached self. He's not a warm chap, but updating her that everything went very well today, he gave her shoulder a clinical and firm pat, pat, pat. That's a first. Every time Judy sees Mr Ross he warms up a smidge more.

On this day, the fasting, time for admission, time for pre-surgery prep, time just waiting around, then finally surgery and recovery was quite smooth. All done and dusted by lunch.

Oftentimes things don't go this smoothly and quickly, so the whole fasting thing begins to suck a whole load more.

On these less than smooth occasions, which seem more rule than exception, by the time you can eat something you're on the ragged edge. Maniacal. That first pack of hospital sandwiches is eaten like a deranged wild animal that hasn't seen food for days, and doesn't touch the sides of your hunger.

The second pack is eaten at a more leisurely pace, with each bite and chew savouring the simple glory of the humble hospital sandwich, soothing the hangry beast.

Today Judy was given just the one pack containing two sandwich corners. While not at deranged wild animal stage on this day, that was still a problem. After all, there's a first/second pack process, don't they know? Two packs equals one whole sandwich, don't they know? Having one pack is like only putting on one sock.

"Hrmph. Two bloody corners. They must be economising."

On the hunt, sneakily and cheekily, we slowly walked the thirty feet next door into the care of the Day Oncology angels, without appointment. Beautiful Bridget (Florence Nightingale) met us, and upon hearing Judy's need, dragged us to the fridge to appropriate the rest of that egg and lettuce sandwich goodness. A quick chat with some of the oncology angels, and chat with an acquainted fellow patient, and we were finally truly ready to be on our way.

It was good, even if Judy never did get that party pie she so craved. 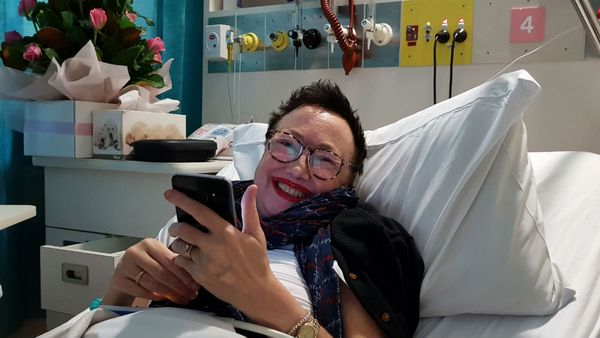 Brains are complex, super necessary things, and are appropriately well protected by our body's design. Right now, Judy has a critical problem with her brain protection system.