Had a resurgence of cancer never invaded Judy then in all likelihood we would never have met the Day Oncology angels.

"I'd never have experienced such human kindness."

From such cancerous shit comes a glimpse into the best and most resilient that humans can be.

These people are expert with a cannula, and also expert with kindness. Their job would be a hard one, knowing that so many that they treat are faced with incurability, but it seems that each and every one of them is adept at not letting that show. Their focus is on treatment, getting it done and dusted, plus the adjunctive chatty excitement of here and now, or recent past, or excitement about things just around the corner.

Treatment for them seems just a hurdle that will be overcome. Will become a thing in future of the distant and hopefully forgotten past. It will be successful.

I bloody love the optimism they exude.

Fay is an old Ansett Airlines buddy of Jude's. She has found a new niche in the world that is customer service, brilliantly working the welcoming reception in Day Oncology.

Dr Rob associated early the Ansett history shared by Judy and Fay, and asked Judy whether it was alright to tell Fayzie that his patient and her friend had stage four breast cancer. He wanted Fay to hear it from him, and not risk the shock of bumping into Judy one day in Day Oncology. What a wonderful man.

Judy knew she was working there, having been kept up to date through social media networking and also the process of flight attendant re-acquainting, but hadn't made contact in a little while.

Flight attendant re-acquainting is a wondrous thing. It predates Zuckerberg's Facebook by many decades, but is basically equivalent. So many friendships, the occasional, professional and the super close ones are formed over many years working together in usually short encounters, and fleshed out in full on overnight stays. Being a flight attendant in a large airline means that it is infrequent to fly with the same people, so when it does happen with someone you know there is a period of re-acquainting, often fast and shrill, full of questions about each other and other buddies and where they are and what they're doing and who they're seeing or who they're doing and how their babies are and where they're living and how they're coping and what's happening in life and what will be happening soon. It is breathtaking to behold.

"Dr Rob's a beautiful man. He will never, ever give up on you".

Nothing fazes Fayzie. We've seen her revert instantly to flight attendant mode, grabbing soda water to dab, dab, dab at spilled blood smears sprayed all over and around a silly old bugger who had pulled out his cannulation needle. All with a smile.

Whether spilled coffee or blood, Fayzie jumps right in.

Her big smile lights up often, greeting folks warmly into the care of the oncology angels.

Julie is an impossible to find vein finding cannulation Ninja. You want it done first time? Julie can whisper those veins up.

From afar it would appear that at times it is hard to draw a smile out of Julie. She is a soulful sort, and very focused on doing what she does extraordinarily well, and in a professional manner. Despite this, Judy seems to be able to coax a smile often times, as can many of the angels around her.

When Judy was admitted to hospital on one occasion, and nowhere near Day Oncology, I found Julie standing outside her room on the ward as I left it after visiting. What was she doing there? No idea. But I said hello, and that Judy would be so pleased if she could pop her head in. She eagerly did so.

I didn't witness it, but I am sure there was concern and smiles aplenty.

We have found common ground with Georgie being parents of older children. Ours are a little older, though.

Sometimes she dreads parenting events, like an impending party, but you get a sense that she's absolutely loving the experience that parenting brings, and doing a bloody good job of it. Sometimes walking on egg shells, sometimes drawing a heavy and stern line in the sand, sometimes mentally whole body hugging the wonderful times.

Florence Nightingale and the MET-call girl.

On one visit to Day Oncology, Judy had very low blood pressure, and this was combined with repeated, unsuccessful and painful attempts at sticking a thick cannulation needle into a vein to get the oncology job done.

Our Judy is a fainter at times, so what would you think would be the net result of low blood pressure, a predisposition for fainting and painful stabbing with a needle?

You guessed it in one. Judy passed out.

Sam gets a MET call going, which is the hospital shout out for a medical emergency, resulting in what appeared to me at the time as the hospital equivalent of the U.S. Navy SEAL team six descending. It was a cart of stuff and two blokes, really, but they did swoop impressively.

Familiar with Judy fainting, I'm doing the count, and worriedly but calmly tell them how long she's been out for. Poor Sam and Bridget were so rattled by it all, and had no idea how long. Time stretches at times like that.

In spite of that shared experience, Bridget and Sam are beautiful smiling faces that manage to turn to light any dark event.

We were sitting on easy chairs just inside the threshold of Day Oncology, stalking Dr Rob because Judy had blown up like a balloon with fluid after being in hospital in the days before.

We didn't call him, or schedule an appointment, so we thought we were being rather naughty in just lobbing up precisely where we knew he would be.

Lovely Scottish Andy found us first, and he let Dr Rob know we were there.

Later, Candy found us lurking in the hall and wanted to do anything to help us, with a look of sincerity, and genuine care, and happiness.

After feeling so naughty, Dr Rob thanked us so for coming in, and apologised for keeping us waiting. We had a genuine need, and he was genuinely pleased that we did come in, and that he could help.

Had we been there hours longer we wouldn't have cared, but Candy would have been there caring for us.

I recall Danni for her plaited hair, beautiful rich umber complexion, and even more beautiful smile. She loves my stories, and is probably smiling broad, as only she can at this one right now.

Danni, I write to educate, I write to record little moments in history, and I write because it is good for my head. But I love it when all of that touches someone that I know.

So thank you, Danni. Your care means so much.

I bumped into her in a hallway of the hospital at the end of the day, as she was bustling home after that long day.

Rita took the time to pop head up, say a Scottish "hellooo", analyse the weather, talk the small talk, and then importantly to earnestly ask how Judy and I were going.

There is Dianna with the pretty Swarovski earrings, Violet with the Bobbi Brown burnt red lipstick, Vanessa with a flower in her hair, and Mel, and Candice, and Shelly, and Nadia, and Amelia, and Carly, and Anne, and Jackie and Sanam smiling at the front reception, Scottish Andy, and bubbly Toni with the "I love nursing" badge.

"I've seen Dr Rob in the office in Day Oncology out of the corner of my eye, just smiling as nurses give me a hug when they see me. He's a really busy man, but I love it that he stops and smiles."
- Judy

I like to think that Dr Rob is smiling at the here and now, and of the wonderfulness of it all. I think he smiles because a patient of his is well and truly alive, and full of that life in spite of circumstance, interacting so well with people he so admires.

Knowing what he knows, and the gory and finite, though hopeful medical details of it all, his job to us would seem nigh on impossible.

But he knows better. Sometimes sad, but mostly joyous and filled with angels, that's life.

The Day Oncology nurses truly are angels to us. And our Dr Rob is a cherub glowing bright among them[1].

A heartfelt thank you to you all.

And big loves from Judy and I. 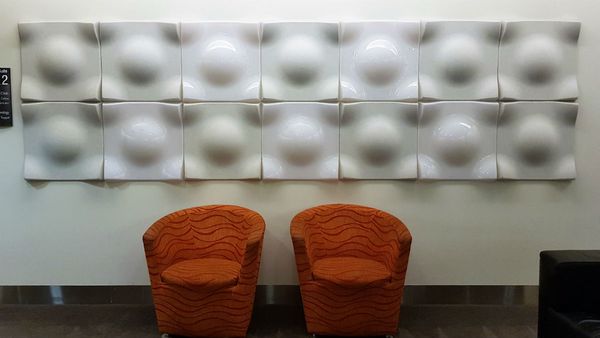 There is no denying that the symbolism of a simple pink ribbon has done an incredible amount in raising awareness and focus on breast cancer. But it's not done much to actually fix it.