They are the central orchestrator of our everything.

They are beautiful, and supremely architected by evolution. They are complex and powerful, able to process millions of things in a flash. They are precious, as our consciousness lives within. They are well protected by our bodies, as they are the vessel of our very selves.

Right now, Judy's having a problem with her supremely architected, complex, powerful, precious and protected brain: There's a big problem with the "protection" system.

So she's back in hospital.

In all of us, there is this fluid called CSF. That's short for cerebrospinal fluid. This fluid, which is produced in the brain and held in a pair of main ventricles, flows around our brain, then flows down and around our spinal cord. Eventually it mostly drains into our blood system down in our lower back, but along the way also drains into other bits and pieces.

CSF is continually produced (about half a litre a day), and acts as a nourishment and shock absorption layer for our critical neurological bits, which are our brain and spinal cord. The buoyancy this stuff creates means our brains and near-brain bits effectively float, and are protected from impact with a liquid shock absorber. Brilliant design.

The unwelcome development for Judy is that cancer cells have been found in her CSF. And that most certainly, most definitely and unequivocally is not good, as that CSF shit protects some critical shit.

This problem is not your typical I've-got-a-brain-tumour problem. If you've got a lesion in the brain then you've got something to shoot at. Doctors can use highly targeted radiation therapy to fire invisible x-ray sniper bullets at it and effectively kill it. Or to use a different kind of analogy, play whack-a-mole: they pop up, you whack them.

So while viewed by most folks as the last thing you'd want, a brain tumour, by comparison, would appear to me a far simpler problem to deal with.

What we've found in Judy's case is what I'm going to call tiny-tumors (it might be a thing, but I've likely made it up). Being small, these haven't been found on scans, yet are large enough, and interfering enough to mess things up with the tiny pipe work that carries CSF from ventricles to spine and elsewhere.

A lumbar puncture (the spinal tap of old) was used to find these cancerous cells by sticking a needle in her lower spine, draining out some of her CSF and testing it. Dr Rob hoped this wouldn't be what was found, yet here we are.

Lumbar punctures are as uncomfortable as they sound, by the way.

So in the case of tiny-tumors, what do you shoot at or whack? Shoot everywhere with a shotgun? Well, that's a very bad idea with radiation therapy, as our bone marrow becomes shot by the nuking in very short order, which is all kinds of bad. And won't be happening.

Last week, Judy and I met up with Dr Sasha, the radiologist that's been looking after the spot fire tumour that flared on her left optic nerve. Despite his best efforts, she has almost totally lost sight in that eye, retaining just some peripheral vision. During that visit we reviewed her most recent brain MRI, where it was noted that the main ventricles, filled with CSF, were more swollen with fluid than the scan prior.

This ventricular swelling is a condition known as hydrocephalus, or colloquially "water on the brain". In Judy's case, pressure inside the head increases because the CSF can't drain out properly, and that has caused sharp headaches, and also her becoming increasingly wobbly on her feet.

A few weeks back, we got her a walking stick to cope with the wobbles. We had no idea of the root cause at the time, so in preparation for it potentially becoming a permanent fixture she chose one that suited her, that was modern, yet traditional, and of course matched the paint colour of her car. At the time, Princess Wobbly Legs was a bit self conscious about needing a stick at all, but our beautiful sons assuaged that by pointing out the similarity of her choice with star Aussie rules footballer Nat Fyfe. He "owned" his cane when he needed one, so why shouldn't Judy?

Dr Rob and friends haven't had a go at fixing this CSF problem yet, but they do have the beginnings of a plan. We're calling Dr Rob's friends Team Neuro. The team principal is Dr Gavin, a neurosurgeon, who coincidentally treated our son Seb for post-concussion syndrome a couple of years back. There is also Dr Ron, a neurologist, and Dr Jimmy, a physiotherapist.

Sounds like Team Neuro's plan will be two-fold: Fix the swelling and inability to drain CSF properly, as well as fight the cancer that is the root cause.

Fixing the swelling sounds nasty, and will involve installing a drain to provide an exit path to get pressure back to normal. To do this, Dr Gavin needs to drill a hole in her skull behind her ear, and feed a thin tube through her beautiful brain into the ventricle, then run the other end of the tube down into her tummy.

Fighting the cancer also sounds nasty. Our bodies have a wonderful protection system to prevent toxins getting into our brains, called the blood-brain barrier. Simplistically, this is a semi-permeable membrane that stops anything nasty passing from our bloodstream, which is normally a bloody good thing. When you're trying to fight cancer it can become a bloody pain in the ass, because chemotherapy drugs, which are intentionally toxins, normally get injected into a vein in your arm but these are blocked from entering your brain.

The only way to get chemotherapy into CSF is directly, hence bypassing the blood-brain barrier. And the best way to do that is to drill another hole in Judy's head at the front, pass another thin tube through her beautiful brain into a ventricle, and install a soft reservoir called an Ommaya reservoir at the top of her forehead. Once installed, very small amounts of a very short list of chemotherapy drugs can be regularly injected, and small amounts of CSF can be extracted for testing without need of further lumbar punctures.

In all, an unwelcome development, needing messing with beautiful places of Judy that are not without risk.

We've had yet another opportunity to go to emotional custard in the face of this development, as it is represents a significant escalation in the fight.

Whatever happens, our Judy will fight on armed with Dr Rob, Team Neuro, bright red lipsticked lips, and the best of positive attitudes. 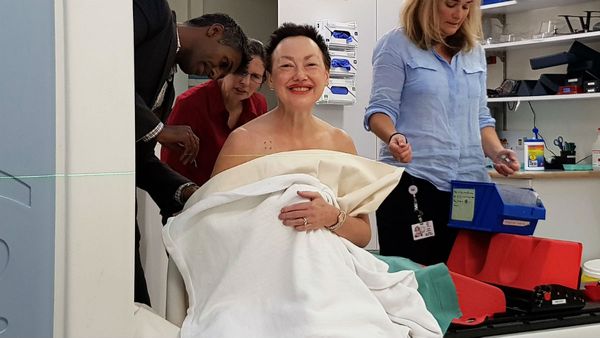