There is a fabulous test that Dr Rob and we look to in this arduous, hand-wringing and often depressing journey that is metastatic breast cancer.

This test is similar to a weather station reading of barometric pressure, which meteorologists can track over both time and location in order to predict which days will be fine, and which will be absolutely shitty.

For us, this is the cancer antigen (CA) 15-3 tumour marker. We call it The Number.

Heading down, in reverse to barometric pressure, things are brilliant, and The Number indicates blue skies to come and Dr Rob being on to a winner of a treatment. Heading up, however, we know things are about to get shitty. And the higher that the number creeps, the more shit weather we'll be in.

Unlike the weather, though, which you can deal with by chucking on an extra layer and grabbing a brolly, then think forward to the next week that will probably be fine, when The Number hits a storm upwards there is not much that we can do but hope. We hope like Hell that Dr Rob can doctor Judy out of it, because without his intervention one Hell of a cyclone would break loose.

In the past weeks, a cyclone has been forming, and there is little, it would seem that Dr Rob can do about it.

I promised time-to-time updates about The Number tracked in stories past, and so here is an update. Not a cheery update, but an update nonetheless. I started out thinking annual updates, but it would seem that an update is in order right now.

The black squiggly line in the chart below represents The Number, and ironically looks for all the world like the silhouette of a compact set of boobs for most of the way.

Our number, CA 15-3, has been called "cancer poo" by me in the past. It is the evidence that is shit out by this type of cancer as it actively grows somewhere in Judy's body, which is detectable by blood test. As can clearly be seen at the right, it has been rocketing skywards over the last couple of months.

It's rocketing despite chemotherapy, despite radiotherapy, and despite the wonderful Dr Rob and hope.

The impact of the upward trend is that the effects of the advancing storm have hit hard (with breast cancer in mind, I shall name it cyclone Shitty-Titty[1]).

Do accept our apologies in advance if we are a bit hard to get hold of right now. Judy has not really touched her mobile phone for the past few days, and sleeps a lot.

I have, however, been reading each and every mobile message of love and support to her. 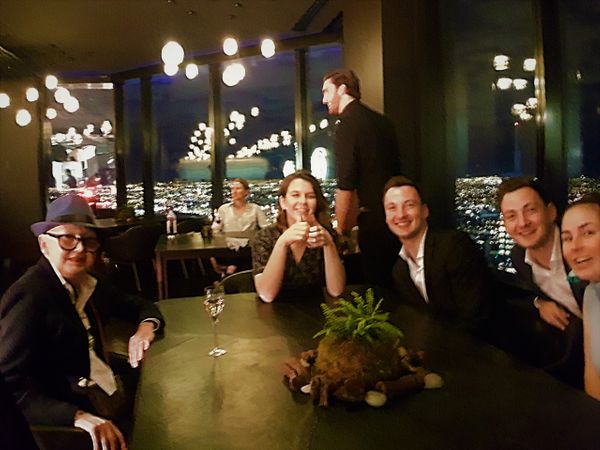 Home visits by Dr Rob are apparently a rarity. Given the long working hours that he keeps at the hospital, it's easy to see why - there is simply no more time in the day to squeeze in any more care. We love it that he cared to visit Judy.