The Great Lipstick Drought of 2018 saw only a hint of rouge applied briefly on one day in fourteen so far.

It took dinner in the city to do it, out to celebrate our twin sons' birthdays. At the same event, I also celebrated a super proud Father's Day, as Seb, Al and Judy had gifted me a dinner voucher.

Usually, we've got a couple of staples on the weekly dinner diet, with Pirate's Catch fish and chippery every Wednesday, and Mamma Mia Italian just down the road every Friday. We've now missed a couple of consecutive weeks at nonna's (as we affectionately call their family matriarch, Carmella), and last Wednesdays pappa's (as we refer to Con, who runs the fish 'n' chip). Both are less than five minutes from home, and both are quite transactional in-nosh-out eating, with low impact on Judy, but we've been struggling, and have not made it to either.

So to try and tackle Vue de monde, at the top of the Rialto Towers in Melbourne, noshing for some hours, was truly ambitious. Judy has been getting so exhausted so fast lately, having been awake for just four hours the day prior, yet she was groggily firm about going.

Booked was a top-notch tasting meal, full of delightfully crafted tasty treats, seated at a chef's table with views of both the kitchen, and across our fabulous city lights.

Dr Rob had telephoned me while we were heading there in our Uber fancy-Black, wanting to see how Judy had been since he saw her the Friday before. He echoed my concern that she was certainly no better, and maybe a little worse. He opined that he couldn't give her any more radiation, and that more chemotherapy would likely hurt her more than it fixes her, so arrived at apprehension expressed at continuing that treatment the next day. Ringing off with an undertaking to touch base with me in the morning to chat further about it, he left me with plenty to think about, and quite a bit to get upset about.

I tried (badly) to put it out of my head as we started our pre-dinner drink in Vue de monde's bar a quarter of a kilometre into the sky.

Our generously proportioned, leather-wrapped table then ready, we settled in and started with barely cooked veggie pieces smoked in paperbark as a finger food first course, accompanied by a fabbo-finger-licking good sauce.

Then lamb sashimi with fermented mushrooms and finger lime.

Then an oyster, swimming in lemmony goodness.

On to kingfish sashimi, with macadamia nut and another fabbo sauce, plus toasted kale atop that I scraped off and pushed to the side. (Kale: for the love of God, people, why?)

Then marron, head and tail done different ways, with a waxflower sauce (wax is a plant unique to south western Western Australia.)

And then chuck a mud crab on the barbie, with little sausages that looked like chipolatas but were most certainly anything but, delivered to the table on a mini rock BBQ smoking grill, with shredded kohlrabi stem (a wild cabbage that looks like a turnip) that were pickled something wonderfully, and a wild tarragon mayonnaise treat to smear, all self-assembled in a tiny house-cooked brioche bun: a bloody gourmet chipolata hot dog.

There were another eleven courses and two hours to come in this fabulous tasty-treat dégustation, but princess hit the wall, and hit it hard.

We had to leave.

I was gutted that the evening was a bust, and agonised about it being a bridge too far for Judy. Having ambition is one thing, but given I could already see in advance how it would end, reinforced by Dr Rob's call before, I felt so angry with myself for heading out and wearing her out.

Still, Judy had insisted we go.

So, it was credit card over to Seb, hoping he remembered the PIN, or could forge my signature, and Judy and I made a somewhat teary exit (well, Judy was fine, just completely puffed-out-stuffed-droopy-tired and needing her bed. I was the one blubbering...)

Seb and Al played on with their partners, and saw their birthdays out to midnight, full to the brim.

The next day, Judy didn't make it to her Day Oncology appointment on Friday. In line with a plan crafted earlier in the day by Dr Rob and I, she slept through departure as per schedule, and was blissfully unaware she had missed anything.

When she awoke at 7:00 PM to start a six hour day, she thankfully didn't get at all angry at me that we were just a teensie-weensie little bit fucking late to go get some chemotherapy. It wasn't even mentioned.

Dr Rob expects Judy to sleep more and more here on in.

He visited her at home on Saturday afternoon to see how she was. Dressed in casual jeans and polo shirt instead of his always suit and tie, he took some princess blood for testing, and chatted with her while she lay in bed.

Home visits by Dr Rob are apparently a rarity. Given the working hours he keeps at the hospital, often diligently and selflessly doctoring there late into the evening for the benefit of his patients, and then returning come morning, it's easy to see why: There would simply not be enough hours in the day to squeeze in any more care.

Although he would be careful not to let it show professionally, his visit to our home on the weekend spoke volumes that he is more than a little bit fond of our Jude.

MRI and CT scans will almost certainly not be used now to see how her cancer progresses, rather blood testing should tell him all that he needs to know. It can tell him whether anything like excess calcium is causing princess to be super droopy, and how her kidneys are functioning, and look for evidence of infection, and evidence of extent of cancer growth, and also a bunch of so much more that no pictures could reveal.

While he was visiting, we went through the current medicines she takes, and got rid of some non-critical pills, as swallowing them (and other things, like some foods) is a challenge now. The less of them the better on that front. Plus lately I've taken to mixing them with honey, and I've found there's only so many pills one should crush up and combine on the spoon, without overrunning the sweet taste and instead turning it into a caramel looking, nasty tasting sludge.

Thankfully, one of the pills to go was fluconazole, which is great for controlling thrush that one of the other drugs she takes can cause, but my God it makes her wee stink to high Heaven. Good riddance.

Sat at the kitchen table, Dr Rob and I went through whether Judy and I wanted her to stay at home here on in, and whether we could cope with it. He was quite sure that we were coping, and also that we would definitely want her to be at home, but was kind enough to ask, although he did suggest cranking up the home visits by Pal Care nurses who could help out with tips, tricks and the tools that they use all the time, like mouth sponges and handy waterproof mats (and ingenious ways to utilise shaving foam as we later learned.)

He reflected that if Judy were to spend any time in hospital now that she would almost certainly never come out. That was not because hospital would be bad for her, but rather because he expects Judy to get worse, and not better every day that goes by, and hospitals generally don't let you go home when things are worse today than they were yesterday. Fair enough. We expect, and they deliver a duty of care.

That discussion lead him to her prognosis.

Dr Rob has not raised any prognostication about how long Judy might live since the very rough guidance he gave on the day we first met him two and a half years ago. Back then he had inclined his guidance towards optimism with treatment, and strong pessimism measured in months without.

While not voicing anything since, he certainly would have been considering prognosis heavily, every step of the way, in order to advise, temper, vary and prioritise treatment, and also to minimise discomfort and reduce risk. He is not one for offering an opinion of duration unnecessarily, and I agree, as things do change, and can change fast. Or by the same token, can stay blissfully unchanging, sometimes without reason. Why add to worry?

A good case in point would be him seeming to become increasingly cool on the idea of Judy wanting to get a "port", which is an injection site installed under the skin below collarbone, with a catheter leading right into a major vein. This makes it super easy and painless to take blood, and give intravenous chemotherapy, instead of being stabbed with a cannula in increasingly used up arm veins at least once a week.

Getting a port does require minor surgery, and carries a risk of complications. Plus some of our holiday gadding about would have meant short-term post-surgery restrictions in terms of avoiding getting the site wet swimming, and discomfort, so he initially delayed so as not to impact lifestyle.

As it has transpired, intravenous chemotherapy is now something that he thinks is doing more harm than good, so he's advised us he will discontinue it for now, given her state. Anyway, the tumours in her liver, bones and elsewhere, which are kept at bay by those drugs are the least of her worries, so no port or cannula stabbing required for now.

Dr Rob would have seen a likely discontinuation of intravenous chemotherapy coming a long time ago, but there would have been no need to voice a prognosis, or say something like "don't worry luv, you won't need a port soon anyway." We'd just worry about the inevitable, and it might have got in the way of enjoying life. Loving Italy and France. Relaxing in the Maldives. Going to Vue de monde. Defrosting in Cairns. Critiquing German auto-maker dealer treats. Burning down an autobahn at 240 km/h and nibbling schnitzel in a pub that looked like a gingerbread house.

Intrathecal chemotherapy doesn't need any painful stabbing (which is "Metho T-Rex" methotrexate injected via her supplementary head plumbing), as the site is made numb by surgery. That treatment has been effective for quite a while now, but as Dr Rob explained at the outset, on this visit he restated that it does stop being effective after a while. He noted that the latest pathology indicated a disappointing increase in cancer cells seen in her cerebrospinal fluid, despite head chemo, indicating its effect may be diminishing. Annoyingly, there is a short list of just one drug that could safely do the job there for Judy.

So today, while Princess Slumberland snoozed in bed, there was discussion with me of prognosis during his visit at the kitchen table. It was not in any way rosy, but Dr Rob would have considered it now necessary to voice it, and that it was now relevant for us.

His best guess is that my princess has a few weeks left, maybe stretching to a month.

He reinforced with a warm and hopeful smile that there can't be much precision; it is just an educated guess.

Despite his considerable education that he demonstrates every day through wonderful care, I honestly hope that his ability to guess is fucking atrocious. 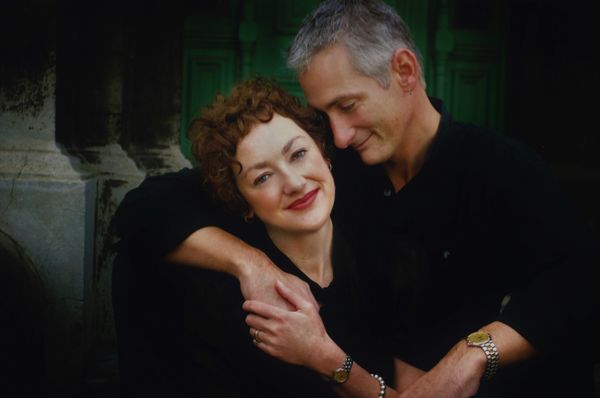 Judy slipped away this morning after a big and peaceful sleep, on her way to an even longer one.