This new Dr John is not to be confused with Judy's original Dr John, a surgeon and oncologist. Our Dr John the 2nd is a lady bits doctor.

He was not foisted upon her. Rather, Dr Janet offered her a choice of recommends: A lady she had trained personally, and over many years who she knew was fantastic, and Dr John, with whom she shared much respect as a peer. A woman choice, or a man?

To Judy, sex did not matter. What mattered was that he is a competent and respectful professional. And the choice to her seemed obvious given Janet's subtle urging expressions.

On Judy's first meeting with Dr John, he asked her straight up how she, the boys and I were coping. Oh my God. As first order of business. Dr Janet had shared with her that like our Judy he hadn't led a charmed life to this point, and his inquiry and its priority spoke volumes to that.

"As well as can be expected", she responded, then spontaneously combusted into a tearful mess. His reaction? "Its good to let it out. It's healthy." Judy was expecting him to say: "You all clearly need anti-depressants".

Quite the opposite. An outpouring of empathy meets sympathy.

Thinking about gynecologists reminds me of Kindergarten Cop. A fantastic movie from the very early '90s. The lead character, Arnold Schwarzenegger, played an unlikely kindergarten teacher, who is really undercover police officer John Kimble. In one scene, he played with his class a wonderful game of "Who is my daddy and what does he do?" Of all his tiny charges, my favourite little kid in the movie shares with the class with a beaming smile "My dad's a kynegologist. He looks at vaginas all day long."

Often the subject of jokes, their work is so important. The jokes probably stem from humour being a great diffuser, and given the intimacy of it all it's probably used as a brain defence mechanism. Think annual grease and oil change, instead of pap smear, and all that.

Even gynecologists sometimes use humour to encourage women to visit. I heard of one sending out reminder cards with a close up picture of a flower, and the words "It's time."

Judy expressed that she almost wished she'd brought me with her on her first visit with Dr John. I'm rather sorry she didn't, but in many ways I'm glad she didn't. The time spent reviewing the state of one's lady bits with one's lady bits doctor and his tools is a rather confronting and personal time. Probably best done privately. But sure, I would have loved to have been there.

Most women baulk at the "gyno" experience, with some skipping the indignity altogether until they have to. Or until it's too late.

With the recount (abridged) of that recent experience, I was reminded of the poking and prodding with gynecological ultrasound in the weeks before discovery of Judy's spread cancer. A beautifully normal ovarian ultrasound was racked up, with the viewing area being just a few centimetres away from active cancerous disease menacing nearby. It was completely missed. The clinician was understandably looking at ovaries, and not the unexpected metastasised elephant in the room just a slip of the wand away.

There are so many ways that our bodies can break down, and every day we as humans come up with ever clever ways to find the things that are wrong so we can try to right them.

It's so heart breaking that one of the most scanned, most prodded, most viewed women, and one most accepting of awkward and intimate prodding could have had this elephant missed so often it would seem, left unaware, unmonitored and untreated.

Judy never baulks at the indignity.

Life just isn't just, is it?

Early detection and treatment greatly improves the prognosis. The nature of this awful disease at stage four is that you're largely unaware until it starts to hurt. And even then, until it hurts real bad it's easy to write it off to life's bumpy mishaps and circumstance.

It took a sleepless night in pain to be the trigger for a whole torso CT scan that finally revealed this menace and its insidious handiwork.

In Judy's case it was unfortunate in the extreme that she experienced recurrence. Dr John and his kind, along with Dr John her first, for all their good and diligent intention couldn't find the spread sooner.

Despite that, for so many women, a regular grease and oil change at the gyno can save their life, and head off at the pass some real nasties like ovarian and cervical cancer, that like breast cancer at stage four are not considered survivable.

And again for that, hats off, Dr John. 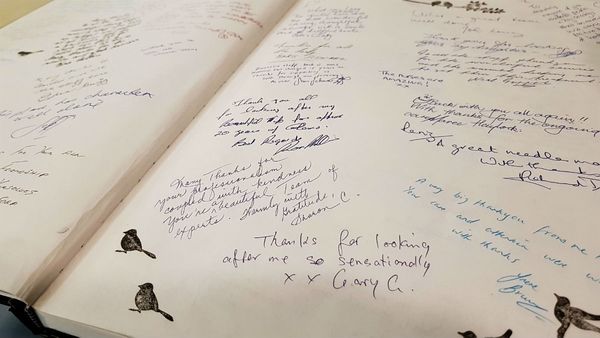 The Day Oncology nurses are expert with a cannula, and also expert with kindness, and Judy and I are thankful for each and every one of them.