This cancer business is a strange business of fast is good, and also slow is good, both at the same time.

For writing about it, slow is definitely good. Maybe I'm a bit slow or something, but more likely life accelerates in the shadow of that which is incurable, and oftentimes I just can't keep up.

For living with cancer, slow is definitely brilliant.

Metastatic breast cancer, being incurable, increases the value of every second of every day. Like an hourglass super glued to a kitchen bench, Judy an I know that each drop of dribbling sand is only ever going to run one way, and being fixed down, the option of flipping the darn thing over to have another run through won't be possible.

Sometimes Judy just wants to be left alone. To have a break from prodding, from being in the shit, and from feeling overwhelmed. Slow things down, and take a break, or take off on a relaxing holiday and try to forget for a while, and just live every second with the ones she loves.

In disagreement, some days she and I do want things to speed up, and get stuff done. Some days we're hanging out for a scan that may answer questions, or for a blood test that will tell whether things are working, or to get to the next chemo treatment to further smack this bitch of a disease right in the cherry.

All the while, while swinging between speed up and slow down, we've absolutely no idea how much sand is left yet to dribble, but we know it's considerably less than the next person.

In packing a lot into a small space of life, at speed and at leisure, a lot of stuff happens. For me, trying to write it all down in a journal of Judy's experiences, much of which is a timeline, often sees brilliant little stories left in the wake. Life gets so fast that they're lost in irrelevance because of a lack of time to write them down when there was context. The moment's gone, so to speak.

Also, some brilliant stories are micro stories in their own right, and don't make it into larger chapters for whatever the reason. Again, context, I suppose.

Still, they are stories that deserve to be told, however briefly, as they are some of those grains of sand falling both recently, and in the past, which have fallen brilliantly. And if Judy and I and Dr Rob have anything to do with it, future grains of the same will continue to fall in abundance.

So here are some of these unforgotten but left behind unwritten grains. Trickles of sand in a two-speed life.

Princess tries her luck at Bellagio

A hot day in Bellagio, Italy, spent slowly wheeling and exploring, and wining and dining, while holidaying on lake Como with my folks.

While rolling about, we bought a gift for Dr Rob in the form of a silk tie created by art-meets-function designer Pierangelo Masciadri, which seemed perfect given we have rarely seen Dr Rob without a perfectly tied collar accessory. He is self-described "old school", dressing impeccably for each doctoring day to give him a form of apropos armour to face whatever the day brings.

So another piece of armour for you, Dr Rob, to guard against any chinks.

We happened on a hip joint in Aix en Provence, in southern France, for dinner by unintentionally going the wrong direction down a street, which was as unfamiliar as the next street. Sometimes brilliant experiences come from making a slight fuck up, don't they?

At the table next door sat a group of youthful French, chatting and squealing, and gossiping, and catching up while looking gorgeous. It was a local casual dining experience that was brilliant. And then the awful off-key singing started...

Princess takes a day off

A cancelled early morning train connection out of Zurich threw the best laid plans of a Glacier Express train trip out the window.

The Glacier Express is the slowest express train on the planet, winding its way steadily between Zermatt and St. Moritz in Switzerland through stunning mountainous countryside, over 291 km of tracks and 291 bridges while going through 91 tunnels, all viewed from panorama carriages.

Damn. We were disappointed, as it was a missed opportunity for an experience that won't come round again, yet we made the best of the early wake up by rolling Judy's personal panorama wheelchair carriage around Zurich under clear and sunny skies, finding our own bridges and tunnels and tracks. And a sunny pub.

If you say any of Judy's morning tablets at the moment with an Italian accent, it just works for some reason.

Going through the check list with Judy, with me in full Italy-out-loud voice cracks her up.

As a cute little teen, Judy learned Pitman 2000 shorthand working as a secretary.

To this day, she's kept the skill, wowing everyone in the police force (who in general, with no disrespect, write longhand and type with two fingers), and has occasionally had to dismiss colleagues insisting she can't write her notes about crimes in shorthand. They're her notes, after all, so write that way she will. All it says in the rule book is that she needs to be able to read them.

Annoyingly I haven't found an app available to translate this scrawling, which looks like gibberish to me, so, damn it, I still have no idea what's noted down on lists for me at Christmas time.

Judy's memory for numbers is extraordinary (and exceptional for most other things, for that matter).

Her hospital number? UR 5145783. Spouted at brilliant nurse-WTF-catching moments.

Credit card number? No problem, with expiry date and CCV.

And everybody's registered police numbers at work? "Bloody heck. How the hell do you know that, Jude?"

Without fail the numbers flow, even after being shot in the brain with radiation.

Resuming work from a holiday in Portugal and Spain, a most relaxed Dr Rob eventually found us at the tail end of a full Friday for Judy in hospital.

Gloriously, he and his wife had dodged a heatwave period of record-breaking heat in the region by mere days, chalking up memories that were instead comfortably warm and awesome. We had been hearing stories of the oppressive heat in the news here at home, and worrying about his pale complexion coping. We were super grateful to see that when he returned that he hadn't melted.

Smiling, and exchanging holiday experiences, and stories of AFL sport past and the likely near future of that sport (Dr Rob is an avid Essendon Football Club follower), we were most relived that he was back. His smiles spoke volumes of the stories that he would be re-living of wonderful holiday places, in quiet moments during the weekend to come, and also many weekends thereafter.

A lot of the stuff that I write about is hard to read. I get told as much by so many I know, who tell me they laugh and they cry their way through both the good shit and the bad. That tells me I am doing something good by writing this all down. It tells me that all stories, both the brief and in full are so worthwhile telling.

Here's to the little unforgotten stories being as important as the big. Live them large.

And so here's to the little grains of sand being as important as the flow. 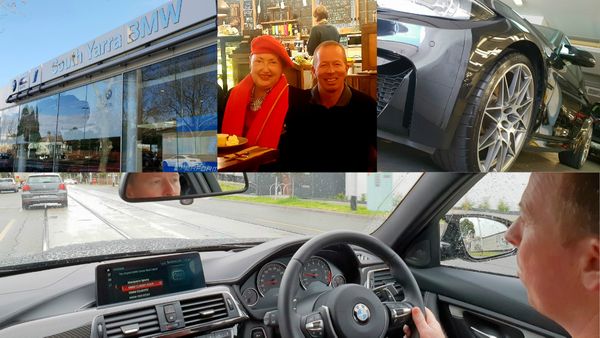 Princess ditched her wheelchair today for something with the same number of wheels, but something that made a lot more noise than can come out of me while pushing her chair.