I remember almost every minute of the day that Judy and I were married, just over twenty two years ago.

The lead up wasn't seamless, with the blushing bride-to-be coming down with the worst case of chicken pox that her doctor had ever seen in the weeks leading up to the day.

It is truly awful for an adult to have chicken pox, by the way. There is a nasty viral fever that can't really be fought with anything, and just needs to be rode out, and for Judy that seemed like, and probably was weeks. Then the villain of the story, the dreaded pox, seemed to keep coming up, more and more, and more. Everywhere. In places you don't want to imagine. In time, these eventually turned into disc shaped scabs that shed, and shed. Everywhere. Hundreds of them. Her doctor quipped that he should take pictures that could update the text books that illustrated what a "bad" case looks like. Judy's was next level.

I'll spare you any pictures.

The invites were long sent out, everything was booked, deposits paid, but we had to delay by three weeks. We needed to, to let Judy recover. Well, that and we didn't want to infect a church load of well-wishers.

Delay meant changing the day for church, guests, reception, photographer, flowers and more. I was in awe to hear of how accommodating everyone and every business was.

One of the only bookings not changed was our honeymoon. Everything else was rescheduled, but amazingly we were able to leave international Hawaiian departures as they were, and this resulted in the traditional right-now (after kanoodling) honeymoon whisking away, instead of the cool-your-jets for three weeks originally planned.

Judy finally swept down the aisle on the revised date, to the traditional "Here comes the bride", the Bridal Chorus by Richard Wagner (also known for his The ride of the Valkyries), played on the thunderous church organ at Holy Trinity. A traditional church.

My heart froze as Wagner's thunder roared in that organ. It seemed the world skipped a beat with me.

She was so beautiful.

I was mesmerised, frozen, captivated. I was the luckiest bloke on the fucking planet. The church, the well-wishers, the organ, flower girl sister Rebecca, best man bro-in-law Howard, priest, everything faded into insignificant background at that moment.

All I could see was her.

Recovering, and getting my shit together enough to actually talk, I remembered my vows by memory on the day, and mercifully didn't fuck them up, despite Wagner. I remember them in my heart to this day.

"I Steven, in the presence of God, take you Judith to be my wife. To have and to hold from this day forward, for better for worse, for richer for poorer, in sickness and in health, to love and to cherish, as long as we both shall live. This is my solemn vow and promise."

Traditional vows, that resonate brilliantly. Some folks like to mix it up with their own words, but you can't one-up the traditional basics. Yes, there have been poor times, both fiscal and experiential, which we'd like to forget, but they haven't defined us. The richness of our lives together grows. Yes, there has been the loving and the cherishing, which I still love and cherish. And there has been health, and yes, now sadly some sick.

Our priest, Father Keith continued, "It is a life-long union in which a man and a woman are called so to give themselves in body, mind, and spirit, and so to respond, that from their union will grow a deepening knowledge and love of each other. In the joys and sorrows of life, in prosperity and adversity, they share their companionship, faithfulness, and strength."

Contemplating this stuff is a hard stuff, and I'm not sure that I'm ready for it.

Apropos of Judy's cancer 2.0, I watched a Ted Talk on just this subject, spoken by a doctor, Lucy Kalanithi. Her brief fifteen minute talk about her experience with her husband's cancer illness held me enthralled, aghast and smarter for what seemed like a much longer time than it was. That talk was entitled: "What makes life worth living in the face of death?"[1].

The concepts she discussed were delivered in places quite clinically, not surprising given that Lucy is a doctor, as was her late husband Paul, but most elsewhere she spoke with such conviction and honesty, and with such passion and love that her words could not possibly be ignored, and they touched me deeply.

It reduced me to tears, as you'd expect, given Judy's circumstance. And it made me think a lot.

But being made smarter by hearing it, I still found, and still find myself avoiding many of the thoughts it evoked. I don't want to lose the love of my life, even though I know we can't go on like this forever.

So not in fear of death, but under the shadow of it being inevitable, we'll keep living life the best way that we can every day, enjoying our time together, and keep on growing the richness of our journey together.

Till death us do part? I think not for our souls. Tradition might hold it as a severance, but I think that it will just be a temporary and inconvenient time apart.

You've probably never read a translation from German of Treulich Geführt (Bridal Chorus) from Richard Wagner's story of Lohengrin. In fact, you probably didn't even know the music had words, other than the parody "Here comes the bride, big fat and wide, slipped on a banana peel and went for a ride..."

Faithfully guided, draw near
to where the blessing of love shall preserve you!
Triumphant courage, the reward of love,
joins you in faith as the happiest of couples!
Champion of virtue, proceed!
Jewel of youth, proceed!
Flee now the splendour of the wedding feast,
may the delights of the heart be yours!

This sweet-smelling room, decked for love,
now takes you in, away from the splendour.
Faithfully guided, draw now near
to where the blessing of love shall preserve you!
Triumphant courage, love so pure,
joins you in faith as the happiest of couples!

I think it ironic that this music is so popular at weddings. The story of the stuff of legend bloke and chick for which this bridal chorus was written, Lohengrin (an outed Knight of the Holy Grail) and Elsa, is one of the many tragic operas. It does not end well for his bride.

But, Elsa didn't have Dr Rob the oncologist in her corner, did she? 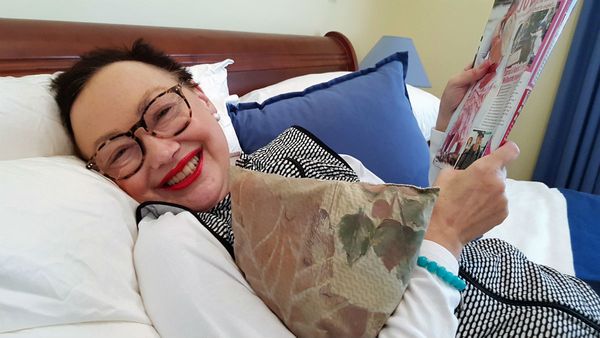 Harking back a long time ago, Judy was admitted to hospital to have a little lump chopped out of her boob. The experience was made a little better by a plump little cuddly buddy.