It's funny that I think that some cancer experiences I share with Judy are unique. Sadly, most are probably quite common.

This stands to reason given the number of women falling prey to this breast beast, and the number of people in general attacked by similar cancers.

I suppose this self-centered expression of uniqueness of experience is a bit like looking up at the heavens and declaring that our beautiful blue ball of a planet, so teeming with beautiful life, is the only place in the universe where anything lives.

Somewhere out there will be more life.

It is far too probable given the scope and the scale we can see for it not to be the case.

It has been estimated that there are over a million, million, million, million stars in the observable universe (one with 24 zeros)[1]. That's quite a lot, really. Sure, many of them will be boring from our point of view, but you could almost guarantee that many others will be far less boring, even if it's just ten trillion of them. That rather large guess of mine is but a tiny fraction of the total (just 0.000000001% if you do the math), and assumes that there is just one little blue ball like ours for each galaxy in the observable universe. I'm probably low balling it quite a bit, given how large galaxies are.

But I digress. Back on Earth, and to Judy and our improbably unique experiences, the pillow is probably a good case in point. And others will have had this experience.

Harking back a long time ago, shortly after Judy accidentally discovered a lump in her right breast a couple of decades back, she was admitted to hospital to have that little lump chopped out.

At the time it wasn't enough to just remove it. Her Dr John needed to understand whether that malignant lump had metastasised, or spread, and the easiest way to get a good feel for that was to chop out a cluster of nearby lymph nodes in her arm pit and have a look at them under a microscope. Depending on what was found would decide what treatment was next.

In the picture below it would be easy to miss the very neat underarm work of Dr John, her surgeon. That's understandable, given the reclining babe in Cancun, Mexico resplendent with glorious ribs distracting (I have a rib fetish, OK?) There's quite a lot missing in that armpit. 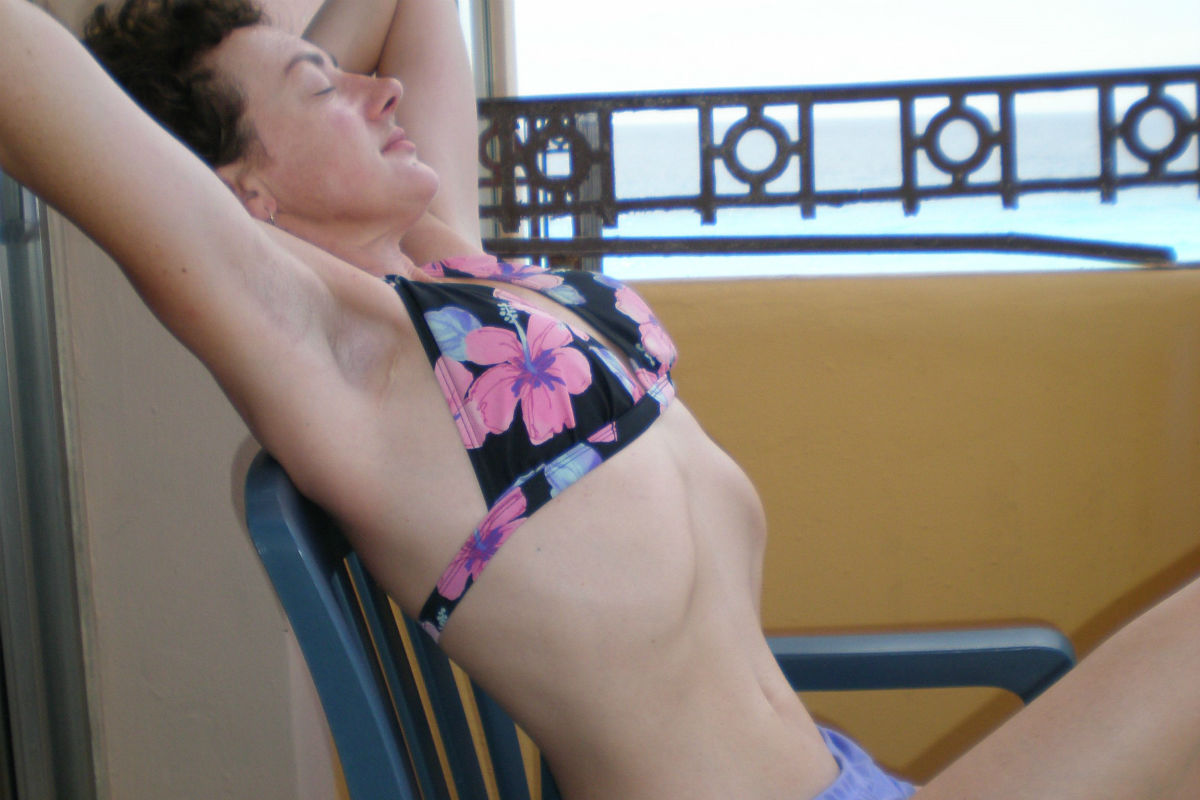 The lymph nodes are a great way to work out whether cancer has spread, because oncologists know the lymphatic system is almost certainly the vehicle for initial travel.

I like to simplistically think of our blood system as the fresh water high pressure plumbing in our bodies, and the lymphatic system as its sewer. We find all sorts down there, including bacteria, dead and dying cells and other stuff that needs to go somewhere. If you find breast cancer cells in the lymph sewer near the original site, then you know you've got spread. And a big problem.

Now, I've had the odd pimple in my arm pit, and I know what a pain that is. Some ladies may have got a shaving cut in a pit, and also would know that's not fun. But I cannot imagine the pain and discomfort of having a surgeon chop out all your lymph nodes there, then stitch it up, then have it heal.

It was Hell for Judy.

And for a long time.

To cope with that kind of cutting, chopping, stitching and repairing, the last thing you need is for your arm to rest by your side. You want some kind of gap to prevent pressure and chafing, and get some air to the site of the wound, how ever you're lying or whether sitting, standing or walking.

This brilliant little twenty centimetre square pillow was created and provided by a group of volunteers working the hospital Judy was in at the time. Not only did it help with keeping that wound healing, it was a point of focus and of comfort.

Judy became understandably obsessed with it. It was everywhere she was.

She sat with it. She slept with it. She hunted for it in the middle of the night after losing it in sleep. It came to dinner, it came to lunch. It rode in the car. It went to the toilet. It did makeup. It went on holidays abroad. It relaxed by the fire. It even had sex.

There was a seemingly abundant and endless supply of these plump little cuddly buddy pillows on offer to those in need, lovingly stitched together by those prolifically charitable ladies, but none were the same as her original, which continued to stay faithfully by her side.

That pillow became as one with Judy's form.

That's not surprising to me when I reflect on the utter fucking shit that she had to endure at the time.

Having a lump out is not that bad, but lymph nodes out too is awful. And recovery for the combination needed a drainage system to be installed during surgery consisting of a lot of plastic tubing. God knows how they put it in there, but it needed taking out once it had done its job, as it was only a temporary set up. So many days later Judy endured nurses pulling out what seemed like metres of drainage tubing from her body. The most robust of constitution would not cope with even the thought of that, let alone the feeling.

This same helpful individual proceeded to scare the absolute shit out of her with talk of the likely complications of having your underarm lymph nodes removed. What a perfect topic of conversation so soon after feeling plastic tubes being pulled out hither and thither from within, while wide awake.

Much later, with time healing wounds, there were attempts by her at raising her arm away from the pillow. A slight arm extension was excruciating for ages. Lady luck, being a cruel bitch, added to this on one occasion by simultaneously positioning a bee under foot (which stung) while she attempted to raise that arm. You've probably read the Dr Seuss book with your kids "I Had Trouble in Getting to Solla Sollew"... Talk about a literal Skritz from above and a Skrink from below compounding her troubles.

The pillow was with Judy way longer than she needed it, physically at least. It was a progression from need, to want, to obsession. And I think that's beautiful. Our charitable ladies would also think it beautiful and would most certainly swell their bosoms with pride at the indispensability of their craft.

You'll not be surprised, though when I let you in on a little secret: She's got prior form for this.

Before cancer, during pregnancy, that pregnancy being most heavily laden with our twins, she adopted an under-leg pillow to try and get some measure of comfort. Some twenty two years later, she still straddles a pillow to this day in bed. (And as soon as I depart our nuptial bed of a morning, my head pillow is appropriated for the task, whisked between thighs. I don't complain.)

"I was telling mum about my under arm pillow, and my under leg pillow, and she replied: Well, you must be a joy to go to bed with."

All the pain and discomfort of having those lymph nodes chopped out so long ago was so worthwhile, though. Dr John and his pathologist helpers did find a small number of breast cancer cells in a fraction of a lymph node, and resulting was a treatment of chemotherapy with radiotherapy then seventeen years of blissful absence of detectable disease.

With the experience, I think that Judy likely joined thousands of women in their collective and unique pillow obsession club. But thinking while gazing up at the stars, Judy may be one of a pillowhood sisterhood of trillions.

Whether among thousands or trillions, to me, she is unique.

(And she's still got that little pillow.) 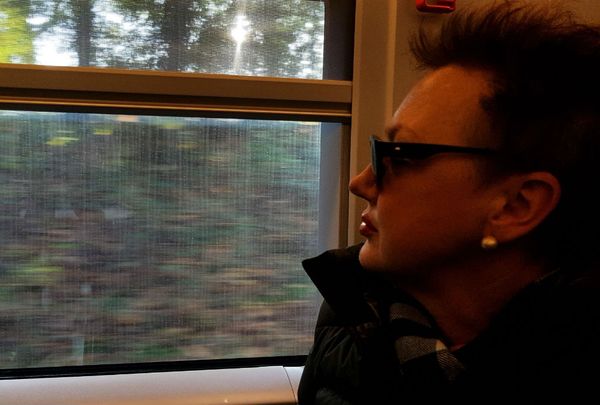 Meeting in hospital, Judy and Sue have since shared a ton of memories, many over a caffè latte and a piccolo low tide latte.