You're in a hospital emergency department.

Imagine along with me a nurse who tends to you. A male nurse. A slightly stocky man, with friendly, happy, chubby, ruddy cheeks. Now add a bushy ginger beard, and complete the mental picture with a super thick and cheeky Irish accent.

He's excited and happy to see you again after so long, and straight away knows who you are. You're a bit foggy in remembering him.

Then imagine this man launching into teaching you how to manage your urine catheter bags at home. Listening to his voice, you try hard not to smile during the lesson.

It seems surreal to you to need to learn this stuff, and it is all the more so as images of ginger bearded leprechauns bring distraction to your head as you listen intently.

Why on Earth are we imagining this?

The most bizarre twenty four hours preceded Judy acquiring a tube stuck up her wo-wo water works draining to a strap-on wee-wee bag attached to her leg. Because it was a bizarre day I guess it was fitting that the day's doctoring ended with the surreal lesson delivered as just imagined.

These twenty four hours were an absolute blind-side.

Judy has become one hundred percent dependent on me over the last month, because cancer, or maybe because treatment of cancer. The physical dependency started out with me wanting to be with her all the time to prevent her injuring herself by falling down, but has developed into her not being able to get up from sitting by herself, certainly not getting up after falling, nor walking unassisted.

Beyond this recent physical crap, in this twenty four hour period things took a strange twist. A behavioural twist.

And it scared the shit out of me.

She was tired all day Friday, and slumbered for a lot of it on the couch. Admittedly we did get up early for a hospital visit, but Judy had gone to bed early the evening before so that shouldn't have been an issue. Even when awake during the afternoon, often her eyes would drift slowly closed in a waking sleep, sometimes in the middle of a conversation. Other conversations she'd just stare blankly when asked a question, then on being re-asked a couple of times would answer. As the day wore on she got progressively more tired, and more disoriented.

She was visited at lunch during the day with some tasty treats delivered by a friend, and was quite chatty.

Then mid-afternoon, my super step-mum Barb visited to deliver a beautiful new slinky outfit to wear at up-coming events. Judy was drifting. It was like she was focusing very hard on doing simple, little things, like to try on the new outfit while seated on the couch. She was annoyed at help, and decided it was too hard to take off any current clothes, so painstakingly "slipped" the slinky, stretchy outfit over the top of what she was wearing. That'll do.

To view it, it could easily have been hypoxia, being impaired by a lack of oxygen, or like she was seriously sleep deprived, or like she was whacked out by too many painkillers. But I knew all these were not the reason.

There was no usual glass of wine at the end of the day, there were no TV soap stories watched during the afternoon, there was no enjoying Friday night football, there was no trip down the street to our beloved every-Friday Italian restaurant.

Steve: "Are we going to Nonna's for Italian tonight?"
(Wheeling Judy in her wheelchair for a wee)
Judy: (Emphatically) "Absolutely."
(Wee done.)
Steve: "OK, let's get your boots."
(Turns left to bedroom to get shoes)
Judy: "Where are you going?"
Steve: "What?"
Judy: (Somewhat irritably) "We're going to the couch..."
(A short time later, lying on the couch)
Steve: "Are you all right to go to Nonna's? Shall I get your shoes?"
Judy: (Looks. No response. Then looks a little shocked, rising somewhat, then sinks back down. Still no response.)
Steve: "Alright to go? Do you want to go?"
Judy: "Sleep."
Steve: "Do you want to go to bed?"
Judy: "Yes."

Asking again a short time later if she wanted to go to bed (at six thirty PM) she turned her head away from me and looked at the couch with an expression like she shouldn't be seeing it. Her expression looked like she thought she already was in bed, and couldn't work out how she got on the couch.

This had fast turned into a wholesale different day than a usual day, and especially different than a usual Friday. The physical cancer challenges we can usually overcome, whatever it takes, and continue life-business as (an abnormal normal) usual, but today this disorientation palaver beat us.

She was in bed at a highly unusual seven thirty PM.

As the evening wore on I became increasing worried, and I thought increasingly about what had been experienced throughout the day. With Judy's mobility getting worse, not better with more chemotherapy, and now this, I racked my brain for possible reasons. Thoughts of cancer in her cerebrospinal fluid, thoughts of head chemo, head surgery, possible subdural haematoma shown on a scan, infection, steroids.

In quite a lather, by eleven thirty at night I needed to talk to someone, so I called the "Pal Care" after hours hot line for some independent, objective, level-headed chit-chat, instead of persisting with Dr Google.

Our pal from Pal Care was lovely, listened intently, asked all the right questions, advised to keep her pain medications coming, and organised attendance in the morning.

I got a couple of oxycodone into her at three thirty that AM, after a squeaky "No, no, no, no, no", with nothing else verbally communicated. All the while at every movement you could see pain clearly written on her face, given the last lot had been taken just once after waking early in the previous day. She usually takes that stuff three times, sometimes four.

At nine thirty the next morning a Pal Care nurse arrived. More oxycodone. At eleven the ambulance arrived. At midday, Judy arrived at the emergency department.

Given the unusual confusion and disorientation, and the cancer elephant in the room, my expectation was that they'd scan her beautiful brain for any weird stuff going on, but there was none of that. Mostly just hours and hours of observation, over which Judy became more and more "with it" (much to my relief).

Late in the day, Judy needed a wee. So a male nurse produced a bed pan while our male emergency department doctor hovered.

Now, bed pans are uncomfortable, yes? Especially with men folk hovering, and also especially when you're laid almost flat, and on a hospital wheelie bed. Girls go sitting up. And Judy doesn't do bed pans well anyway. It is fair enough, I say, that not much happened.

When she couldn't go, this was an emergency that they could deal with. This was a real tangible problem. The nurse grabbed a magic wee-wee ultrasound scanner and measured that she had 700ml on board. Huge! Brilliant. Fixable. So next thing a rapidly assembled crack wee-wee team swarmed, solved the problem, and sent her home with a nappy on and a tube out her minky wo-wo. Plus handy and mobile leg bags, a supply of larger overnight bags, and spare straps, and all sorts for the weeks (!?!) ahead.

The poor girl just needed a normal wee in peace.

The emergency team did call Dr Rob while we were there, but when I ran through the weekend events with him on Monday, and described the lead up to being in emergency in the first place, he listened intently as if hearing an entirely different tale to what he expected.

They hadn't mentioned disorientation, confusion or any of that, and rather made it all about her water works. Rob had been left with the impression that was why Judy had ended up in emergency.

An hour later the catheter was blissfully gone.

He ordered whole body CT and MRI scans, which revealed most unwelcome and brow-furrowing changes in the form of new cancer nodules in her beautiful brain, and elsewhere in her nervous system, and it has been likely that these cancerous nasties are what are messing with her mobility, water and soil works, and (although not conclusive) probably were the cause of blankness and confusion.

Dr Rob mentioned a form of epilepsy, called absence seizures, which could be an explanation for some of the Friday oddities, given cancer is messing with her beautiful brain. Absence seizures typically cause lapses in awareness, sometimes with staring, and so could be what we experienced.

Whatever it was, it wasn't just because she couldn't do a wee with an audience.

Now at the tail end of the week, thankfully my beautiful Princess Wobbly Legs is back to one hundred percent cognition.

A cancer emergency is likely brewing, but clearly it's an emergency that's not well suited to an emergency department. Dr Rob is already mulling some proactive doctoring options to try and stop this getting too far out of control.

This cancer, she twists, and she turns don't she? 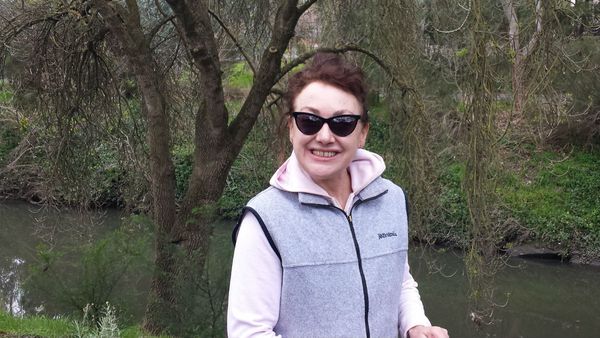 My little princess goes by many nicknames. Many of these capture her wonderful spunk, but many also make light of the embarrassing and confronting stuff cancer throws up. Whatever the nom du jour, or merde du jour, she's always my princess.