Once upon a time, a little princess traveled a long way to a strange land that was full of uncertainty.

At first, while venturing about in this place, many things struck her as odd, twisted and sometimes shocking, and she wondered at the evil behind them.

Yet even though the land was full of confronting things, it was equally full of wonderful people, so in time the princess made lots of friends, and laughed a lot with them. She yearned to return to her life before, yet embraced all that was around her, and before her.

An odd thing she found in this new world was a grey mist that hung everywhere, which dulled colours and clarity of vision. It wasn't a normal mist. It seemed a living thing, and she felt like it wanted to consume all that was good, and also to intentionally hide monsters so they could lurk in the shadows. The mist also seemed to spread the uncertainty, and made it harder to be happy.

On some days the mist would get thicker in places, and hide some people from view. Then when it cleared, all that could be found of those it had enveloped was a sense of hope, and happy memories of laughing together with those that were now gone.

The little princess didn't like the mist at all.

"I'm writing a fairy tale."
- Steve
"Sure you're not writing a horror story?"
- Judy

We're not exactly sure when we started making up these names, but it was not long after this cancer business invaded our lives again. Judy reflected that it was probably an overreaction to being called a "drama queen" at one stage, and I suppose also combines with a fondness of hers of a line from the Schwarzenegger movie Kindergarten Cop: "I'm a princess, not a police officer!"

Every one of her friends will have seen Princess Red Lips rocking her every-day signature made-up former flight-attendant-groomed face, resplendent with powerful lip colour.

Next, there is Princess Hot Lips, involving much "pash rash", lipstick communication, and prompting many of our friends early in our relationship to plead with us to "get a room".

Princess Crinkle Nose is an obvious one, too, with Judy always smiling a whole-faced smile.

Cracked lips at times has coined Princess Plum Pudding Lips. Slathered in Blistex lip balm (a distinctive and yummy taste) every time I kiss her she tastes like a tasty dessert treat.

As the crap of cancer has worn on, the ante has been upped for noms de guerre for my princess.

Afinitor the Mighty and Aromasin the Amazing were a combination therapy that wonderfully fought back her cancer for nine months or so. Yet while wonderful, the list of side effects at the time were less so for Princess Itchy Spew Guts.

She was Princess Pissy Pants at one point. In hospital for far too long to be tolerable, she was going through a fist full of undies every few days, mostly because getting up and out of bed for a leak involved quite a bit. Poles and tubes and more came along for the ride. She had a drip in her arm, pumping in plenty of fluids, which annoyingly hampered progress on the way to get rid of it.

Princess Yoghurt Lips visits some mornings. Many medicines, like the corticosteroid dexamethasone, and some antibiotics need to be taken with food in your tummy, so a daily breakfast ritual spawned that moniker. Too much food, and enter Princess Queasy Tum.

Of late, she's Princess Wobbly Legs, owing to cancer likely messing with nerves in her lower back. These nerves also control things other than her legs, which has seen surprise visits at times from Princess Pissy Pants and her unnamed evil twin hash-tag-two, and after some janitorial, Princess Fresh Bottom.

"Could I be Princess Fussy Pants? I need a fresh face washer and towel, please."
- Judy

And the latest additions? Princess Droopy Eyes, Princess Sleepy Head and Princess Loopy Head. An unexplained and scary Friday of slow responses and disorientation, which ended in a hospital emergency visit the next day was their genesis. Thankfully P. Droopy and P. Loopy have not returned. We're still not entirely certain what was going on there.

Also of late, Princess Independence was coined. This little princess can be quite frustrating. I try and be there with Judy all the time, but when Princess Wobbly legs has got a bit cocky she reveals her alter-ego and nemesis, Princess Independence. When that happens, we generally have a big princess crash on our hands. I left her for five minutes more in bed before getting her up the other day ... and then she needed a toot on the dunny ... and then a blood curdling big scream, a big crash, and a big dash by me to the scene. And a big cleanup.

Some of these names are cute, and some make light of embarrassing and confronting moments. We're all human, and we all do stuff in private that we'd rather not share with others (but you will share in future with less dignity, I can assure). My princess and I do it all with good spirits, and with a bit of good humour. I know we will handle any escalation equally well.

We hate plenty of it, but we love that we handle every bit of it so well together.

So getting back to our traveling princess, trapped in a misty and strange land, to finish that story she did a lot of good stuff, helped a lot of people, hooked up with a supurb bloke, and then as fairy tale endings go, the princess and her prince lived happily ever after. 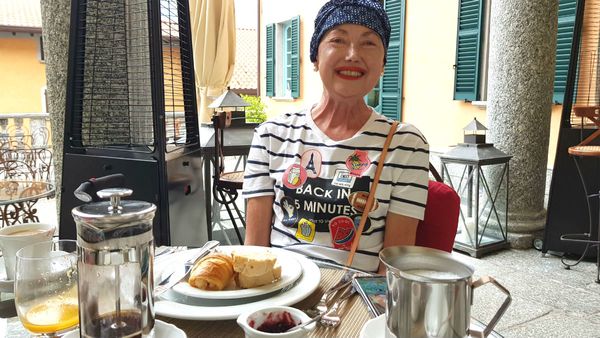