The things we humans love to surround ourselves with are tools that we use to live a seemingly brilliant life. A house. A car. A cat or dog. A better house. A better car. Money for fine clothes, money to gain things that others do not have, or money just for amusement. We humans are like Bowerbirds with stuff and money.

Don't get me wrong. It's all good stuff. It certainly is for the Bowerbirds who use the stuff they collect to grab a mate.

Again, don't get me wrong. I fall for this stuff every time.

And also don't get me wrong, entertaining everyone is brilliant, but it could be done in a tenement or a palace. What matters are the interactions. The people. The evolution of the Hutch reinforces this ... whether a tired chipped painted concrete floored piecemeal affair, but with everything in the right place and brought to life by a Greek "hack" builder, or Judy-designer Stanway-executed luxury. The Hutch is somewhat a spiritual place to me because of this. It was socially brilliant before, and is still socially brilliant.

Sure there are things with meaning in our house. Judy's grandpa's desk, for instance.

The desk most certainly does not sum up the man and his legacy, but it is a close tie to him and to his memory and legacy, and to history.

His legacy was probably most defined by his toil at war to gift freedom to many people he didn't even know, and millions he would never know even exist. He would have understood the gravity of his actions at the time, though.

This year marks the 100th anniversary of the men of the Australian Light Horse and the battle of Beersheba, a brilliant Australian story of World War One. Judy's grandpa was mounted on horseback charging right with them at that battle.

The desk was a gift to him as his role of a secretary of the 4th Light Horse Association, and a wonderful reminder to us that he survived that most bloody war, that successful battle, and that he went on to serve afterwards with the men he rode proudly beside in their post-war 4th Light Horse.

He survived his defining time. As Judy and I hope she survives the battle of breast cancer.

Although our desire is that cancer not be the thing that defines her and her legacy. Sure there is no current cure for stage IV breast cancer, so it will probably rule our lives from now on, but equally probably her legacy will only have a little bit to do with that cancer.

So the desk as stuff is special. But some stuff we have carries lots of memories that Judy or I would rather not have, and an example is our upright piano.

This was purchased at great expense when Judy was a little girl (but worth almost nothing now), on the back of a throw-away comment by her grandma that she had "beautiful long musical fingers". To be blunt, Judy fucking hates it. A load of emotional baggage is recalled just by her looking at it.

She recalls having to get up early before school to do scales. She recalls being made to play on demand to entertain dinner guests. She recalls visits over the years during her adulthood with requests to "play for me". I guess her mum thought that if she was paying for the lessons some pay back was in order.

I think the piano should go.

Other stuff in life really doesn't carry any significant memories, like furniture and knick knacks that may be inherited.

"Why would you care about furniture? They were obsessed with buying antiques, but at the end of the day it's just stuff. Bought at an auction house. And it has someone else's story that you don't even know."

Maybe a disregard for antique furniture is a generational thing. Maybe it's just because Judy is sick and her priorities don't line up well with stuff acquisition. But our sons are of an even more distant generation and to them, the less stuff we have in the house the better it looks.

Sadly, one of the few things in life that Judy would have cherished for their memory were some special plates with a brown and gold family crest. Amazingly, her mum gave the lot away to Judy's cousin, her mum's sister's kid. Judy and her mum weren't talking at the time.

I had a conversation with a work colleague recently, which was poignant. Our legacy we leave behind is not a pile of cash, a bunch of furniture, a house, or even memories. It is the way that others lives are impacted by our own that is our legacy.

It is not just a shared memory or experience.

It is certainly not any thing.

The stuff of life is far better shared or even dispensed with along the way to potentially bring others joy and impact their lives in a positive way right now. That way it can be enjoyed collectively.

My dad and step mum extraordinaire Barb have been most generous with my family often times. Barb sums it up as they'd rather their successes were shared now, rather than later, because that way they can enjoy it with us. This impact that they leave on our lives is invaluable.

Judy and I find ourselves doing it with our sons, too. After all, life for us is all about our wonderful sons and the legacy that we leave them. And that won't be a bunch of stuff that they'll need to dispose of. They've plenty of time to gather that themselves.

Our close loved ones are everything, and next to them stuff is nothing. 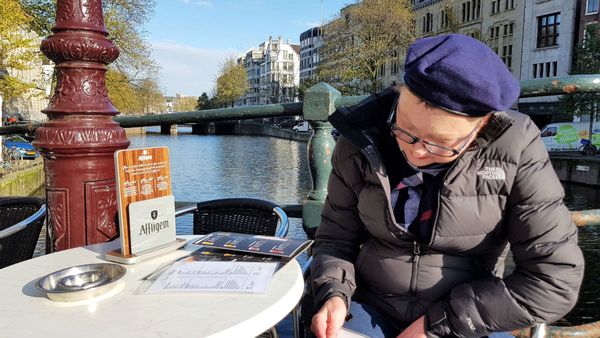 Usually life's ups and downs are not as absolutely terrifying and exhilarating as a roller coaster, but in every day we feel a somewhat similar rise and fall of life. This can be deeply personal and introverted, or outwardly and extrovertly shared.