Judy is back in hospital.

By now our cars can almost drive themselves the seven minute ride to and fro the hospital. It's not that far, but we seem to do it an awful lot. And being in close hospital proximity with cancer 2.0 is a really good thing too, especially as ours has 24x7 emergency facilities.

Serious health matters usually come as such a random thing. One minute you're living a (semi) normal life, then the next you've got your beautiful arse bared in a hospital gown being poked, prodded and methodically put back together.

Things can get real nasty, real quick in life.

None of us want to intentionally let things get out of hand. Looking back, maybe by being a little less stoic Judy may have been able to avoid this hospital visit getting so serious. She's such a trooper, and I do love that. It's difficult to say whether less stoicism would or could have changed anything. Probably not. But that retrospective glance back reminds me that the clues of this infection, like stabbing kidney pain (slight, but got progressively worse over some days) combined with increasingly burning wee need to be acted on sooner next time.

The likely cause of infection was probably a stent that was installed in one of her ureters to rescue kidney number one from imminent failure. These stents, which are nothing more than tubes to open up something that's blocked, tend to gather gunk, and need to periodically be swapped for a new one. Add the predisposition to gunk up with her cancer fighting drug Afinitor the Mighty, which tends to dent one's immune system, and there you have it: dining on hospital food.

She lit up a wee wee test for nasty bugs, and further testing later on also indicated that the infection had made its way to her blood too, so the net result is an indefinite stay.

After Judy's last infection Dr Rob advised she take a maintenance dose of antibiotics, which is a low, daily dose as a preventative measure. Unfortunately that supply ran out late last week, and it slipped her mind to ask Dr Rob whether she should continue it.

I guess she should have continued it.

Isn't it horribly amazing how quickly infections can take hold?

During the first night her temperature shot up to 39.9 at one stage putting both the ward nurses and our Dr Rob later quite on edge. Then the next day, despite her temperature being back under control she had periods of feeling extreme cold and shivering, high blood pressure and a resting heart rate of 130 BPM. Weird. And frightening.

I'm feeling on edge. Feeling all at sea. I know she's in good hands, and that's a comfort, but as irrational as it is, I already miss her like she's been away for a month.

I'll support her as best I can, in any way that I can. Even if that just means making sure she has everything that she needs.

"Could you please bring me some tracky daks? Princess Pissy Pants strikes again."

Going to and fro, today I reflected on how easy it is for me to dash home and get more undies, or if needed a set of favourite bed socks, or medicines that might have been forgotten. It got me thinking that plenty of those in this cohort, those who are managing cancer as a chronic illness, don't have the luxury of that. As an example, it takes Mum an hour car trip to get from front door to front desk of her hospital, and for others in this big brown land that is Australia an awful lot longer.

Well, I'm off to happily deliver some much needed support and undies.

Hopefully we can bust her out in time for the little baby Jesus' birthday celebrations. 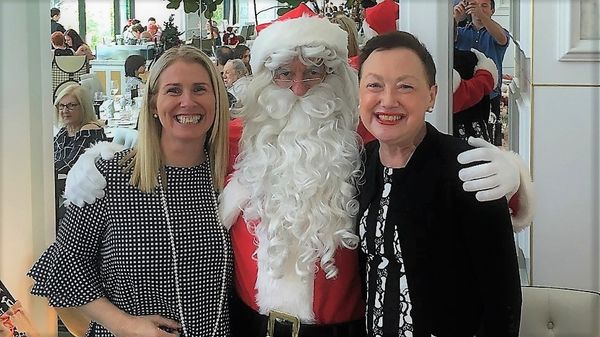 A nasty infection resulted in five days of intravenous antibiotics in hospital, regular pricking and testing, and putting up with the incessant wailing of an horrendous woman in the bed next door.