The symbol of a ribbon is an internationally recognised tool to raise social awareness.

These ribbons seem to be employed for almost every situation or cause these days, with different colours adopted. They cover military matters, political matters, and health matters.

Pink seems the obvious colour choice because that strikes me as the universal cliché colour associated with women, at least it is where I live. When I think about it, pink is a happy and vibrant colour, but breast cancer is anything but.

Buying, wearing or displaying a pink ribbon is associated with hope and care. It represents fear, hope for the future, and the support and goodness of people to be charitable and publicly support those affected by breast cancer.

Originally the pink ribbon was peach in colour, and the symbolism was conceived by a lady with breast cancer, Charlotte Hayley. She intended it to raise awareness of the minuscule proportion of the United States National Cancer Institute budget that was directed towards cancer prevention. At that time, just 5% of their rather large budget went towards prevention. So the symbolism was kind of about breast cancer, but really about cancer more broadly and fixing it before it happens.

The concept was apparently morphed into pink when a magazine approached her about further developing the idea and symbolism alongside her. Charlotte wasn't interested in their proposal, considering it too commercial. So now not being able to use peach, the magazine hijacked and modified the concept, recoloured and commercialised without her.

Like Charlotte's rejection, there is a strong element of rejection of the pink ribbon more broadly.

It seems counter-intuitive, but it comes from many breast cancer sufferers themselves, and the rejection seems to get stronger as the stage or progression of the disease worsens, particularly with the advanced: those living with metastatic breast cancer.

When you consider the original intent was boosting funding for cancer prevention it would make sense. For the stage fours that's too little, too late. But I think it is really the commercialisation and misdirection of awareness aspects to blame.

The hows and whys and wheres of the nature and treatment of cancers can vary wildly in different people. Judy and I only have to go on what she's experiencing, plus what we read. What has applied for us has been experienced by many, though.

She had early stage one breast cancer all those years ago, beaten into submission by surgery, chemotherapy and radiotherapy, and then the sleeping dragon awoke with a vengeance many years later and manifested as stage four. God only knows why. The oncologists certainly don't. Dr Rob shared that they think it might hole up in stem cells, undetectable until it decides to one day wake up.

It's a bit more complicated, but simplistically cancer stages are a description of progression. I've touched on that before in this blog in "Useless statistics". For breast cancer, stage zero is a benign growth, which can change later into a malignancy, I believe through mutation. Stage one is early, and invasive but localised, stage two is either larger, or spread nearby to the lymphatic system, stage three is a nastier form of stage two with more lymphatic system involved, or chest wall and skin, and stage four it's out and proud, spread to other or multiple and distant sites from the original like lungs, distant lymph nodes, skin, bones, liver, or brain.

I find it somewhat odd that the description of cancer stages (like one that can be found at breastcancer.org) are quite specific about the ins and outs and specifications of the cancer for stages one through three, yet stage four, the one that is most advanced only gets a few paragraphs. At least they don't say "Stage four: you're fucked."

But that's where those with an aversion to the pink ribbon are coming from. A lot of funding and focus seems heavily skewed to early stage cancer awareness and support programs, and to supporting the organisations that run them. Not to supporting research, and especially not heavily supporting research into metastatic, or spread breast cancer. That focus and funding is left to the drug companies, and a very small set of others offering research grants.

Life is by no means in the pink at stage four. It is highly likely that things will not go the way of a brief outpouring of sympathy from friends, some surgery and choice drugs from a doctor, visit a wellness centre a few times, then home free and you're all healed in due order to get on with life again. Well, maybe after a boob reconstruction. With stage four that never happens.

As a rule, stage four breast cancer never goes away. You're never home free (though we hang on for a miracle drug here on Map59).

Stage four cancers are rarely surgically removed, because they seem to pop up in many hard to reach places, like your spine or brain, or all over your liver, and rather they are beaten back into submission, and kept at bay for as long as your oncologist has drugs and radiation that keep working to do so. Surgery is an extreme resort.

"I celebrate every time I get a new frequent chemo card (from the hospital, every three months). Means I'm still here."
- Judy

If you were after a rather famous example of someone who is likely stage-four-fucked, and will probably change her focus quick smart about where awareness, funding and fund raising needs to be directed, look no further than Olivia Newton-John.

Both Judy and I love "Livvie", and were rooting for her every step of the way when she was diagnosed with early breast cancer in 1992 at the age of 43. She underwent a partial mastectomy, chemotherapy and breast reconstruction. She has been such a great campaigner for awareness of all things breast cancer, including many pink ribbon events, raising bags of money for support and awareness, and good on her for that.

Sadly, Olivia Newton-John last year in May got an "upgrade" to a stage four cancer way of life. It's in her spine, and last I heard the poor thing is quite immobile because of it. She resorts to medical marijuana to cope.

She declared late last year that "I'm not going to be one of those statistics". While I applaud her hatred of statistics, sorry Livvie, you need to realise that you're likely fucked, sooner or later without a lot of money and a miracle. Pink ribbon or not. Generously donated Olivia Newton-John Wellness Centre in our home town or not.

"She may be channeling light and optimism, but unfortunately cancer doesn't give a rat's patootie about that."
- Kaia Heide, a People Magazine reader living with metastatic breast cancer that Judy and I don't know

I hope Livvie lives long enough to direct her awesome light, optimism and influence as a lobbyist towards metastatic research awareness, and boosting focus on the Olivia Newton-John Cancer Research Institute, which opened a few years back. I think it a twist of irony for that research institute to be so named just a couple of years before she knew she was in a stage four situation.

Judy has had a personal brush with stage four meets pink ribbon wellness. An organisation that provides a friendly ear for cancer patients was asked to call her by a friend. They did call, but left a message. Judy called back and left a similar message. And that was that. Nothing further.

I would have expected something a little more for a stage four, but apparently no. Judy wasn't that surprised, as she had heard from those in her "MBC" community that experiences with stage four and the "fluffy pink support brigade" are like oil and water mixing. It would appear that stage four seems to be considered beyond even their hope.

If the people who will die from this disease in the years ahead knew that an estimated 2-5% of breast cancer research funding in the U.S.[1] goes to metastatic breast cancer research they would be horrified. I know I am. It seems incomprehensible. (40,000 a year die in the US, and 3,000 a year die here in Australia.) They would be further horrified that the remaining 95-98% massive bulk of the funding goes to something that these days is not actually going to kill you. That money mostly goes to far earlier breast cancer matters.

Stage four is a brand of breast cancer progression that is not considered survivable, and will almost certainly kill you. And for most, sadly that will happen eighteen to twenty four months after diagnosis.

Does the use of the pink ribbon symbol even result in any money being raised for research? I found it very hard to find examples.

Each year for three weeks you can buy a pink bun at Bakers Delight only to have the money go to raising more pink awareness and a bunch of (as Judy described it to me) "la-la-la-la-la" pink let's all feel good programmes, or pink let's detect it early programmes run by the Breast Cancer Network of Australia. Don't misunderstand me, their organisation is fantastic (as are Bakers Delight buns). But none of that pink carry-on money makes it to research into actually fixing much.

There is no denying that the symbolism of that simple pink ribbon has done an incredible amount in raising awareness and focus on breast cancer. But given where the money goes, and the things it is used for, I whole heartedly accept the rejection of the pink ribbon in the context of a metastatic plight. I'm similar to Charlotte in that regard. I consider it too commercial, and misdirected away from research.

It seems crazy to reject it altogether, though, because stage four is almost never a spontaneous thing, and does begin in a way that can be halted for many, at least for a while. Take Olivia Newton-John, who saw a similar cancer free period to Judy. Plus research into avoiding cancer in the first place, like the bloody brilliant Australian developed vaccine preventing cervical cancer. If awareness and more importantly funding from that awareness can stop those at stages one, two and three from getting to stage four, or even starting in the first place then it's got to be a good thing.

But back to research funding, pink wellness awareness things did little to cause these two lovely ladies a cancer free period. That was good old surgery, oncology and radiology.

At the moment we as humans sadly almost seem to have our heads buried in pink sand regarding the likely ultimate future for many sufferers.

Symbolism and awareness doesn't necessarily drive funding and ultimate solutions. At best, for some it might help catch the bastard early, and reinforce that caught early that it can be treated well.

I just wish there was a heck of a lot more focus, awareness and funding for those like Judy and Livvie that are fucked without funding miracles that in turn drive science miracles.

God knows, we need some kind of miracle.

So what could you do? Swinging a few bucks to the Garvan Institute would be a bloody good cause. They don't bombard your inbox. They don't send you fluffy pink coasters. They just spend your money on research towards fixing this shit. There are others, but these folks were favoured and fixated on by Samuel Johnson of Love Your Sister fame, who you may recall was nominated for Australian of the year this year. 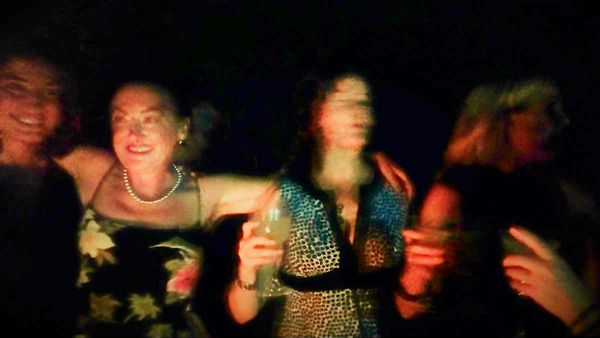 Of Judy's connections, in the month or so just gone, some beautiful people have fallen foul of their disease. Mixed emotions ensue.