While lying in hospital, I think I was living out the much loved quirky carol "The twelve days of Christmas". With each passing day, an ever more grand gift.

My gifts were definitely grander, but not in a good way.

Five days in hospital sharing a room (it felt like a cell) with a crazy Polish lady, and at too many times the twenty members of her closest and loudest family.

Ilena babbled and yelled endlessly, even as she slept. She demanded endless attention from the nurses and everyone around her, which was particularly so when nurses were taking my "obs" and pressing lots of buttons on that machine you are hooked up to that goes beep, beep, beep a lot.

It was attention seeking I am sure.

She would then not just yell loudly for them, but repeatedly bang her fist on the table. I was terrified they would be so distracted by her carrying on they would press the wrong button on my beep beep machine.

I mostly just saw the nurses when they came to vent that she was the rudest, and most offensive patient they had ever dealt with.

The pathology nurse was incredulous. "I have just spent two minutes with her and I want to kill her." When I replied I had shared five days with her, she tenderly stroked my hand and wished me the very best of luck.

At one stage, her husband came to tell me: "She's sick", as if expressing it made up for her being the way she was. Me: (in my head to him) "Do you think I'm fucking Louis Theroux? Just here to do a documentary on life as a hospital patient with a crazy person?" Perhaps he thought the I.V. drip, hospital gown and matching complexion of Casper the friendly ghost were just for effect.

Ilena suddenly developed a predilection for getting out of bed and falling down, if random yelling were not enough.

I was watching telly when nurse Erica asks "Watch her for me. I'm really busy."

Really? Oh, uh I'm a bit sick, did you read my file? She must have missed the memo.

In spite of the smile on my face I have stage IV cancer, had a raging E.coli infection as sepsis (particularly fatal in cancer patients), and rigors fever. My temperature spiked at 39.9, then later I was freezing, shaking and shivering uncontrollably, colder than someone lying in the snow at Mount Buller wearing only their birthday suit.

Plus I was so breathless they thought I had a blood clot in my lungs, but thankfully it turned out to be an over generous supply of I.V. fluids that had run out of room and found a home in my lungs. (Diuretic tablets will deal with the extra 9 kg of fluid I took home with me.)

I was hardly in a good way to watch anyone. Especially her.

The great escape from hospital on Christmas Day was special for many reasons but the greatest gift of Christmas was to walk away from my Polish friend Ilena. As I left, I could not even bring myself to spit "Wesołych Świąt". 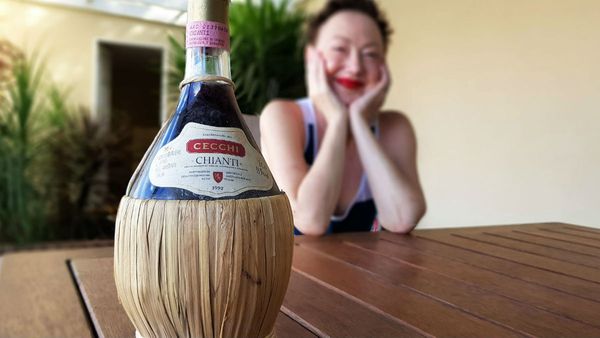 For most folks, knowing when to pull the cork, or these days unscrew the Stelvin on a fine wine is determined more by having some special event as a catalyst. We just forget about it until then.