How long should we let wine lie snoozing in its bottle before consumption?

If it's a lesser quality wine we're talking about then it really shouldn't be left that long. Instead of improving it will most likely become worse than it started out, so drink up.

Well made wines with the right characteristics will improve to a point, but at some point will start losing structure, or will even start going bad, especially if it is not stored well.

For most folks, knowing when to pull the cork, or these days unscrew the Stelvin on a fine wine is determined more by having some special event as a catalyst, and until that point we just forget it's even laid down waiting for us. We rummage around in our collection, and find something that has a few years on it that looks nice, or is a favourite, or that the bucks we paid for it matches the significance of the event (if we can even remember the price, which is unlikely especially after a glass or two).

And then we enjoy it.

It's not life-changing, though. For all the bloody long time involved in cellaring wine to age it, all the effort to control environment, and all the trepidation in some cases about how long is just right, the half an hour or so required to tuck it away with a smile seems to trivialise its sometimes epic journey.

We've got three sections in our cellar. There's the quaffing section for everyday use on the right, and the special section on the left with the better and older stuff. Then there is what seems to be the never-drink section, which contains things like wines carrying our twin sons' birth year, bottles of Grange Hermitage, a twenty six year old cheap Chianti mongrel, and wines with special labels where the label is more valuable to us than the liquid within ever could be.

The Chianti was dragged back from Italy by the scruff of its neck by Judy before we even hooked up, about a quarter century ago. It's funny that it's never been necked, as it probably shares more characteristics with vinegar than wine by now. But who would know? In my mind there is an unwritten prenuptial agreement protecting it, where being pre-relationship that particular wine was never "ours" for me to make a call on opening. Then with the passage of time, and shoved out of the way, Judy forgot that it even existed.

Sometimes being forgetful turns into delight. A few years back, we realised we had forgotten about a 750ml bottle of Noble One that was in the back of our booze fridge. We know a little about aging red wines, but nothing about the white ones, so on this occasion we lucked in.

It turned out that we'd been rather forgetful in this instance, with it slipping our minds for a couple of decades, but this lapse turned into a bloody good thing.

This bottle had been involved in several house moves. It had been ignored. It had been near frozen, then heated in a back seat en route to its next adventure. It had survived fridge failures.

It had seen a lot, really.

It should have been traumatised.

This desert wine had been transformed by its arduous journey at the back of the fridge. It was much darker than it began, and syrupy and special. It strongly held all the characteristics of Noble One, but was like it had been concentrated. A bit like a cherry is to a glacé cherry, you know the two are the same, but they have become remarkably different with a bit of slow sugary processing.

Since Judy's cancer 2.0 arrived I've found myself at times being less forgetful and dipping more frequently into the special section of the cellar without any need for a special event. The motivation is principally cancer reminding me to stop and smell some roses.

Or in this case it's less roses and more the fine bouquet of a big ball tearing bastard of an old Shiraz.

Life is too short for bad wine, and when it's reinforced that life might be even shorter then I guess the definition of bad wine also needs to get a revision.

I must be learning from the best. My dad, God love him, turned up one night at our local Italian restaurant with a BYO bottle of Penfolds Grange. It was a night to be celebrated for sure, but I seriously doubt that any Grange had ever before been downed in conjunction with nonna's (superb) veal scallopini with chips and salad.

Tonight, I slipped in to the never-drink section, for no other reason than because cancer. I hate that it has taken this shitty life event for the wine to scream: "Enough! Enough time, already! Bloody drink me."

Now the gloves are off. The never-drink section may get a far more often outing.

I might even pluck up the courage to beg permission and neck that mongrel Chianti to see what happened.

(Special thanks to Sarah Frances for the inspiration.) 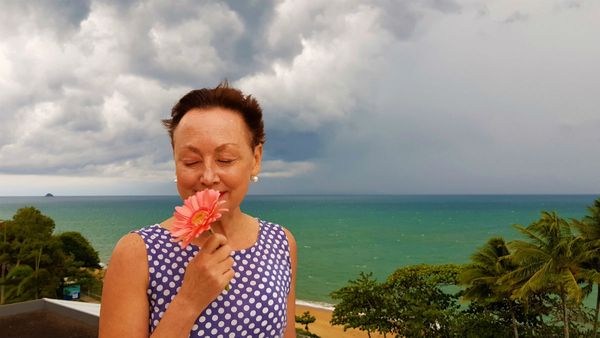 Most women baulk at the "gyno" experience, with some skipping the indignity altogether until they have to. But go on, ladies. Get a Nike up ya. Just do it.