Over the past few months, Judy's cancer has been gaining back a foothold, and showing signs of being increasingly out of control.

Fire fighters rarely refer to what they do with large fires as extinguishing them. Small fires are put out or extinguished, but large fires always seem to be being controlled instead.

The first priority with fighting a fire is to avoid loss of life. Secondary is avoiding loss of property. Last of all on the priority list seems to actually be extinguishing it, which makes a lot of sense given fire in itself is no big deal unless it threatens to consume something we don't want consumed.

I think oncologists are very much like fire fighters.

Metastasized cancers seem to me to mimic large fires in many ways. Left unchecked, cancers grow and spread, rending parts of our bodies in the process. Spot fires can also pop up either in critical places that need urgent attention, or that cause pain and are attended to in order to improve quality of life. And external influences, like the state of our immune system, can fan the growth or inhibit treatment.

To fight their fires, oncologists have at their disposal an array of therapy options to suit many different cancers, and also to suit the extent to which a cancer has spread. Surgery is one option, used to remove a cancerous tumor so it does not grow further or spread elsewhere. Radiotherapy is another. Some cancers, like the type Judy has respond to hormone therapies, and these are used to limit growth in a way similar to starving a fire of oxygen which will reduce its intensity or possibly even put it out. Many cancers respond well to chemotherapy drugs, which cleverly poison fast growing cells (like cancers) more so than they do other cells in the body (which incidentally is why many chemotherapy drugs cause hair loss, as hair is relatively fast growing). Other emerging options use the body's immune system, either by re-programming it, or hyper stimulating it. With all these options there are many types of each.

Which options are used depends very much on an individual circumstance. There is no single approach, or a typical and standard treatment plan, rather there is constant fine tuning of intervention to balance the cost of using a given treatment with the positive return from using it, plus whether an issue is localised or widespread, body or brain, and also the time it takes to realise a positive return.

Cost of a treatment seems to me to be measured in many ways, including impact on wellbeing and sometimes money matters (but quite honestly that is no barrier), but also less obvious factors like whether it is a treatment that will remain working over a long or short time span, or whether it is expected to act quickly or slowly, or whether the risk of serious side effects like stroke or heart failure is high.

A positive return from a treatment is measured by doctors by reducing the size or impact of a cancer, and also by the rate of which it causes the impact.

Judy and I measure effectiveness as having more time.

For Judy, the effectiveness of a hormone therapy, Tamoxifen lasted a disappointingly short five months, so another option to keep controlling growth and spread was needed. A second hormone therapy called Femara (letrozole) was selected by Dr Rob, which aside from lowering estrogen levels in an effort to control breast cancers, is surprisingly also used as an effective fertility treatment for women with ovulation problems.

Trying a new option is a tense time. You need to wait to see if it will be effective, and that waiting is usually measured in months. With Judy, we approached every blood test and scan result with hope and trepidation (a state of mind that a friend described as 'scanxiety'), wishing that a good result would be seen. But after a couple of months Femara was basically a bust, and things were still going the wrong way.

At this stage, Dr Rob strongly suggested a more dramatic and certain course of action, which was to revisit chemotherapy with Doxorubicin. After all, it had been highly effective last time, and we had not yet reached the maximum safe usage of that option.

I've said it before, but when oncologists smile the whole world sighs with relief... After many months of furrowed brow, the first few sessions of that return to chemotherapy saw Dr Rob again relaxed and comfortable, as clearly his fire fighting efforts were being rewarded.

Surprising to us, and many others, this time round Judy really didn't lose that much hair. Rob offered that the reason may be that her hair is fine and was quite short already, so maybe gravity couldn't drag it off her head. Whatever the reason, she was most pleased to treat every strand as a hostage. At the time I recall being anxious that the reason for little hair loss may be because the chemotherapy wasn't being effective in killing off rapidly growing cancer cells, after all, with Tamoxifen the reduction in effectiveness was heralded by a reduction of symptoms that told us it had been working, like hot flushes and nausea.

Thankfully it has worked to shrink the cancer down, and very well, with significantly reducing tumor markers just like before. So feel smug about your hair, Jude. 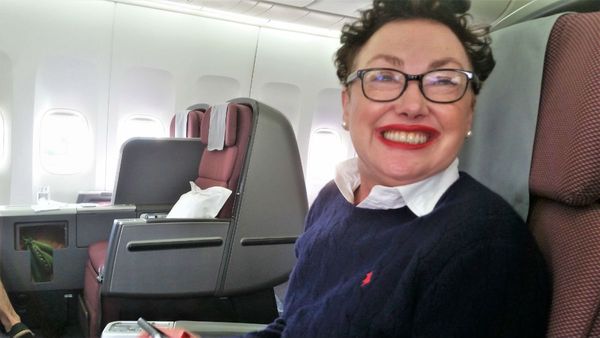 Judy is quite fortunate right now. She looks great. I think it obvious, and only right that Judy looks so well most of the time, as the disease is hidden inside. There are some downsides, though.