Humans are hard wired for life stages. Stage one, become a baby as a result of sexy-sexy time and yell a lot because you can't talk.

Stage two, be a kid, still yell and scream a lot plus feel awkward a lot. Next, be an adolescent and want to feel a lot of the target desired sex. A lot of the time. Then become an adult and have sexy-sexy time and make babies. Possibly. Possibly a lot. And so on it goes.

And then later stages arrive with the kids all grown up, and you just expect plain sailing, lots of travel and freedom from birth control.

When we were young, carefree, and cancer free, Jude and I used to root like rabbits when afforded any accommodating circumstance that would allow it, or that we could engineer to allow it. Heck, even her early breast cancer only slowed us up a little, for a time.

Princess Mighty Fruitful fell pregnant with the twins just two months after we got hitched. Many folks can accurately trace it back to a specific boozy event, or a concerted effort, but we had absolutely no idea exactly when, given we couldn't keep our hands off each other. We definitely ran out of of fingers counting up the possibilities.

Now we're older (OK, a lot older, but not really that old), and have a bit more to deal with (OK, metastatic breast cancer is truly a shit sandwich), so we're more accepting of circumstance getting in the way of a good wrestle.

But we never let infrequency or circumstance get in the way of us being a loved-up matched pair. Ever.

Being loved up isn't all about sexy-time.

The things that ignite a spark in any given relationship, right at the start of becoming a couple is often times quite different.

Sure there is a lot of commonality in pairings. Things like introduction and opportunity, and feelings of attraction that are not dismissed and instead are acted upon, and being compatible in whatever or every way, and also that je ne sais quoi feeling when together. Plus there's almost always loads of sex to triple check that everything fits just right.

What keeps every successful couple together though, is so far removed from the initial sexy-sexy time attraction.

If you could look back at the start, and build a list of the shit stuff that you will do and experience together with your partner much later in your relationship, and tipped it in with the attraction, the je ne sais quoi and the bags of bumping, I wonder whether it would influence you.

If that list were an initial check list for getting that relationship going, I doubt you would become a couple for life in the first place.

Here's a start of ours:

For young ones, if that lot were dating criteria then one night stands would become the predominant form of continuation of the human species. Nightclubs, not churches would be where people go to pray, and whilst there also to hunt, prey and tarry. Tarry and parry with a partner for a short while, and then move on to the next nightclub.

The world would be full of quite the opposite of the sentiment voiced in Lear's poem, The Owl and The Pussycat: "O let us be married! Too long we have tarried!"

When young and fresh eyed we do get a glimpse of the future to be, with wedding vows of in sickness and in health, and all that ... but it's so far into the future that it is treated as an oft repeated cliché. "Yeah, sure, blah, blah, get to the kiss..."

So advance knowledge of all of the hard shit would in all likelihood weigh heavily on getting a relationship going.

But keep it going?

For Judy and I, absolutely. And not just keep it going, but all of the shit just pulls us even closer.

It could never break us.

Modern successful relationships focus on the original blended seed of the self-matched pair, and build that together. They focus on the "we, and ours, and our family". They forget everything else. Any shit shit is just shit to be overcome, and happy shit is there to be joyously embraced.

Relationships live and die by our ability to put aside any and all crap and distraction at its face value, and rather focus on the things that matter.

Great relationships are ones where the crap just makes you stronger.

Self-imposed monogamous pairings are a fairly recent characteristic of our society that we've arrived at in our human evolution. Sadly, humans are often terrible at it, and I suppose that makes sense given that not so long ago most humans lived in communities and shagged at will, not unlike my nightclub tarrying imagining earlier. The community helped each other with child rearing as a big extended family, though, and survived brilliantly as a larger whole. But these days, with "the community" of support shrinking to just immediate and close family, you'd think we'd be getting better at hooking up for good, but it would seem we're getting worse at it.

These days, it strikes me that a lot who are in relationship twosomes increasingly cut and run.

Some get sick of being with the same old person, and trade in for a younger model, which often turns to custard. Gold diggers exempt, I guess, where you'd put up with feeling any old thing for a buck.

Many genuinely do get it wrong, cut their emotional losses, and then end up finding the love of their life, building a much stronger loving family, and a much stronger legacy, and also embracing their losses of the past as eventual wins. And a massive "hats off" for doing so, I say.

Nothing in relationships seems to be set in stone, despite the structure of today's society, and with human resilience and adaptability being what it is, fair enough. In fact, I bear witness to my folks getting it wrong, then eventually getting it right. And I thank the Lord that my princess cut her losses with her prior nightmare to be with me today.

But the same won't be for us. We're forever.

So back to the hard wiring of living stages, cancer throws a massive fucking spanner in those works. Judy and I are at a life stage where we know we'll need to keep working forever to afford anything, as there's grand parenting to look forward to. Instead, we're throwing everything we can at keeping the absolute love of my life, my princess, my everything, kicking medical goals so we can even get to grandparent together.

Keeping us as us for as long as humanly possible will add to our legacy, but at our stage surely will not further procreation of the species. And our legacy won't just be some memories of the species. It will be the way that we have and will impact the lives of others.

And the impact will be most profoundly felt by our immediate family and their future families.

We have envisioned both of us relaxing on a balcony somewhere, watching our little community before us through our loving eyes, our future generations of progeny, loved up with others, playing and chatting blissfully while we hold old hands together. We think as one that our toil, our sacrifice, our togetherness, and our love will be to support this immense purpose. The lives that we have spawned and nurtured and impacted. And it's a vision that we yearn to fulfil.

Them hands aren't vaguely old yet.

Even if we don't grow old together though, our loved up impact on the world will remain.

Nothing can take that away. 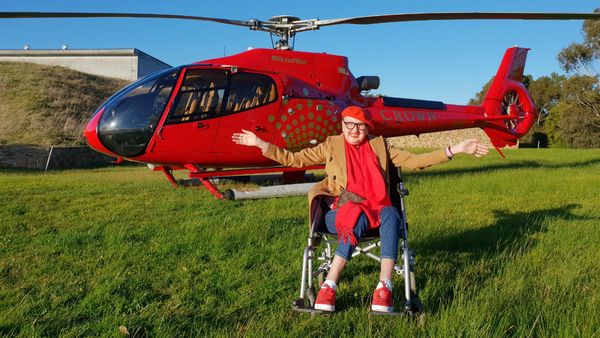 Getting from bed to couch with cancer can be a big win. But with us together, Judy can set her sights on goals much further afield, and do her best at turning the everyday with advanced cancer into something engaging, involving and special.