Lately I've been giving my princess Judy what I call stretch goals.

To call these particular goals that I gift her a "stretch" is quite a bit of a play on words, as they relate to eating a little bit extra, and chocking on weight. Ideally many kilograms of weight.

I'm keeping an active eye on Princess Picky Pants' nibbling. I'd be happy if she stretched a few more kilos, but frankly, I'd be elated if she achieved a more curvy Rubenesque. I don't think she really likes it when I fuss and worry too much, but I do so with the best intentions. Still, both of us are on board with getting her weight up.

Judy has been quite the Skinny Minnie lately, with one weigh in a few weeks back hitting around 45 kilos. Her normal weight sits around 55, or at times a little more.

For many folks just discovering they have cancer, losing a bunch of weight for no reason can be the first sign that something is even wrong. It used to be widely thought that cancer was a big consumer of calories, explaining why otherwise unexplained weight loss is seen, but new thinking is that there is a lot more going on. Though some still simply say that cancer is greedy, and indeed Judy and I were told just that by a palliative care nurse only a couple of weeks ago.

Over the years, a bunch of scientists have done a bunch of stuff with a bunch of rodents (and people) to try and work out why sufferers of various cancers seem to consistently, and a lot of times uncontrollably shed a bunch of weight.

What happens with those that shed the pounds is called anorexia.

This is not your anorexia nervosa, often shortened to be called "anorexia". That kind of anorexia is a psychological thing. With that condition, you're fat, however many bones are sticking out. You celebrate losing weight. You feel it is the only thing you can control in life, and that control consumes you. Another kilo gone: celebrate with a selfie "high five!" With it, you lie about eating, and then you celebrate with another selfie high fiver when those lies are successful and you can quietly get back to the business of slimming unimpeded. Anorexia nervosa is something that you intentionally do to yourself, and can't seem to stop doing without intervention of some kind.

Rather, the anorexia in this case is a decreased sensation of appetite because of cancer and its treatment. The result is similar to its nervosa form, but the cause of it is quite different, as is its potential for impact.

A bit of poking around in research papers reveals some really interesting and diverse analysis of what can mess with a cancer sufferer's weight. There are loads of possibilities that have been scrutinised by medical folk on the subject, however many of the papers produced as a result don't seem to arrive at any conclusive "a ha!" moments. Or maybe I'm just not smart enough to identify the "a ha's" amongst so many words and concepts that I don't understand.

Then again, I suppose this research doctoring business hardly ever would arrive at simple one-explanation-fits answers, given highly complex interactions and differences in disease that go on in our bodies, caused by both internal and external factors.

There's a lot potentially going on with cancer in this regard, and here's a short list.

On top of that, chemotherapy can alter taste, and make you feel tired and disinterested in eating.

And just when you think it couldn't possibly get any more fun, with advanced cancer, and a few other diseases there is a condition called cachexia, which when developed results in an out-of-control loss of weight. Being out of control, you can eat as many party pies, or doughnuts, or cans of Dairy Whip cream squirted direct from the can into your mouth and still lose weight. Cachexia messes with nutrient intake, resulting in starvation even if you eat well. A state of starvation means the body’s cells are being denied amino acids, carbohydrates, fats, proteins, and sugars needed for survival. To cope, your body uses healthy tissue as an energy source, and that doesn't end well.

The mechanisms behind this cachexia are an area of research that will hopefully come up with some effective treatments. To do that, researchers need to understand exactly what causes it. There aren't any effective treatments right now, and given the prevalence of it in advanced cancer sufferers and others, coming up with something quick smart would be ace.

Calling cancer a greedy guts is a far simpler explanation though, I guess.

So what's the net result with cancer anorexia and its cachexia cousin? Why so bad? When you lose a bunch of weight, and have all sorts messed up, tolerance of cancer fighting drugs is reduced, sometimes to the point that you can't be given them safely.

And we don't want that.

Thankfully this past week Judy's appetite has been getting better and better. In fact, she's slowly climbing towards 50 kilos, and just now hoovered down a massive club sandwich and a heap of shoestring fries like she'd not eaten for days. This was top notch stretching, as it came after we'd been well fed all day by airline lounge staff and aircrew on the outbound leg of our next big adventure travelling.

With stretch goals everywhere you look, our latest journey takes in northern Italy and southern France. Perfect destinations as these two countries have a lot of cheese and bread and pasta and wine always at hand. I just need to get lots of it into my little princess's hands, which given the generosity and sometimes insistence of a little more that we have encountered with folk in these countries is proving an easy task.

My hope is that the holiday delivers the nom de guerre for Judy of Princess Buddha Bum. A great deal of Buddha in reserve will serve Her Highness well. 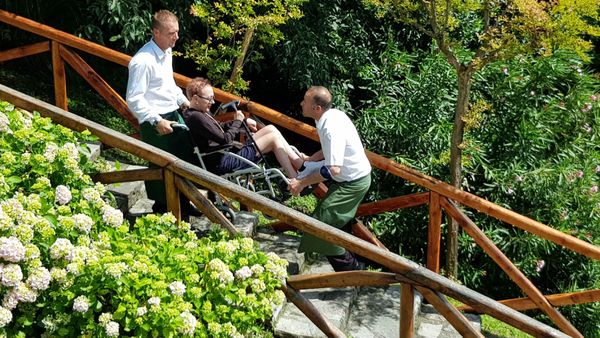 A big adventure begins at the Palazzo del Vice Re in the province of Como, Italy. Stairs and cobbles can't keep a good woman down.