Airline baggage allowances are such that you should be able to go away for a couple of weeks at a stretch and not need to do any clothes laundering. Well if you pack sensibly, that is.

So with two people, double the cases, and double the allowance. Easy, yes?

Then throw in a wheelchair.

The wheelchair itself doesn't dip into any baggage allowances, thankfully, as most of the airlines don't even weigh it, so it's not shaving anything off valuable kilograms that could be used to stuff in more socks and undies.

But what a wheelchair does do is to force the need to pack light, because you and your beautiful princess need to wheel her in the wheelchair, and haul the bags from taxi to check-in, grab bags off a carousel at the other end, and find the rental car in a sea of a car park. Most of the bag wrangling is unassisted, and you can't leave a bag unattended and ferry back-and-forth these days as a marooned bag would be stolen, or promptly blown up by police as a suspected bomb.

I think we did a pretty good job with logistics on our own. The two carry-on bags wheeled on four wheels each, so Judy clutched the two of them at her left together as one eight-wheeler, and rolled them beside the wheelchair, with handbag on lap. I'm of course pushing, and bringing up the rear is the large two wheeler case as a trailer, held by my right hand along with the wheelchair handle. God help anyone who got in our way. We were an unstoppable rolling force, and like a snow plough to people in the busy airport terminals.

Most of the space in Judy's carry-on was taken up by prescription and adjunctive medicines, and mine featured technology, duty free and free space for the pyjamas and amenity packs that would be gifted business class by the airline en route. (You have to keep these, don't you?) The checked suitcase carried both of our clothing bulk, with contingency for cool days along with warm, given it was early summer in the northern hemisphere.

That single checked case meant at some stage we'd need to get something washed, as travelling a long way for several weeks at a stretch you just can’t pack enough clothes in one bag for two to go the distance.

With Judy relatively immobile, before departure I did all the packing. Well OK, sure, a little direction may have been given at times, but I did it. Me.

Pack for a bloke. Pack for a chick. How hard can it be?

Hang on. Bloke packs for a chick? If you're thinking that's got "fuck up" written all over it, remember that anything can be profusely apologised for, and virtually everything can be purchased anywhere. Even so, there were tense moments packing, but as it turns out I did pretty well.

Except for anklet socks.

You absolutely have to have these with your white Gazelle runners to stay on trend. And your Gazelle shoes are absolutely essential when you're Princess Wobbly Legs. There can be no sock-less slides or thongs, as they're quite the trip-and-fall hazard.

At home, you can buy anklet socks in the supermarket. But in Lake Como? Local knowledge was clearly required to procure them, and so in just three bloody days it was time to do some washing.

The Province of Como is full of beautiful villages, many of which seem to be designated "fishing" villages. These people clearly do washing at home, or bash them on a rock at the lake, or drag them behind a boat or something, because almost all of them didn’t feature a laundromat.

Handy Google Maps located the nearest one for us (one of three in all of the villages), which was just 1.2 km away. But across the other side of the lake.

You'd think that was a problem at first thought. I did. But then handy Google again pointed out that you could jump in your car, and be across the lake at the nominated laundromat in just 40 minutes. God I love Google. And Italians with their ferries. In the olden days with paper maps and schedules we wouldn't have known where to begin.

So we jumped in the car, headed on down the road to Bellagio, rolled the B180 Merc onto a ferry and headed off on our next big adventure into a sudsy unknown.

My beautiful princess has been shedding hair profusely because of chemotherapy lately, so she wanted to trim the locks and minimise the collateral hair-in-mouth, nose, eyes and everywhere that happens. Google again to the rescue, with a hair coiffing joint to hand, just near the ferry terminal.

There was much hair washing (two times, the first vigorous one yielding hands full of falling-out hair, the second gentle one much less, so done), then much hair drying (roll, roll, roll with the brush, less hair, so done), and then the actual cutting started. Frankly it was amazing there was much left to trim after all that scrubbing and blowing. And at the end of it all, "Sì! Sì! Crazy Euro short cut", somewhat thinner than before.

Back at our lodging, Palazzo del Vice Re that evening, step-mum extraordinaire Barb agreed that washing was needed soon, and like so many things in life where "don't ask, don't get" applies, soon caused her washing to be done by the staff at the palazzo for her.

Ah, well. We had a grand adventure, even though it turned out we didn't need to.

Honestly though, I think Barb missed out. 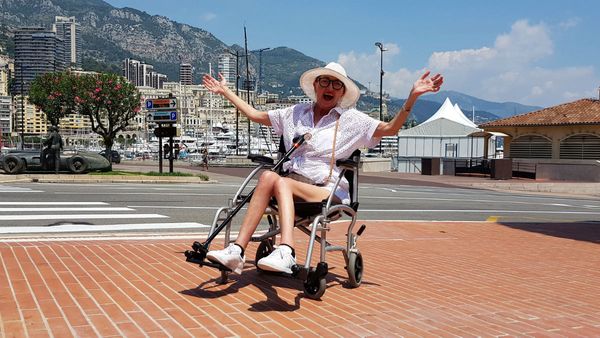 Originally our trip to Europe was going to span almost the entire month of June. Curtailed by cancer, we grabbed everything we could.