As a bloke in an inseparable couple I always hung out at functions attached to Judy, often literally, entertaining and being entertained as a couple. We were a single loved up unit.

If we were going to a 30th or 40th, or more recently a 50th birthday party, or just to a BBQ, we would be invited and go together, and then talk in groups together. The chit chat almost always involved catching up on the near term: the things that have happened since last contact, like recent holidays, or the people who were being a pain in the arse, or what the kids were up to, and that sort of thing. More recently, chatter sometimes involved how effective or not my princess's treatments were being, but mostly that was dispensed with quickly, allowing conversation to get back to fun stuff.

On reflection, Judy spoke a hell of a lot, and asked a hell of a lot of questions, and I mostly tried to keep up, and contribute where I had something of value, when I could get a worthwhile word in.

Some would disagree when I get wound up and rambling, and blathering about some topic or other with mates in the back yard, or as an I.T. sales guy when I get excited talking through how a customer's project can succeed, or when I'm talking shit about life while out for a wander somewhere with my bestie.

Still, I do consider myself quite a shy person.

Judy described herself to me once as the same (yeah, I'm calling bullshit, just like you all think she wasn't shy). Although, feelings of self-doubt I guess are human nature, which would be why I think of myself as shy, while all the while being able to talk a leg off a table at times.

When I am confident about what it is that I am saying, out the thoughts come. When I am truly comfortable with the person with whom I am conversing, out it comes. As a sales bloke, whether a room contains five or five hundred people that I am speaking to, most of whom I don't really know, or probably don't know at all...

And the large group of wonderful humans that are reached by my blog writing? It is published publicly on the Internet towards many people I hardly really know enough to declare that I am "comfortable" with, and also a swathe of folk that I don't even know at all ... and still, out it comes.

Maybe, like Jude, I'm not really as shy as my brain thinks I am.

Okay, let's describe me as being as shy (yeah, right) as Judy, yet being a vocally subdued audible sponge and sharp of written tongue.

Over many years, of Judy's mates, a lot of those friendships had been formed early in her flying career, well before she and I were an item. And she continued over time to attract many more friends that she was in regular contact with. Over-the-time inclusions featured one school for the kids right through prep to year twelve, and four careers, including secretarial work, flight attending, real estate and then policing.

As a guide, over five hundred wonderful human beings attended her funeral service in person, plus there were more than a thousand views of the Internet live stream I had arranged. Fuck, I'd be lucky to entertain more than a hundred at mine, being substantially less bubbly of personality.

For most people, most of our friendships get formed in our working lives, which stands to reason given we spend most of our lives working. So for me, most of Judy's friends were my acquaintances because she worked with them, save a small swathe of close friends in common and school mums and dads.

I'm across a fair few of these acquaintance's current lives, helped by social media, as up-close personal memory does vary according to alcohol consumption on party nights. I have rarely had opportunity to get to know these friends one on one. They were mostly Jude's friends after all, with me foisted upon them as a "plus one", so fair enough.

Entering a relationship you don't get handed a dossier covering all of your partner's friends and their background, nor are you privy to day-to-day conversations (unless you're an American CIA agent, who I expect would be filled in on both counts). For example, little tid-bits like that someone was separated I just accepted when presented with the fact, but had no idea why they were separated, or even from whom they had been separated. Judy had already well and truly workshopped that with them in the back galley of an aircraft at the time, or on patrol in the divvy van, or more recently as a personal exchange on Facebook messenger, then both had moved on after she delivered some sage advice like "He's an arsehole. You deserve better. Let's go get a latte."

And now I find myself alone when out and about.

Sometimes the prospect has been daunting. There are feelings of self-doubt. Feelings of being scared of taking on the prime role, with Judy's absence a huge set of chit chat boots to fill, with no red lips for me to hide behind. I am constantly reminding myself to be confident, to always listen, because that's important, and also to find my voice.

Increasingly, I am smiling inwardly more broadly at it all, brushing off the daunt. Thoughts of doubting myself are quickly set aside to reveal heart warming experiences with some pretty fucking wonderful humans, most of whom I already "know".

This chit chat two ways means getting to really know friends, or for me, it is acquaintances becoming close friends.

A great case in point is Andy, firmly considered my best friend in the whole wide world right now. Her wonderful way of surrounding those in need with love and care and respect and admiration and contact were like a flame to the drifting moth that was me when the world was turning to medical custard. Through it all, with a great dose of chitting and chatting transpiring, we just "clicked", and a wonderful friendship has blossomed.

Sure, I'd been out to the races in the past with Judy, Andy and her bloke, and had bumped into each other while mutually holidaying in far North Queensland, but she was Judy's mate from way-back flying with Ansett airlines. Great chick, but I didn't really know her at all well before.

Now I'm sure Andy, her bloke Mark, and even her kids consider me a mate.

A lot of Judy's friends were of course connected with her on social media, and many of these were a re-connection after the collapse of Ansett airlines. Back in her flying days Facebook wasn't even a thing, so it saw many years elapse before an extended family of ex-Ansett could be put back together by social networking. Over time, quite a few of these have also been added to my "friend" list, some being close friends, but most of whom, unlike Jude did, I consider acquaintances.

In writing about our experience with Judy's metastatic breast cancer in these blog posts, I always published them publicly, and posted a link to social media, tagging Judy in them to reach all her friends. This was a brilliant way of keeping everybody up to date.

But I think it was also a great way of letting people into our lives. Letting them see the real Judy and Steve. Loving and strong, yet fragile and emotional soul mates, who were grounded yet at the same time somehow lost in a sea of circumstance.

At the most recent Ansett unofficial reunion that I delivered a wheelchair-bound Judy to, I lost count of the number of times that I heard the words: "You probably don't know me, but I feel like you're my buddy. I love you." While feeling lost, it also made me feel grounded at the same time, and left me feeling surrounded by a family of friends that I didn't comprehend were there before for me.

And it's still happening. I'm getting to know acquaintances on aircraft. While flying Qantas business class back from a tropical paradise, I encountered the lovely Evelyn working the sector, and talked shit at length with her, and received a huge hug when getting off (to the great amusement of the captain). In days past, Judy would have been the one talking most of the shit and getting the hug, and I would occupy the seat beside, smiling and listening.

Still, I did more than know Judy, and I am very much human. That's more than enough in common, it would seem.

It's been delightful getting to know so many people that I already know. 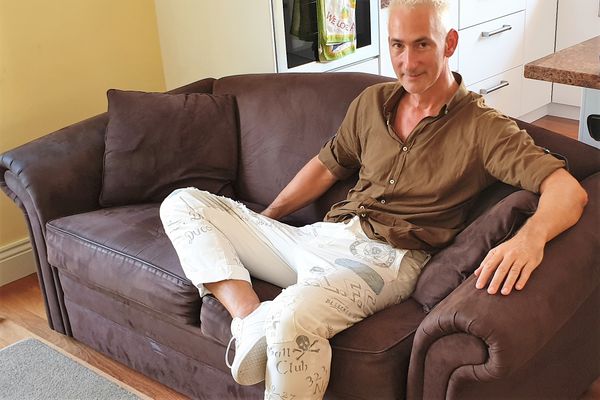 Shortly after Judy died, one of our first jobs was to pick an outfit for her to wear forever. A tale of matching jackets and freaky pants followed.