Shortly after Judy died, one of our first jobs was to pick an outfit for her to wear forever.

The ensemble rapidly and naturally came together. It didn't need serious thinking, because Alastair, Seb and I knew exactly what she would have chosen, were she able to do the job herself. A Ralph Lauren jacket, red/white striped Ralph Lauren shirt, Saba pants and red Adidas Gazelle shoes, with white anklet socks, of course. It was topped with her blue Trilby hat to keep her bald noggin' warm.

It was a no-brainer.

The jacket had been hunted up in May 2017 at a Ralph Lauren store in Tsim Sha Shui, Hong Kong, at great expense (which I didn't give a fuck about, but Jude couldn't get her head around spending that much on just one item of clothing). It resulted in her eyes glistening and her body shaking with excitement because she had wanted one like it for years. She liked a good label, but rarely owned designer delights for real, preferring to buy half a wardrobe of knock-offs, most of which had also come out of Hong Kong or neighbouring Shenzhen, for the same money as a single jacket.

The delight in her eyes that night pouring over the day's purchases in the suite at the hotel was just brilliant, and I'll carry that memory of excitement forever. Just one purchase among dozens for the day was hugged, and hugged, and hugged, as if it might run off, or vanish if she put it down.

It was therefore also a no-brainer that I headed in to the Ralph Lauren shop in the city to deck myself out for an outfit to wear at her funeral.

Sombrely I shopped, with more than a few tears shed whilst picking through Chinos and shirts and ties. The wonderful staff found me a fabulous jacket that would compliment Jude's outfit of repose (and gave me many needed hugs, too). The right jacket in the right size was in Sydney, and I was in Melbourne, but my serving fitter assured me it would be express freighted down in time.

While outfit hunting, I spotted a pair of pants that drew my eye. They were totally fucking crazy pants, and certainly not appropriate as funeral attire. They were white three-quarter length jeans, they had ripped bits, they had coloured patches, they had stuff written all over them, a skull and crossbones, and attitude, and they were totally unlike anything I would normally wear. Yet, still the pants dared: "Go on, buy me."

I had them in mind for months, and decided that they could be a reward for finally and solidly hitting a target 32 inch waist; a treat for losing my bloke tits, and the associated pudding. That deserved a bit of "attitude", I thought. Owning them would also be incentive not to put the bloody weight back on, too.

Tits shrank, as did the guts.

I spotted the pants again while walking past that shop, on the way for lunch with my mate Dave at a Shuji Sushi for a shared tradition of a bucket of Teppan fried rice. They were calling me, beckoning me through the glass windows, and pushing me on to lose the boobs. I heard them loud and clear and doubled down on boob loss after that lunch, which I didn't finish, as consumption of too much of that kind of shit in years past had got me pudgy in the first place.

I also knew that designer stores change what they sell all the time, so there was no time to waste.

Most recently, I was in that same Ralph Lauren store buying a shirt that I'd also had my eye on for a friend, Caroline for her birthday. It is a great looking shirt, kind of like a pink-shaded Burberry crossed with Polo Ralph Lauren, and a figure hugging tailored-look. It instantly reminded me of her, so I think it's just perfect for her. I hope she loves it.

Shirt present hunted in a hopefully guessed-right size, I wandered/fawned around the shop, and was compelled to fawn over the crazy pants, yet again, being just a kilogram away from my goal. There were only two hanging on the rack: a size 40 and a 32 inch. Mr shop-keep saw my fawning, and commented with a wink and a pout: "Yeah, they're the last two. Great pants. Love them. Oooh, you might be a size 30..." (love you, bloke) "Why don't you try the 32s on, and I'll go see if there are any more hiding out back?" So he sashayed off calling over his shoulder, "Trying is free, yeah? So you might as well..."

I tried. They fit like a loose glove, but they fit. When Mr pouting returned, there were absolutely no more of them out back, so this was possibly the last size 32 on the planet. "Okay. Sold. Wrap 'em up.", I heard coming out of my mouth. What was the price tag? I had no idea. (If you need to look, you shouldn't be shopping there...)

I proudly wore the pants for the first time to Caroline's birthday lunch, along with a Zara top I had impulsively bought a while back that had no logical outfit pairing until now. I felt bloody great. It was like a completion of sorts. Not just of losing the boobs and smashing past a 32 inch waist, but it felt more than that. I was relaxed. I had a great day out.

I honestly hope Caroline likes her present. She seemed to like it.

The more I wear, and look at, and research these fancy pants I've bought, the more I am fucking blown away (research required because there's Latin all over them). They and I were meant to be, right from the day I had shopped for a eulogy outfit. So thank you, Ralph Lauren? Nah. Thank you Jude. I reckon it was she who was somehow urging me, not the pants.

For example, in Latin on the lower leg is emblazoned: "Humilitas occidit superbiam". As your Latin is probably as rusty as mine, I looked it up and it means "Humility conquers pride". That phrase absolutely captures Jude. It is also a phrase that was most notably referred to in a 14th century painting by Caravaggio depicting a biblical scene of David's slaying of Goliath. Jude tried to slay cancer, giving it a red hot go with Dr Rob, but it is her humility in the face of a monumental shit fight that is a model for me to try and humbly follow.

Let's hope our donations to Samuel and Connie Johnson's Love Your Sister charity go on to help one day slay a medical Goliath through cancer research. Your donations will undoubtedly help, too, so thank you.

There is also an affirmation on the back of one of the pant legs in English, which I didn't even see in the store: "Our greatest glory is not in never falling but in rising every time we fall."

I will arise, having fallen, my love. Thank you.

And more Latin: "Vivere militare est" ... "To live is to fight", which struck a particular chord, too.

And "Esse quam videri", a phrase of amazingly oft-used Latin embraced by many organisations as a motto, meaning "To be, rather than to seem". Jude was always a wonderfully genuine person, who was who she was; there was nothing fake, and she was always unpretentiously grounded in reality and not afraid to show it. Again, a role model for me.

At first these were just some alluring designer pants with out-there styling, the likes of which have never adorned my body. A folly. I had no idea where the allure came from, but it was super strong, and compelled me. I didn't just want them, I needed them for some reason.

So I proudly wear an inner smile with every wear of those fancy pants. Thank you, my soul mate. It wasn't serendipitous. I am sure you led me to them, and I love your messages of strength. 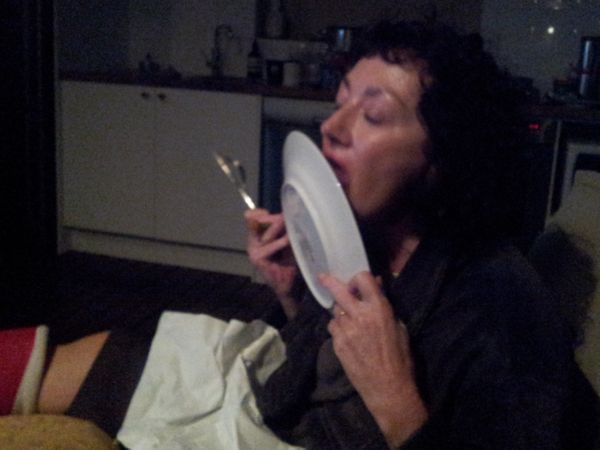 It has been precisely six months today since Judy left us. I miss her daily pearls of knowledge, and wisdom, and remembering, her laughter, and zest for life, her positivity, and optimism, always looking to the future. And I also miss her risotto.