The Internet is full of cat images, videos, memes and stories, so I thought I'd throw in our cat experience too. Apropos of Judy's Cancer 2.0 journey, of course.

What a cat our Matey was. He's gone now, but he'll always stay in our hearts.

He was so gorgeous.

And oh, such a little prick at times.

Early in our relationship, The Simpsons was a prominent and infectious cult TV phenomenon that had already been running for years. It's still going. Way back then, there was an episode titled "Bart of Darkness". It was classic Simpsons. Hilarious. If you're a fan, you'd probably remember the parody of the cinema classic Rear Window in that episode, with Bart Simpson in a leg cast and wheelchair confining himself to his bedroom with binoculars and witnessing Ned Flanders "kill" his wife. In that episode was this dialogue:

Their dad, Homer Simpson capitulated quickly and agreed to install a pool.

Judy is a dog person, and I am a cat person. It happens. This is not a big deal in our relationship, but needless to say, cat capitulation was not going to be quick.

The whole dog/cat leaning in a relationship is sometimes awkward, but it's never really bad. It's totally unlike facist/communist leaning. With that, I imagine relationship circumstances where one morning the communist, after a heated political discussion the night before about Donald Fucking Trump could wake up to his or her tires slashed in the carport, or Vegemite planted in their toothbrush tube, or hate mail left on the fridge. Dog v Cat is totally unlike that, but it is a point of difference.

It is far less of a point of difference as we learned from Matey.

For Judy, there have been many dog relationships throughout her life, either adopted by her or her parents. There was Sherry, who was with Judy from infancy through adolescence. Then Spencer and Barwick. Her penultimate pet relationship, Waldorf, was a beautiful and gentle Golden Retriever. Cats were considered food.

For me, there was one dog, a few fish, a budgie and quite a few cats. The one dog was Sally, an Alsatian, who was a real scaredy-cat. The budgie was lucky to survive as long as it did, as I embarrassingly remember one time padlocking the cage shut and swallowing the key. The fish seemed to eat each other all the time. But the cats were special.

The first cat in my life was Pepi, a moggie. I don't remember much about her as I was quite young, but I do remember her at one stage pissing in one of dad's prized Beethoven vinyl record boxes. Box seven, I think it was.

Much later there were Kali and Shino, a pair of elegant orientals who loved lying on their back on your lap to have their tummies rubbed. A Siamese called Ricky, who thought he was a dog and loved riding in cars and leaning into the corners. Another Siamese called Chisai Gi. And Boof, a blue eyed, profoundly deaf, pure white mongrel. And there were several more. Apart from Boof, they were a warm and lovable set of classy cats.

After annoying Judy about getting a cat for quite some time, an opportunity to mind one came up. Judy quickly agreed, thinking it would get that bloody annoying desire for a cat out of my system and stop the incessant hounding.

So Matey, a rather scruffy and skittish moggie was unceremoniously dropped off in a box, along with an equally scruffy and stinky cat litter tray and a dozen cans of home brand tinned sawdust in aspic.

Not quite what I had in mind, but a cat nonetheless. Yessss.

That afternoon we opened a can of the food/fishy sawdust, gagged at the smell, and put it in a bowl for him. He took one sniff, did the cat equivalent of gag, and just wandered off.

Fair enough, mate. I wouldn't eat it. So straight to the shops to pick up some tins of Kit-e-kat.

Which he gulped down.

I fell in love with the scruffy skinny little guy, amazingly followed in about five minutes by Judy also falling in love. We knew almost instantly that we didn't want him to go back to his former owner. Well, she was a "former" owner in our mind at that point, even if she didn't know it.

Luckily, almost as instantly she admitted that she really didn't want him back.

Matey was her deceased husband Ray's cat. Ray was a superb bloke, who sadly had suicided, so I guess Matey was an orphan by some measure, given Ray's wife seemed to want nothing to do with him. His real name was actually Misha, but because he was Ray's "little mate", he always called him Matey. It suited him so much better than Misha, as we came to learn in the many years to come that Matey was really a fight-picking, unkempt, dirty, blokey kind of cat, and at times a complete but lovable prick. Misha as a name was all wrong.

Coming to live with us, Matey decided quickly that his raisons d'être were now a full belly, a loving scratch under his chin, and the occasional good fight.

We were living in East Brunswick at the time, and every other neighborhood cat was told in no uncertain terms that he was here to stay. Ragged, bloody ears came home. Abscesses that needed the vet. The odd limp.

But he was happy.

For what seemed like ages we didn't hear him purr, as cats are want to do often. But our Judy opened the floodgates on that front when she became heavily pregnant.

A pregnant woman's core body temperature is often around one °C higher than normal, and Matey maximised this opportunity. It was quite possibly the best time of his life. He would pin Judy to the couch and nest between her big twin filled tummy and voluminous twin boobs, snuggling into this super heated swollen bosom. And boy did he purr. Judy could feel it... a whole body purr.

After some time, this learned behaviour of body heat seeking became invasive. Back at work, Judy would be working a night shift, so Matey would sleep with me all night, usually draped around my head. I'd get up, pulling fur out of my nostrils as Judy was crawling into bed. So with a huff, he would re-drape himself around Judy's head and play on for another 8 hours.

Often in bed we'd be woken up by a presence. Staring. On opening our eyes we'd be greeted with a sight not unlike the image at the top of this story. This alertness would usually be rewarded with an outstretched paw and a claw hooked right on a nostril. Or your eyelid. Affection, Matey style.

More affection was heaped in the form of head bunts. When cats bunt heads, it shows others that I belong with you and you belong with me. This head bunting is a way for cats to exchange scents so that everyone in their environment smells the same (in the wild, this would be all those in their colony). Cats activate glands that excrete pheromones on the area of their head just above the eye but below the ear, then rub it all over those they belong with. You've probably seen them do it.

With Matey, bunting was not a gentle rubbing. It was usually delivered with the ferocity of a pub fight head butt.

Another Matey hallmark was that he did not meow, as such. What he did do was more like a short sharp aggressively delivered cat equivalent of "hey!", which you would hear in your mind as "hey! bitch!" A kind of short sharp "ah!" sound, always delivered like he was pissed off.

A good example of when this "ah!" sound might be used was during Judy's Ansett days. He hated the spotty uniform shirt, and when he saw it come out of the cupboard he would get all huffy, because he knew Judy would be going away from home. And bed. All his charm would be gone if he could speak. That "ah!" meant "Where you goin', bitch?" "Bed. Fucking. Now."

From humble beginnings with Kit-e-kat, throughout Matey's life there was an escalation of expectation of food quality. It was amazing how through non-verbal communication he caused this to happen. I still don't quite know how he did it.
We went from Kit-e-kat to Whiskas, to Dine, to Fancy Feast, and then to fresh kangaroo meat. If he'd lived any longer by now he'd probably be dining on Beluga caviar and lapping at Dom Pérignon.

One staple through the culinary escalation was a bowl full of dry food. Crunchies we called them. In time, though, he would only eat the very freshest top layer, freshly sprinkled from the box, in his presence. There'd be a bowl full of the things, and he'd be under your feet while cooking dinner: "ah!"... "ah!"... "ah!"... The only way to shut him up was get out the crunchie box.

Maybe all cats are just cute little pricks? We tolerate them because they're sooo infectious. Well, all except dad, who still would be pissed off about Beethoven box seven.

Cancer on his spine took him in the end, at the ripe old age of twenty-something. Yet again, fuck cancer. But he'd had a bloody good innings.

We remember him every day. In fact, he's entered our vernacular. Judy and I to this day still use that aggressively delivered "ah!" as a greeting, or just randomly. I guess it's our form of a smoochy kissy "mwah!".

People probably hear it and think: "what the hell?" But we don't care.

He was our mate. God love him. The little prick. 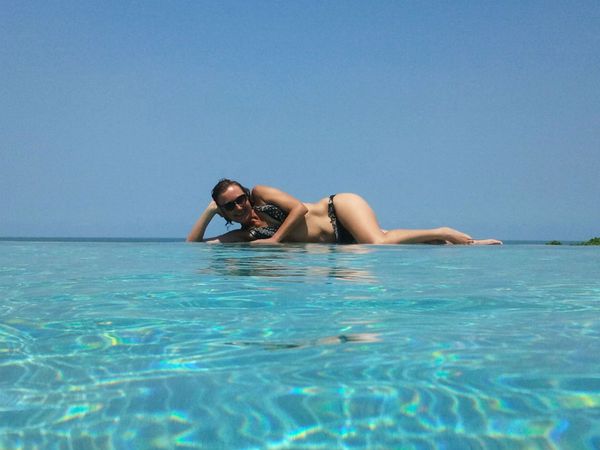 The hero of this story is an understated and unassuming sort. Looking at Judy's first scans when this all started we could not believe our eyes. It looked like chunks had been taken out of her spine. But a little hero is helping put missing bits back.