If you go through a list of the known places that cancer has sprung up around Judy's body, included are some seriously important bits and pieces, like her liver and brain and some small spots in her lungs.

There are other places of much less importance at this stage, like lymph system and muscles, and some worrying places like her pericardium, which is the double-walled sac that encloses, nourishes and protects her heart (wouldn't want that to be messed up, would we?)

And it's in some of her bones.

While not the most critical of places, combining bones and cancer is not remotely a good thing, as when cancer gets into bones it leaches calcium into the bloodstream.

At face value, you'd be forgiven in thinking that this might actually be a good thing. After all, we're always told to eat yummy cheeses and milks and supplements to add calcium to our systems to keep our bones strong.

Thing is, 99% of the calcium in our bodies is as hard stuff in our bones and teeth, so there is normally a very small amount floating around elsewhere. When significantly high levels get into our bloodstream it can lead to a variety of wide-ranging health issues. Some of these are really quite nasty.

Indeed it was a very high blood calcium level (in medico speak "hypercalcemia") that lead to Judy being hospitalised quite quickly after her diagnosis of metastatic breast cancer.

(But don't worry about eating too many cheeses and supplements ... that doesn't cause hypercalcemia. Oh, and more than 99.99% of cases of hypercalcemia are caused by something other than cancer.)

I suppose that the most obvious not good thing about cancer and bones is that bones hold us in the shape we are, and are a key framework that just about everything in our body hangs on to.

When Judy and I saw the first medical imaging CT scan after she was diagnosed it was hard to believe what we were seeing when it came to Judy's bones. The cancer splotches in her liver and other organs elsewhere sure did look just like areas of difference. Just splotches. But it looked like there were chunks taken out of parts of her spine.

"Fucking hell. How am I still standing up?"

Soon after that, both of us started remembering things. Realising things. Correlating things.

And came to the conclusion that she had indeed still been lucky to be standing up.

We take a lot of holidays just north of Cairns, in far north Queensland. A tropical spot, where in the wet season it feels so hot and humid you find yourself unable to take off enough clothes.

This leads to a lot of swimming in the pool. And associated activities like ball games and horse play.

Several years ago, while splashing about I found a ball on the bottom of the pool. It was rather small and admittedly a rather hard ball, but innocent looking. As you do, you find a ball and you toss it around, again and again. After not too many times around Judy retired from this game with a very hurt hand. A quick visit to Cairns hospital in the days following revealed broken bones.

Broken bones from catching a ball? The hell?

A year later, she was dashing into our house and slipped over on a rug on the wooden floor. Her legs and feet ended up squished under her frame (a slender frame) as she lost her balance. It hurt.

What was she dashing for? Ah, the hidden dangers of being amourous. I dusted her off, picked her up and took her to bed.

Wonderful stuff endorphins. They lasted her a few hours until she descended into quite a lot of pain.

Hospital visits eventually revealed a Lisfranc injury, which is where one or more of the five mid-foot bones are displaced from where they normally are attached. It's seen occasionally in elite athletes (Dane Swan, Mitch Clarke and Matthew Richardson are examples), so with that company you'd have to assume Judy is an elite. Other examples of how you get this kind of injury are having your foot being run over by a car or truck, or industrial accidents, or major car crashes. But from slipping over running for canoodling? The hell?

In Judy's case, this Lisfranc injury resulted in surgery, serious extended immobility lying with "toes above her nose" for weeks for 98% of each day, repeat surgery to take out pins, eventual physiotherapy, plus a recovery period that spanned many, many months. It's still not quite right years later.

In my case, her Lisfranc injury and repair immobilisation lead me to learn to cook far more than just a barbecue, but that's the only silver lining to the experience.

A doctor at Epworth hospital emergency: "I can't find anything wrong..." Would it not be considered wrong that she can't walk on it at all, and hasn't been able to for many days?

Eventually the right scans were initiated, and back at Epworth another day we met with a different doctor who tried to atone for the previous doctor's evident sins by gifting Judy a "moon boot" worth considerable money to support things until she could see a surgeon to fix it.

The earlier break in Judy's hand, and this Lisfranc foot injury should have spoken volumes that something was seriously wrong. We're not certain cancer or its flow-on effects were to blame, but in hindsight...

Judy had been seeing a chiropractor often and over many years to try and sort pain issues in her neck and back. Crack, crack, crack. Right up until it was diagnosed that her cancer had spread.

Honestly, with chunks eaten out of her spine we're lucky she didn't end up a paraplegic or worse.

So now to the hero of this story. And I can't sing this drugs praises loudly enough.

Just a jab. (Sorry. Bad rhyme). Just a needle in the guts every four weeks that is designed to treat osteoporosis, treatment-induced bone loss, and metastases to bone (a.k.a. "My Tasties"... We love you, Nellie). The tasties, sorry metastases to bone being of particular interest to Judy and Dr Rob.

Of all the procedures and drugs administered in the Day Oncology ward at our hospital, this one would have to be the quickest, and simplest.

With just about everything else in that place there is the insertion of a cannula to attach drips to (and associated palava of heat pack, find a vein, dig around, get someone else to have a look, choose a smaller cannula, get a "vein whisperer" to help), there is saline hanging from poles, there are lines attached with other drips to feed in anti-nausea drugs, there are several offers of tea and biscuits, and then finally the drug itself hung on the pole.

With Denosumab it's in-round-jab-and-out. Too easy.

After several months of Judy receiving injections, Dr Rob pointed out to us on one of the later CT scans a beautiful bright white shell around the holes from chunks that had been hewn from her spine, seemingly cocooning and repairing the damage that the cancer had caused. It was slowly but gently un-fucking up this most horrible of genetic fuck ups.

Awesome drug. No perceptible side effects. Does exactly what is written on the tin.

The chemotherapy and hormone therapy drugs are the ones that always take centre stage in breast cancer battles like this. But I want to give a big shout out to a wonderful little drug called Denosumab. 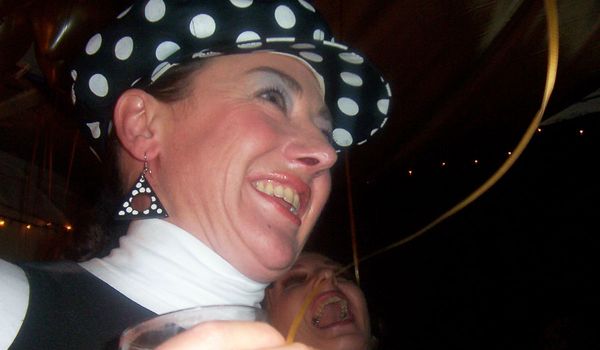 For Judy and I we most enjoy music in The Hutch. Music expresses situations, hopes, desires, sadness, gladness, anger, love, fun and frivolity. It says many things, but lately has been hard to handle.