The last time it did that, it became somewhat runaway soon afterward indicating lots of cancer growth, and that required a change of long-term treatment option, and also some more chemotherapy.

Having to change treatment is never good. For starters, it means one less option for the future, and then you generally need to wait on tenterhooks to see whether it is working. If it does, then happy days. If it doesn't, then you just burned yet another option.

People respond very differently to the array of cancer treatment options available. One drug may work wonders with one person, but not at all with another. I'm sure it's not lucky dip, but the science behind that yea or nay for the most part seems to elude even the oncologists.

So with that in our heads, last week's up-trending marker score resulted in quite a shit day, as you'd imagine.

Just one week later, and today was a good day.

But pictures are simply the best. This disease simply can't hide from the radiographer's happy snaps, whatever else might be happening.

And happy snaps they were today.

Dr Rob was delighted with how the CT looked. Well, as delighted as a man can be looking at cancer. There was a lot of relaxed and mostly happy chit chat, which is good, even if most of the chit chat was medically related.

The scan covered her entire torso, and looked very much the same as it looked last time. In fact, he was even having some trouble this time finding some of the worrisome splotches. One suspect spot in Judy's lung was now barely visible, and other gray blobs were still small and seemingly under control. No new spot fires were evident.

The same or better.

For now, there will be no switch to a new and untested option. The reign of Afinitor the Mighty and Aromasin the Amazing will continue.

So why the up-trend of the tumour marker CA 15-3, though?

It's a bit of a head scratcher.

The tumour markers are the traceable stuff that actively growing cancer leaves behind. Cancer poo, I guess.

And that marker would not show the worrisome up-tick lately without good reason, so something bad is growing somewhere.

Judy's head doctor will MRI her beautiful brain next month, and hopefully that will also be ruled out as the culprit. Her eye is no worse, she has no headaches, so we've no reason to believe Dr Sasha will see anything either.

We had the thought today that it could be the cancerous lumps and bumps in Judy's skin setting off the cancer poo alarm. The lumps give both us and Dr Rob a scan-free guide to how the cancer everywhere else is tracking, but if they're going to give us false alarms then they might just need to go.

Pop-crackle-pop with some radiation therapy should see them on their way.

We're somewhat fond of those lumps, but maybe that's akin to Stockholm syndrome. Given the secrecy, ugliness and brutality of this awful disease, I shall name our fondness of Judy's lumps: Pyongyang syndrome. 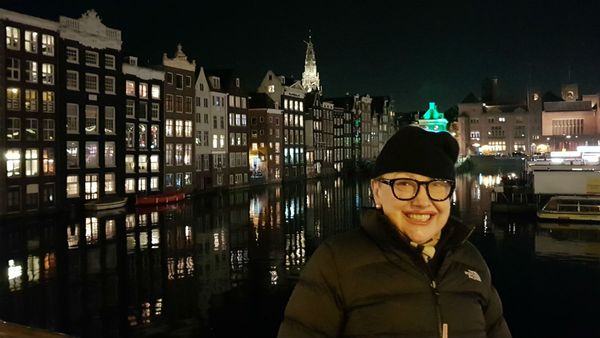 Judy and I recently spent some time in Amsterdam. We learned that the people of the Netherlands are patient, tenacious, resourceful, open to new ideas, learn from their mistakes, and are necessarily tolerant. Not unlike oncologists, really.