Having stage IV cancer fills one's own life with plenty of anguish. Anguish also fills the lives of those immediately around you. Fair enough.

The nature of a disease such as this is that it is a progressive thief, stealing bits and pieces here and there of your body, your mobility, your sense of hope, your dignity, and normality. You know this. And it plays on your mind, always building anguish.

You'd think that nothing else in the whole wide world could possibly heap any more anguish on top.

The initial shock of knowing what you have gives way to learning about what you are soon likely to have far more of in the future. Which is increasingly crap health. Thankfully that gives way to learning what can be done about it to manage it as a chronic disease for the long haul. And with that stability, thoughts turn to hope of something more. Like a cure, yet to be invented.

The time frame associated with "long haul" is immaterial; what matters is that there is more of it, however much. And living it well is what needs to be done.

To a certain degree, the thought that the whole wide world couldn't heap more anguish is true. But it has been gob smacking for me to learn that people sometimes seem to just find a way to up the ante, and unbelievably by focusing on the stupidest shit.

The last time Judy and I went to Hong Kong, earlier this year, Judy had a beautiful Chanel style dress and jacket made up by our tailor. Its first wear saw it accessorised with pearl earrings and bracelet that she already had, and I suggested that the outfit could absolutely be completed with a string of matching pearls for her neck.

Excited, Judy set off to the shops to pearl-shop, knowing exactly where a string to match her bracelet could be found. In her travels she could get a haircut too, as her favourite hair cutter was right nearby.

I don't know what it is with hairdressers and chit-chat. We seem to spill our lives to them for some reason. Maybe it's an intimacy thing with them messing around with stuff that's so close to our brain, in which our soul resides. They know about our travel plans. Our family. Our health and aches and pains. Our wants and desires. And they know about our pearl shopping.

So in conversation: "Why you buy pearls? You sick." and a slight pause... "Ah well, you can leave to me in last will."

Judy normally doesn't buy special things for herself. But I must admit, since cancer she's actually getting with the programme. Our hairdresser just mentioned would only see irony in this, but I think it is a sadly brilliant watershed. Accordingly, to have random people in life turn that positivity into angst really pisses me off.

A mood of impending finality does seem to be found among some advanced cancer sufferers, but overwhelmingly the sentiment is one of positivity.

There are questions posed as posts on a breast cancer ladies group to which Judy belongs, like "Do you still buy new clothes?". Some do say no, but the vast majority are "hell, yeah!". Some ladies in the US are even buying new-to-them clothes by the pound (an affordable alternative there), and sometimes they get some real gems that they wear with pride: Victoria's Secret, Levis and more.

Most brilliant, I think, are those that will buy nice clothes only to wear them to medical appointments. A summer frock to wear to chemotherapy, or a stunning pant suit to see their oncologist.

With Judy there are still some hurdles with self-serving acquisition, but she's getting there.

Many sufferers of cancer have weight fluctuations, and some stories are extreme. This is usually due to treatment, or to the disease itself, and both have their extremes in terms of gains or losses. One example is a lady who started at U.S. size 6, went to size 18, and is now in size 4. She would have needed to buy clothes just to cope with day-to-day.

Thankfully, Judy's weight has been quite stable, allowing her a set of stable staple outfits, but that hasn't helped on the seemingly selfish self-acquisition front. She hasn't really needed to go out and fill her wardrobe with new things, so for the most part she hasn't.

So she likes and wants new clothes, but seems unwilling to go get them, and doesn't have a catalyst.

Time for some help.

For some time Judy had been desiring a jacket. A rather special jacket made by Polo Ralph Lauren. It was what I would describe as a perfect "Judy jacket", being just perfectly suited to her and the styles that she so often wears. In fact, to look at it, it could have been designed specifically with her in mind. That it seemed financially and therefore frivolously out of reach was a source of sadness for Judy, and even resulted in a tear on one occasion. That just wouldn't do, as to me it was perfectly in reach, and no folly whatsoever.

However, it also seemed that this jacket was made of unobtainium.

This humble bloke had tried, and failed to obtain it. I just couldn't find it. So it was clearly time to call in an expert ... the shopping cavalry, if you will.

If anyone could cause this to happen it was Barb. Step mum extraordinaire.

The prime directive was simple: Find the jacket. Secondary to that was acquisition of clothes that Judy wouldn't dream of acquiring herself. Wonderful Barb accepted this challenging mission in a heartbeat.

The cavalry arrived, complete with my dad in his finest chauffeur outfit to whisk the girls to shopping Mecca. (I love how he does little things like that, supported superbly by his preferred motor, the Jaguar. AKA the Jaaaaag.) There was much Ninja shopping involved, but sadly they came back empty handed on the PRL jacket front, if only replete with many other wonderous things.

The nature of designer clothing is that styles come, and they go. And it would seem that this particular jacket was so-last-season, and actually unobtainable.

Some months later, I think I did a pretty good job of making good on a PRL jacket while we were in Hong Kong. It was not the exact same one that she wanted, but it was a stunning example nonetheless, and a perfect "Judy jacket".

"I prefer to buy stuff for other people. It gives me so much pleasure."
- Judy

To me, Judy is a clothing contextualiser. She cares not so much about how much it cost, however seemingly the less cost, the better the sense of pride in having obtained a brilliant thing at such low cost. Far beyond that, she cares so much more about the micro stories carried in the item.

To explain, an outfit she wore recently as a whole was superb, but to hear the story of its component parts took it to next level. It was because each bit had meaning that was relevant to living Judy's life that made it truly special.

The top was from from Zara Chadstone. She used my sister Emma's gifted voucher to buy it, which she receives every year on her birthday. That year Emsie called me and said she felt like doing something different because she always gets Judy a Zara voucher, but I encouraged her to do it again because Judy loves it so much.

The belt was from H&M Berlin. It was purchased just after some cops wanted to shoot her ... long story. It was a bargain at just 5 Euro.

The jeans were K-Mart Chadstone. So cheap at $15. So comfy. Her friends Suzy and CeCe encouraged her arse into them, and now plenty comment how hot that arse is within.

The shoes were fake Gucci mules from the Mong Kok Ladies Market in Hong Kong. A bustling, vibrant, eclectic and really smelly place that holds a special place in Judy's heart.

Unlike something you stick on a shelf to collect dust, a smashing outfit is so much better as a souvenir and container of memories. You're reminded of the holidays, and people, and associated thoughts every day.

It doesn't matter the price of the thing, but it does matter the significance. If it's significant, and somehow shapes your life, then don't pass it up. Just buy it. The value of significance will far outstrip the price, whatever that price was.

So yes, cancer is a thief, but it's plain to me that there are some things it just cannot steal. Those things are experiences and the significant and meaningful everyday items we can use to remember them daily.

Cherish every moment and every memory. I know we do. 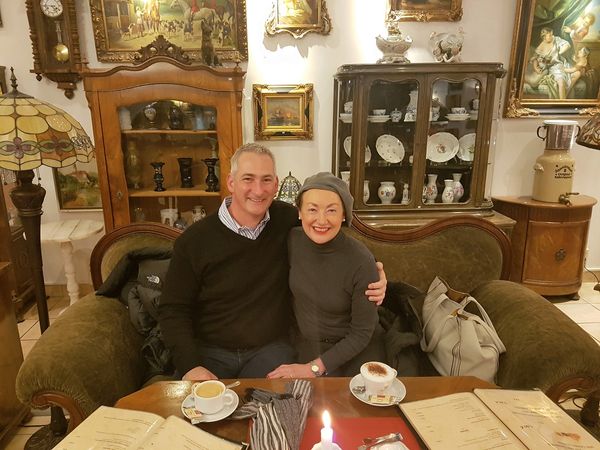 The mere things we have are certainly not the staff of life. If we consider all the things we accumulate in life, they rarely add anything to the impact we have on our cherished loved ones.