Judy finished her second round of chemotherapy with doxorubicin a couple of months ago.

Doxorubicin a.k.a. adriamycin, rubex, and also the Red Devil, given its colour and side effects.

The end of this round also marks the maximum exposure to it that she should have, as it really is not good for one's heart, so that's one available treatment option now apparently off the list.

Chemotherapy was used by Dr Rob to regain control after the failure of a couple of different hormone therapies that were intended to control the growth and spread of her disease. One worked for months (Tamoxifen), but the other was totally ineffective (Femara/letrozole).

So after regaining control, it was with some trepidation that Judy moved on to the next hormone therapy option.

Right from the outset, and before she even took any, we liked several things about this next combination drug choice.

The first was the names. Afinitor and Aromasin. These conjure up images in my head of a gentle aromatherapy session administered on a battlefield whilst wielding a massive sword that I shall name Afinitor the Mighty. With names as strong as these, this must be good.

The second was the price. Afinitor (everolimus) is not one of your common all garden medicines, and aside from killing cancer is also used to stop rejection in some organ transplant scenarios, like kidneys. Thankfully it is subsidised heavily by the government Pharmaceutical Benefits Scheme here in Australia for use in fighting Judy's condition, meaning we pay $40 a box, which is the equivalent of a roll of Mentos mints a day or one bottle of good quality quaffing wine per month.

If it wasn't subsidised then for thirty days worth it would set you back the equivalent of having a bottle of Penfolds Grange Hermitage, a one time Wine Spectator "Wine of the Year" every three or four days. The pharmacy kindly lets you know this by printing the list price of $5,279.52 right on the novelty sized box. Like Grange, it must be good. (By the way, I've got absolutely no association with Penfolds Wines or Perfetti Van Melle, other than loving their products.)

Aromasin is more modestly priced, and used to treat breast cancer in women whose cancer has progressed after surgery, radiation, or when other cancer medications have been tried without success.

Despite the price of some of these drugs, even if they weren't government subsidised at all we would find a way and gladly afford them. It's a no-brainer.

And, so far so good.

When Dr Rob first mentioned that these drugs might be our next step, our interpretation of what we heard in that meeting was that Afinitor sounded like it was an almighty immune booster, which would be coupled with Aromasin to result in increased effectiveness. Naturally Judy and I were very exited about that.

However with the second mention in a subsequent discussion we heard the words "immune modifier", and despite this still felt cautious optimism.

But it was the third discussion to actually prescribe and start taking it that revealed that Afinitor really acted as an immune 'suppressor'. Over-selling in the first instance? I wonder now whether the first mention was what we wanted to hear.

Regardless of what it might do to your immune system, the first blood test saw tumor markers move the right way, and two months in we're feeling pretty optimistic about the next blood test next week.

It would seem, though that in life you rarely get something without giving up something.

The common side effects of Afinitor the Mighty include:

Normally when you see a list of side effects they are largely taken with a grain of salt, as only some of them might actually affect you. With Judy, she has ticked every single box on that list above with the single exception of acne.

Something to look forward to?

"Yeah, there are side effects. Maybe I'm becoming mentally immune to them.
I'd rather just be here."

There is increasing nausea, with the odd vomit mostly caused by thickening of mucus in her throat. She describes it as almost being 'stringy', and this comes and goes.

And for the first time on all these medications, this is the first time that Judy's appetite and taste has been affected. Normally it's chemotherapy messing with taste buds, causing metallic tastes in food, or making one favour sweet things when normally savoury is a favourite. She eats much smaller portions now, because she can get quite nauseous if she eats too much.

If anyone else is on this mighty drug, then Judy can share that specific foods are great. Minestrone. Chilli con carne. Eggs Benedict. Lamb kofta sticks with garlic sauce, taboule and potato gems (royals). And party pies.

The party pies have been consistent through doxorubicin, Tamoxifen, Femara and now Afinitor, so I am not convinced that this choice is anything to do with affected taste and nausea at all. After all, who doesn't love a party pie?

But she's tracking well. After all, a lot of ladies in similar circumstances call it a 'win' for any given day if they make it from the bed to the couch. 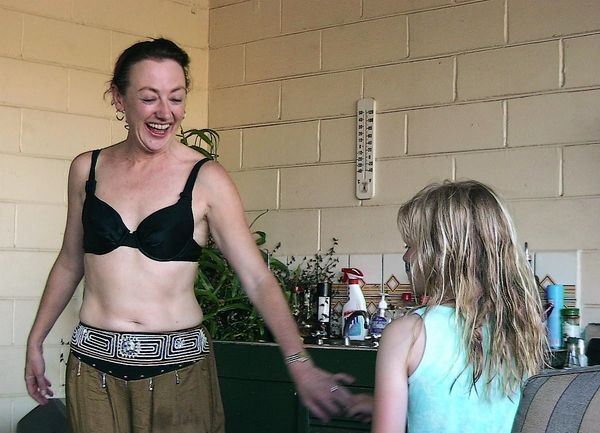 Judy has been seeing Dr John for what seems like the entire time we've been married. Despite messing around with her boobs, he's an 'other man' in her life that I tolerate well.