We went to see Judy's first oncologist last week for the latest in a long series of check ups that have seen out many, many years since early breast cancer almost a couple of decades ago.

Judy has been seeing Dr John for what seems like the entire time we've been married (actually he's Associate Professor John, but I'll call him Dr John for short). Despite messing around with her boobs, he's an 'other man' in her life that I tolerate well.

Inquiring how things went, our son Alastair was surprised to find out that that Dr John was a man, as he assumed that a doctor of breasts would be a woman, given many women would be more comfortable discussing and more importantly showing their lady bits to another lady. Watching his face you could see him weighing up possible future career options...

Dr John is so old school, and this reminds us just how long this cancer journey has really been going on.

There is a total absence of medical computer technology in his office, and instead the tools of yesteryear prevail. A paper bundle of medical records wrapped in an elastic band arrives with him, which is placed on a desk containing a leather writing pad, some pens, several copies of Reader's Digest, some knickknacks from overseas trips next to health pamphlets, and a pad in the middle of it all with a medical drawing of a nude and curvy female form that would be used to illustrate discussions.

The picture in my minds eye from a visit almost twenty years ago is near identical.

Unlike Dr Rob, who is Judy's regular oncologist these days, there is no desktop computer, no tablet, and no smart phone to be seen. I think it a fair bet that this man does not tweet nor share on Facebook.

He views films on a light board on the wall, so when an envelope with ultrasound pictures was not forthcoming on this visit, he asked Judy to remind them next time to print the films for him. He makes do with a paper letter describing the things that the ultrasound clinician saw, and you can see him visualising what the words say.

In contrast, Dr Rob accesses all scans and letters from clinicians using a computer-based system networked to other clinical and pathology providers, and we never see him use paper and film records. With him, if paper is involved to write anything down you can be sure that the contents are converted into electronic records immediately following the consultation by staff that support him.

But despite the lack of high tech, with Dr John there is his demonstrable experience, his calm demeanour, and the small fact that he stopped Judy's initial breast cancer in its tracks so long ago that fills the room with confidence.

On this day our confidence is rewarded.

The ultrasound he ordered was to check on several lumps in boob number two (not the one with the original cancer) that had been discovered in a prior ultrasound. Thankfully these were declared "stable".

Had this not been the case, in all likelihood there would have been a requirement for further surgery, possibly extending to mastectomy of poor boob two, significant recovery, risk of infection and plenty more.

So we were truly rewarded.

That day Dr John was very good at explaining that ultrasound clinicians tend greatly to look for the very worst angle of nasty growths and aberrations, twisting and turning and angling and zooming and freezing right at a time when something looks as clear, and nasty and vulgar as possible. So it was almost with a wink that he further explained that their letter describing these lumps as "stable" really means they are the same or better.

Eighteen years ago, when all this started, Judy was reminded by her gynecologist, Dr Janet, that if she ever found a lump in her breasts to come straight back.

Incredibly, it was just a week and a half after that timely reminder that Judy did actually find one entirely by chance. So there was a mammogram and ultrasound as a precaution ("It's probably nothing, but since you're here, go across the road for the tests right now"), then officious nurses that had been growling "Mrs Saunders" now stroking her hand with concern and calling her "Judy", then a whirlwind admission to hospital, surgery and all the rest.

Judy didn't call me immediately after this initial diagnosis. In her words: "I had no words. How do I tell my soul mate?" Ironically, her mother, the very person she headed straight to for comfort did not ask how things went, despite Judy calling her earlier to ask if she could mind our sons a bit longer because she needed some tests. "They think it's cancer". "Oh, sorry I didn't ask". Isn't it so easy to get consumed with ourselves and not involved with others, even those who should be our most cherished?

Feelings of happiness and enjoyment and satisfaction in our lives do not come from ourselves; they always involve others, especially our most cherished.

Finding that lump was mercifully as simple as scratching her chest. I'd imagine that if she were amply endowed (as having huge tits might be described), which she is not, then the equivalent of that simple scratch might have needed the breast equivalent of a careful hunt for a needle in a haystack. Her lump was really not very big, so in that regard being compact was brilliant.

"Great. The worlds smallest tits are trying to kill me."

Women who have smaller breasts in general don't like it, but in many respects I think these breasts are great. They won't be challenged by gravity (to this day Judy's are still perky). They don't hurt when running (Judy often wears a bra for cosmetic and warmth reasons, not support). They swell to relatively enormous proportions to feed babies (Judy's did handle twins, after all). And I think the "worlds smallest tits" saved her life eighteen years ago.

There are downsides, sure. They really are not so great for mammograms, where someone tries to squish your tit between two plates in equipment resembling a garbage compactor crossed with an alien. Judy says they see it as a great personal challenge to try and get as much as they can of her squished between those two plates. Given the lack of material to work with it bloody hurts.

But really, that's where the downsides with small boobs ends.

Judy recalled for me the first of recent visits she made to Dr John following diagnosis by others that her breast cancer had spread extensively. For one so proper and well spoken, all he could say was "What a bugger... Bugger." as if he had failed.

There is apparently a 30% recurrence rate after early breast cancers are seen to, which is quite good odds. But given Judy was so young when first diagnosed it would follow that she would be at a greater disadvantage for recurrence when you compare her to those women who are struck by breast cancer later in life.

If you find yourself in similar circumstances, be vigilant, and be aware. This old foe is sneaky. Oh, and if you've small breasts, do please celebrate them. 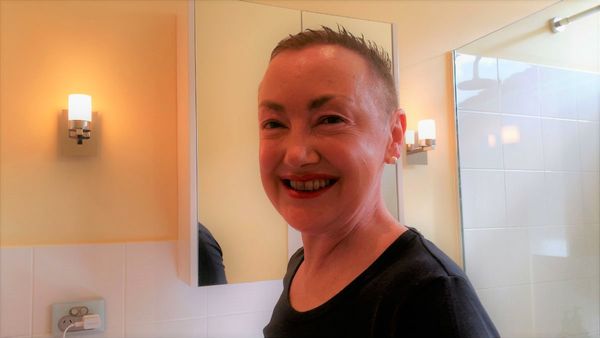 With shared experience of cancer there is heartfelt empathy, there is strong camaraderie, and a desire to listen more than speak. Sometimes words fail.