I find myself most of the time trying to ignore cancer survival statistics that are contained in articles that I read.

I try to ignore them because some of the time, whenever I do pay attention a fog descends.

I read so much delivered by Dr Google, and I read so many things that are like a slow motion horror story replay of all of the crap that has befallen others, has befallen Judy, and also future crap that will in all likelihood befall her.

Much of what I read is sprinkled with lovely medians and time ranges of experiences, offering a foretelling of how long we can expect her to survive.

I go hunting for this stuff to make sure that Judy and I are as well informed as possible of impact, treatment side effects, what to expect, whether to expect improvement, and whether there is anything at all that we could be doing to ensure my super spunk is as well looked after as possible.

I also hunt to read about fantastic new research, given that today her metastatic breast cancer is not a curable thing. Smart people are coming up with new stuff seemingly every other day, and that stuff is great to read.

I guess I mostly hunt for hope.

It's a hunt to do one simple thing: extend our time as a family as much as possible.

For sure, much of it is not cheery stuff, but I think it is something I need to do. After all, putting your head in the sand will only have one outcome, so hunt I do.

The things that I research seem to change every several months, as the journey unfolding encounters new cancerous curves and metastatic meandering.

I used to read all about hormone treatments, and the wonderful experiences of people living for years, even decades. Then it was on to wise men's gifts and other adjunctive therapies, trying to ease pain, see off skin lumps and give the proper therapies like chemotherapy the best run. Then it was about stereotactic radiation. Then about blood/brain barriers with respect to chemo's effect. Then the complexities of the human mind and central nerves.

Although naive, I knew fighting it wouldn't be as simple as the story of Hans Brinker, the little Dutch kid who legendarily stuck a finger in a leaking dyke to save Haarlem in The Netherlands from imminent flooding disaster. Hearing that story, you know in your heart that sticking a little finger in a leaking hole in a big wall to save a whole town is a big pile of absolute fanciful horse shit. Nice thought, but that town would be properly fucked if any significant leak were not instead assessed by engineers, pumps cranked up, walls reinforced, emergency services briefed, and root cause repaired. Then use the lessons learned to proactively ensure that identically constructed walls nearby won't start leaking when no one's around to stick a finger in them.

Metastatic cancer is definitely not a one-finger-in-hole fix. But unlike real-world successful dyke fixing, it would seem that no amount of doctoring can yet plug all the leaks sprung with metastatic cancer.

So now, my research hunting has turned to leptomeningeal metastasis in breast cancer.

I haven't written the name leptomeningeal metastasis before in describing Judy's ills, despite having written plenty about this particular ill over the past five months. Its name sounds much more serious than "tiny tumours", and "clogged head plumbing", and Princess Wobbly Legs, and droopy moments, and hallucinations, with a dash of "Metho T-Rex" and some remedial nuking from orbit. Leptomeningeal metastasis is when cancer spreads to your central nervous system.

This is really fucking serious.

Or so a bunch of medical paper-writing statistics-loving boffins tell me.

Historically, as measured some decades back, around 5% of metastatic breast cancer sufferers ended up with this nasty. And in future history the percentage looks like it will get even worse. It's likely getting worse not because of the amount of sugar or fat we're consuming, or any cancer-related fear-mongering bunkum like that, but rather for a couple of other very good reasons.

The first is that scanning technology is getting better with each passing year. In the olden days it was quite hard to pick up this leptomeningeal mess, even at autopsy, so the real percentage was probably higher had the old docs had access to high resolution medical imaging.

The second reason is ironically because medical science is getting way better at beating back the spread of cancer in general. Survivability is way longer today than it ever has been because of improvements in chemotherapy and other treatments, yet the blood/brain barrier, still being a hindrance to many drugs having good effect in the central nervous system would be why cancer eventually thrives there. Better drugs = longer life. Longer life = higher chance this central nervous system shit happens.

Judy and I try to put it out of our head, pun intended, as much as we can. That's not so much because we want to shove our heads in the sand and ignore that it's a problem, but more because getting consumed by it and moping about it doesn't help.

By the same token, just by being positive alone isn't going to fix anything, but being positive puts you in the right frame of mind to go fight the fucker mentally, and not just lay down. Be open to hope, and not resigned to a statistical inevitability.

The beautiful, and kind, and compassionate Dr Rob knows all of this stuff that I read, like the back of his hand, and uses that knowledge in the best way he can, based on the information that he has of what wants fighting right now. Our trust is placed in his hands alone, and it is a trust that Judy and I unwavering place firmly. He is our rock. He never gets all fatalistic, whatever is being thrown up, whatever the stats say, while all the while gently getting on with the best job of keeping my princess as ship shape as possible, come what may.

He knows the odds and stats are bad, but would appear immune to outwardly letting them ruin hope.

For me reading about what he does, much of it is like a retrospective horror story played out, where you realise that so many before have befallen exactly the same maelstrom, fought roughly the same fight, and have fallen unanimously, in separate battles, in separate time scale, and over many years to exactly the same or similar thing.

Stage four breast cancer sufferers are warriors, with broken shield, in an army of millions that they will never meet, in a war that is seemingly as futile as your average war. Yet every battle produces more: more anger, more knowledge, more hope, and hopefully more research. Good things can spring from battle and war, and hopefully some good will spring from Judy's battle, too.

"Has Dr Rob talked to you lately about prognosis?"
- Dr "Dezzie" Despina

"No, but Dr Google told me that it's not that flash."
- Steve

The research of leptomeningeal metastasis is so thin that the statistics lovers have trouble coming up with any reliable figures. Annoyingly, none of the figures they come up with are vaguely good, though. That said, there are always statistical outliers, and five months on since this leptomeningeal fuckery was found, Judy is still jetting here and there, living life large and refusing to lose.

We've been asked a couple of times now whether Judy has a medical power of attorney in place, and we kind of dismissed the question on both occasions. It was not because we don't know that Judy is quite in the shit, so to speak, but rather because we didn't understand the significance of the question. I assumed that just because we are married that I would be the one who could and should speak for the love of my life medically, should she not able to do so herself.

After doing more reading about that stuff, Judy should definitely put pen to paper, sooner rather than later. What if I am not around to speak up, like if she ends up in a hospital emergency department without me? What if her wishes are different to my understanding? Doctors fall back on rule #1: keep you going at all costs, but that needs to be tempered given cancer can get real ugly at the end, and a set of written wishes is the way to temper it.

The Princess Droopy Loopy events over the last few months with leptomeningeal metastasis have reinforced that this stuff can happen, and in all likelihood will happen again, and probably worse.

This slow motion cancer business is a drawn out game of second guessing how long to put off confronting shit, like getting one's so-called affairs in order, and also actually writing down what you'd like a doctor to be doing, or more importantly not be doing, so they can do it with unwavering certainty. As good as Dr Rob is, he's not a mind reader.

Still, addressing the things that need to be thought about will also bring thoughts of things even harder to think about.

For me, it's to open a cupboard, and smell my beautiful princess.

To see carrot cake in a cafe, and remember it was her favourite.

To climb into bed, our bed, and realise, over and over, and over that it is mine alone.

For now, I'm more than happy with our heads in the sand for a while, even though I know they can't stay there, and wont. For now, I'm also going to wring the bags out of life with my princess.

Let's all go do something impulsive, extraordinary and brilliant this week with our loved one, yeah? 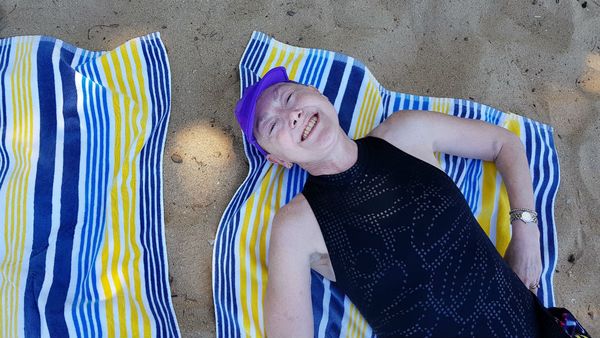 Life's small stories are as important as the big ones. When those small ones are passing, hold tight to them, and never forget, because they're far more important than you can imagine.