We've got an overseas holiday coming up. (Yay!)

The timing is not that awesome given Judy does have quite a lot medically going on at the moment, so hopefully we'll get away with it. It's impossible to foresee unexpected twists and turns with cancer, so one just has to book holidays, and look forward to them. After all, what's the worst that could happen? You'd think it would be that we just lose a bit of money if things have to change.

You can't ignore most things that want treating with metastatic cancer, but most things are not urgent and not that time critical. Cancer is usually slow growing, so a couple of missed chemotherapy cycles here and there to enable a holiday are neither here nor there with the overall result, and actually can be of benefit in letting the body repair itself a bit for the next onslaught. What's really important is that you are having a course of chemo to manage it, and not ignoring it.

But beyond your actual cancer there's a fair bit more you can't ignore. There is infection, there is a depressed immune system, general wellbeing, there is risk of injuries from falling, clotting risk, nausea, tiredness, weakness, surgery wounds and more.

Dr Rob is determined to not only get us to the destination in the case of this holiday, but for us to enjoy the destination. And that means keeping Judy out of any foreign hospitals while we're away.

"It'll be nice to have a walk barefoot in the sand... Good physiotherapy."
- Dr Rob

So last week saw a chest x-ray, head and torso CT scan, blood and cerebrospinal fluid tests, as well as a couple of shots of chemo. Early this week will see more chemo, another chest x-ray and more fluid testing.

Then we're off on Wednesday.

This flurry of medical activity is as sensible as giving your car a full service with fluid changes and top ups, safety inspection and check of tyre state and pressure before setting off on a long road trip. You don't want to be parked up at a mechanic in a one horse town just south of Shit Creek, ruining your trip waiting for a car part to arrive, do you?

The x-ray early last week showed some concerning changes in Judy's right lung since the last one was done a few months back. Dr Rob doesn't think the changes directly relate to cancer, as they seem more to be evidence of inflammation, like could be caused by infection. Pneumonia would be less than ideal while traveling, so some intravenous antibiotics in Day Oncology and oral ones to take on the trip have seen to that.

The CT scan showed some more swelling in her dodgy kidney, which he'll refer to Dr Ross (not a holiday deal breaker). It also showed a thin layer of fluid between her skull and brain that might be a subdural haematoma (bleeding outside the brain), or might just be related to her having recent surgery. He'll defer to Dr Gavin of Team Neuro for comment on that anomaly (probably not a holiday deal breaker).

Otherwise the CT was uneventful, aside from good stuff. It confirmed that her lung inflammation was likely slightly better, and importantly no worse than earlier in that week. It also confirmed reduced swelling in her brain ventricles because her shunt/drain is working.

Blood was tested for most everything. Slightly aneaemic, and sodium a bit low. CA 15-3 tumour marker very high, but expected to be.

Princess Wobbly Legs has also been super wobbly, with weakness in her legs caused by corticosteroids taken to reduce swelling in her head. But an accelerated weaning program, wrapping her in virtual cotton wool, and trying to help her every step of the way everywhere she goes should keep her free from physical harm on that front. I'm going to order her up a wheelchair at the airport.

Testing and treating and tweaking and preempting aside, Dr Rob also has anticipated the unexpected, too, by writing up a document to take with us explaining Judy's medical situation, treatment regimen, current drugs involved, contact details and plenty, plenty more, just in case unexpected unthinkableness does happen and we find ourselves south of Shit Creek.

So far things look good for taking off on Wednesday. This week will see more things ticked off the preflight check list, on the treatment, inspection and readiness fronts.

I'm freaking out a bit, but it will be OK. Dr Rob will do his all to make it OK.

It's not hope. It is unshakable belief in Dr Rob brilliantly doing what he does. Which is whatever it takes.

(Special thanks to the Day Oncology angels Violet, Amelia, Toni, Nadia and Ria, pictured left to right, for looking after my super spunk so very, very well.) 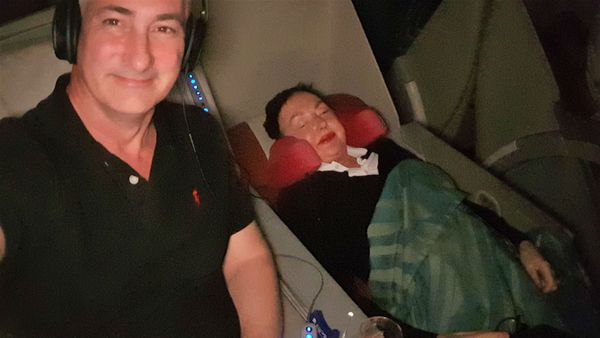 We’re on-board an Airbus in the pointy end headed to near-equatorial paradise at last. It's all falling into place...