We got away with it.

Well, departure, that is. Onward from here to the next part of our big adventure!

We’re on-board an Airbus headed to near-equatorial paradise at last.

With the last remaining apprehensive knots in my stomach ironed out, being so close to departure brought my first moments of stress-freedom in a dozen or more days. I was able to relax a bit. Able to fully comprehend the final count of zero big sleeps until we get away from it all.

Moments of calm began at home today and arrived in bulk when a wheelchair was almost immediately produced at check-in at the airport. Relax.

It’s late at night, but I’m not really that tired. I’m too excited for that. That, and I still need to be vigilant.

Judy is currently snoozing at 12,000 metres, flat on her back in a lie-flat business class seat at the pointy end of a Sri Lanken A330, and at last report was doing brilliantly. There’s around an hour to wheels-down.

We might have gotten away with it but getting away from it all was fraught. It’s still not without potential pitfall, though, but everyone has been exceptional in helping us out.

In getting away there was dexamethasone, and it still plagues Judy.

What the Hell is with dexamethasone? It’s very good at what it does, OK. Wow, I get that. It’s a corticosteroid that reduces swelling, and combats clear and present shit. But that dexa-shit’s fucked up.

Dexa-metha-shit has been absolute horse shit.

Her appetite recently makes her just about as fussy as a vegan, and as hard to get calories in her. She nibbles. She eats a passing parade of cravings. She tolerates some things, yet others might seem good at the time, yet end in bad news later. So unlike the supposed side symptoms say-so, she hasn’t been eating much at all.

Heck, she even turned her nose up at a party pie earlier today.

She’s 48 kilograms now. Given her normal weight of 54 that’s cause to worry.

The weight’s a worry, but the wobbly legs are far more so, and you can see from the reduced muscle size that that's where most of the weight has departed from. I go everywhere with her. I have to. It has been just too risky not to.

And … relax. Getting away.

And in getting away there were antibiotics.

A chest x-ray for Dr Rob showed evidence of an infection in Judy’s lungs, so being a good doctor, leading up to our trip abroad he set her up with some kick-ass antibiotics to head off at the pass potential pneumonia.

But with good doctoring (which has gone mighty good, with second x-ray clear of infection) comes the impact. At one stage, every slight up-chuck from nausea generated by the dreaded dexamethasone resulted in everything coming from everywhere without warning. Yep, kick-ass is right. My pretty lady was in a pretty pickle at times.

And then there's cancer.

Honestly cancer will just need to take a number, and sit the fuck down and wait until we're back.

We’re a bit worried about niggles in her hips, and neck, and ankles, and elsewhere, but we have faith in Dr Rob’s doctoring. Plus, with all this getting away from it all, and what getting away with it has entailed, ultimately a short break from chemo will allow Judy to deal with all the collateral doctoring and its impact.

For the niggles, and debilitating pain recently on waking each morning she has a fist full of oxycodone to deal, ably assisted by a slow release version of the same called Targin, so that helps immensely.

We're super excited about what tomorrow will bring! 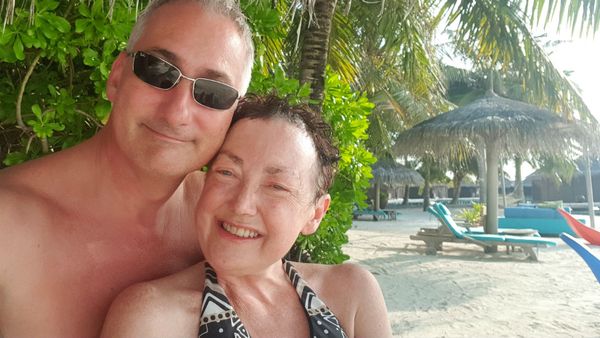 This cancer business with Judy is hard sometimes. But being as one with each other helps so much to not focus on it being so bloody hard.