Without wanting to gloat, I'm not bad I think for a self-taught cook.

As most blokes do, I started cooking stuff with tongs and a barbecue, and stayed like that for many years. I did rack up a lot of meat grilling hours by cooking on the barbie probably five nights a week through the warm months, but after barbeque season ran out each year, I would largely bloke-cook-hibernate for a self-prescribed well earned rest over winter, as most blokes do.

In barbecue seasons of old, Judy didn't get a rest from cooking, though. There were forever spuds to oven-up, salads to spin-up and chilli/spinach treats to fry-up and drizzle. And Jude insisted that the table always had to be set, with drinks and condiments laid out. We were a well oiled cooking machine team over the summers.

Then, many years ago now it seems, Judy broke her foot.

Of all the things to break, who knew that breaking a tiny little bone in the top of your foot could be so debilitating? It was called a Lisfranc injury, where one of your metatarsal, or upper toe bones are displaced from where they normally live, and it needed surgery and pins and all sorts. At one stage she needed to be flat on her back for 23 hours of the day, with her toes inclined above the level of her nose to prevent excess blood pressure in her foot hampering healing.

With life suddenly all chaise-lounge, she was in no fit state to cook, and wouldn't be for the best part of half a year.

The cooking situation was dire, too, because she broke it right at the tail end of barbeque season, which meant I was in uncharted waters.

Rather than panic, and go all Game-of-Thrones "Winter is coming!", or starve the family, or throw money at the problem with take-away, I decided to take over the kitchen. And since then, the kitchen has been almost exclusively my domain.

Being an obsessive sort, I didn't just cook stuff. Rather I went all Masterchef, doing quail-with-this, or duck a-la-that, creating sauces that needed finishing with bone marrow, tossing micro-greens, and sprinkling edible flowers (which the boys scraped off: Flowers, dad? Really?). We didn't just have a steak. We had steak with lightly steamed seasonal Dutch carrots, potato croquettes, chervil and micro-green thicket with a red wine jus. We didn't just have lamb cutlets. We had Moroccan spiced lamb medallions. We didn't just have fish and chips. We had spice-crusted ocean trout on zucchini salad with a zesty yoghurt dip and a side of shoestring fries.

Despite all the "plating up", rather than serving up of food, after a while Seb, Al and I were so glad that Judy was back on her beautiful feet, and was occasionally able to order me to "Sit down, Stevie. Tonight is my night in the kitchen." We were so glad, because Jude's cooking was always so wholesome, and comforting, and deliciously simple. She would say things like "I do cheap eats, and you do Masterchef", but that was being overly dismissive of the fact that she cooked good, honest, consistent and ooh so yummy delights with life's everyday staples, and always had an eye on minimising waste and excess.

In her last couple of years on the planet, whenever she infrequently cooked, just once every few weeks, it was almost always a humble Chilli con carne (with me man-handling the job of smashing up and browning up a kilo of mince for her so she didn't wear herself out), or her chicken, pumpkin and spinach risotto.

Despite all the Masterchef going on, these were two of our family's favourite meals, and in particular, the risotto.

Judy loved the drama on television of the Masterchef franchise. For hack cooks, all of them were so serious about turning ordinary cooking into brilliance, and fair enough: they were in pursuit of a shoe-box full of prize money, but more importantly a fast-tracked route into a good job in a top restaurant without needing to peel a million spuds as an entry-level cook's assistant on almost zero pay before getting noticed. Jude loved the successes, but she also loved the moments when simple things could bring them undone.

Every time a hapless contestant would attempt it, Judy would yell at the television, warning them, urging them, pleading with them to stop, and think, and remember contestants past, and do anything else but risotto.

It became a thing on that television series to refer to risotto as "the death dish". Everyone who had a crack at it made a complete balls up of it, and it often resulted in them exiting the show. God knows what each creation tasted like, as we could only see the result and process, but almost without exception they were awful, based on the faces the judges pulled, or at best lacklustre. Judy couldn't believe that these semi-amateur becoming-accomplished chefs could fuck up something so deliciously simple.

Being a bit Masterchefy, I heeded Jude's TV pleading and left any risotto jobs to her in our household, and just hoovered down the delightful end product.

Her recipe for chicken, pumpkin and spinach risotto was unwritten. It was intuitively and consistently made from memory, and with love, and with a list of ingredients and method stored solely in her head. Sadly, this means a favourite is forever lost.

Of all the things I could have asked her before she left the planet, the way to cook this risotto dish didn't even enter my thoughts. Fair enough at the time, as in our heads she wasn't going anywhere. In fact, any questioning regarding, or consideration of going anywhere was avoided by our whole family, as to do so would be to admit that she was going to die. Sure, she was, and that became increasingly obvious, but our world was one of hope and progress, and of embracing treatment and experience that would further life, not contemplate the end of it.

That Judy in particular avoided putting any pen to paper concerning an end-of-life advance care directive, which is an expression of one's desires for doctors to refer to in situations like heart re-starting, etc., speaks volumes as to why such a flippant thing as continuing a risotto heritage didn't get consideration. To consider any of it would bring thoughts of the finality of it all.

Given we didn't talk about that stuff, I guess I should have paid more attention to the risotto cooking process, and less on the risotto eating process. Because of this, her risotto is now sadly just a memory.

Chicken, pumpkin and spinach risotto is a simple dish on paper.

You've got pumpkin. But how long to soften it in the microwave?

You've got chicken stock. Reduced salt, or not? It was Campbell's Real liquid stock, I know, but salted?

The spinach. I got that one. Coles bagged baby spinach leaves, $5 pack I think.

And, of course, arborio rice. But which brand? And how much to cook it until sending up the cry around the house that dinner is ready? Al dente? Less? And what the fuck is al dente for arborio, anyway?

Peppers, salts, or other secret herbs and spices? I got nothing.

It's the little things, the choices and minutiae of process that add up to a final product. Some would describe those aspects as "the love" ingredient, I guess. Judy always cooked that risotto with a load of love heaped in, because she knew we all loved it so much.

I have tried a couple of times recently to re-create her simple masterpiece, but just like on Masterchef it was judged a so-so dish, and caned in scoring by the boys. No career as a chef for me, then. All of us have the end result of that signature meal firmly wedged in our memories, and would know it in an instant if we nailed it.

It has been precisely six months today since Judy left us. I miss her daily pearls of knowledge, and wisdom, and remembering. Sure, a lot of it dealt with mundane, but essential stuff, like always being on top of the paperwork that needs doing on the bench and knowing intuitively how to deal with it quickly, and reminding me that we had dinner with so-and-so tomorrow (and reminding me that she had already reminded me several times before).

I miss her daily laughter, and her zest for life, and always looking to the future.

I miss her positivity, and optimism.

And yes, I frivolously miss her risotto.

It is an amazing thing to me to think that it took the same length of time that it's now been since she's left, for her to descend from cooking the odd brilliantly tasty meal, through steady decline, to gone. The six months of moments in time before she died at the time felt like forever, but now they seem fleeting.

Life is short, people. Savour every mouth full of it. 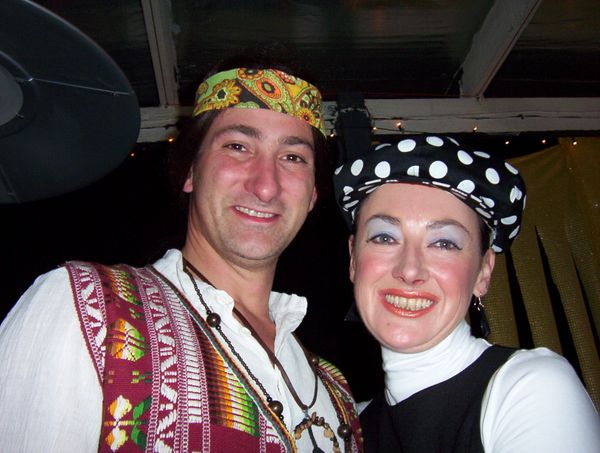 Happy 55th birthday, my super spunk. There is not a day passing that goes by escaping a moment of combined elation and ache in my heart.