The precious metal gold makes so many people happy. It has done so for millennia, through trinkets, teeth, trophies and plenty more.

It has so many uses. Jewelry, coins, bullion of value, guaranteeing paper currency, in electronics and computing, dentistry, aerospace, glass making, building and medicine.

Gold is a bio-compatible metal. That's a fancy way of saying we can ingest it, chomp on it and wear it, and it has absolutely zero impact on our bodies. Any wonder this beautiful metal grabs our attention as being something special.

It looks special, too. It's always shiny because pure 24 karat gold does not react with things in the air and tarnish. Alloys used to make harder and less pure "mostly gold" metals for jewelery do tarnish a bit, but it is always the things mixed in with the gold that get tarnished, not the gold itself.

In medicine it is used in so many ways.

Radioactive gold isotope can be implanted in tissues to serve as a radiation source in the treatment of certain cancers.

In days past it used to be used to treat arthritis, where gold salts were injected to reduce swelling, bone damage and to relieve joint pain and stiffness.

And intriguing to me, gold can be used to remedy a condition called lagophthalmos, which is an inability of a person to close their eyes completely. Amazingly, this condition can be treated by implanting small amounts of gold in the upper eyelids, which by adding weight allows the force of gravity to help an eyelid fully close. Amazing.

So it's not hard to see where the expression "good as gold" comes from.

Back in the time of the little baby Jesus, frankincense and myrrh were also held in high regard. That the wise magi from the East offered not only gold to that little bloke at a baby shower, but also these two precious things tells me they were truly wise.

In fighting cancer, there's a great set of primary drugs available, many of which are far more valuable than gold, measured both by dollars per ounce and by their cancer fighting ability. But in cancer treatment there is also huge room for so-called adjunctive therapies, and frankincense and myrrh are among them.

These other adjunctive drugs, lotions and potions are usually over-the-counter, or over-the-Internet, and can help with both cancer fighting, and also fighting the many side ills caused by cancer or its treatment.

You do need to be a bit careful with these other therapies, though.

A great deal of research needs to go into everything, and it is so important that our Dr Rob has a book on his shelf dedicated to the many thousands of additional things that can be used alongside regular cancer therapies. It lays out what each is, how it works, and importantly whether there are any interactions with his cancer fighting drugs.

Both prescription medicines and some over-the-counter supplements and medicines can have an impact on the effectiveness, or efficacy of many treatments.

St. John's Wort, a natural, non-prescription supplement for example, may alter the blood levels and effects of Afinitor the Mighty, one drug in Judy's current cocktail, and should definitely be avoided. The irony with St. John's Wort is it can be taken to naturally lift one out of mentally depressed states, which is highly likely if one has cancer.

We don't want any unforeseen, avoidable interactions messing things up.

Back to baby Jesus' gifts, frankincense reportedly offers a variety of health benefits, including helping relieve chronic stress and anxiety, reducing pain and inflammation, boosting immunity and even potentially helping to fight cancer.

It comes from the resin of the Boswellia tree, a native of India and Pakistan, which can grow with very little soil, and in dry and desolate conditions.

There are no known interactions with any other medicines, and it seems as safe as gold to use in and around your body.

A lot of ladies with metastasised breast cancer, including Judy, rub frankincense and myrrh oil on their sore spots and where their tumours are. Only a few ladies that Judy has come across haven't had it work to relieve pain, so that's a big endorsement. One lady is convinced that it is frankincense that has killed off some of her tumours, so we're semi-scientifically trying it out ourselves on a couple of Judy's skin lumps and bumps: frankincense for one, myrrh for one other, and the rest as a control in the experiment.

We got Judy some frankincense from an Internet-based supplier. It came in little dark brown gel capsules, and when cut open they reveal a rather unique smelling oil that shares similar traits to melaleuca (tea tree) oil. She uses the oil directly, or ingests the capsules.

The little baby Jesus would have been jealous, I'm sure, as he probably received a bunch of resin rocks in a box.

Myrrh is also a resin taken from a different, but related species of plant to frankincense, with this one coming from a family of small thorny trees native to the Arabian peninsula and eastern Africa.

Some say myrrh has a strong perfume with rather intoxicating qualities (as described in the Hebrew Bible, apparently in a few places). Our experience with the smell is that it could more be described as alluring, and more subtle than the Hebrew ancients described. It's like the smells of a forest in spring, like a freshly cut plum pudding tree, if such a thing existed, and quite a beautiful and unique smell. Judy referred to it as a far more sophisticated smell than vanilla, but similar.

In pharmacy, myrrh can be used as an antiseptic in mouthwashes or gargles, and vets have also used it in tinctures to help heal wounds in horses and other animals.

According to the Gospel of Mark, the little baby Jesus was offered a drink described as wine mingled with myrrh much later in life on the way to his date with a cross. An interesting offering. Maybe wine to dull the pain, and myrrh for fresh breath confidence? I'm tipping it didn't help the experience much.

So is there clinically measured effectiveness?

If anything helps keep my beautiful Judy on this planet one second longer then it's gotta be worth a go, so frankincense and myrrh get our tick of approval. Completing the trinity, I'm sure cold hard gold reserves to pay for any non-PBS[1] medicine that may be required one day won't hurt either.

The three wise men from the East, being so very wise were bang on with their gift choices we reckon.

A very merry Christmas to all. 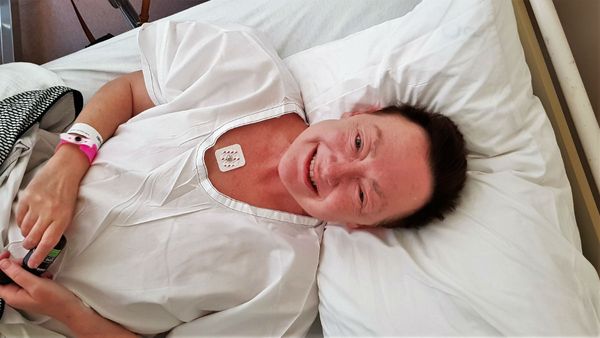 Serious health matters usually come as such a random thing. One minute you're living a (semi) normal life, then the next you've got your beautiful arse bared in a hospital gown being poked, prodded and methodically put back together.