It's a natural parental instinct to protect your children from the ills of the world. Where the world turns its ills towards the parent I guess there is a natural tendency to want to insulate them from it. Blogging all about it means no insulation, though, and with our our twin sons now young adults this has turned out to be a good thing.

I'm often asked how the boys are coping with their mum's illness. So how are they?

The first time round with this bloody disease eighteen years ago, our sons were super young and were blissfully unaware of the imminent danger that their mum faced at the time.

They were enjoying being read many stories by their grandma, sitting in a doctor's waiting room while their mum was having chemotherapy. At the time I think it was good for their heads to be so unaware, as it meant they could enjoy wide eyed early growing up without having any worries about how cruel this life caper can sometimes be. Back then, I also think it was great that their mum's cancer was beaten into retreat, as they continued to be blissfully unaware while growing up.

A couple of years after their mum's first brush with breast cancer saw them start their education just down the road at the local kindergarten.

Seb and Al are thinkers. While they can be boisterous, as all blokes can, when it comes to communication they're the sort to innately understand that the ratio of time spent talking and listening really should be the same as the ratio of your single mouth to your two ears.

As adults this communication trait is highly valued, and highly effective. After all, the best public speakers are exceptional listeners. And the best captains of industry. And the best sales people. And the best doctors.

Amazingly, in kindergarten some of their teachers thought that this listen far more than you speak meant our boys were slow, or that there might be something wrong with them. When one of the teachers raised this at some stage with Judy, effectively telling her that they were simple, Judy was able to replay for this so-called teacher all the things that our lads had done for the entire term prior, and much of it in great detail. At kinder they silently sponged up knowledge and experience, only talking when appropriate, and then hand-in-hand with their mum on the way home would blabber excitedly, telling her all about their exciting day.

There's definitely nothing wrong with being quiet, soulful and respectful.

So now many years later it comes as no surprise to us (and with much pride) that they both entered one of the top universities in the country and are diligently working towards twin science degrees.

And then cancer 2.0 arrived.

With Judy in hospital, I sat the boys down on the couch to explain what was happening. As you would expect, initially they looked surprised, shocked and scared. Really fucking bad news like that has a way of putting all three of those looks on your face at once.

It was probably identical to how Judy and I looked when we learned the news.

It was one of the hardest things I have had to do, but they made it much easier.

Before I started writing about Judy's cancer, the boys didn't talk much about the situation really. Sometimes Judy and I would head off to appointments, and on our return if there was good news to report we would share it gladly.

If the news wasn't so good, then it didn't seem right to bleat about it. The thing about cancer is that fighting it is generally a long and drawn out battle of micro wins and losses. So when things are not going the way you'd want, Dr Rob the oncologist is working on ways to make them go the way we want. While he does, a lot of silent hope ensues.

"I feel like it's opened up the lines of communication"
- Judy

Writing about Judy's cancer avoids the elephant in the room and encourages talk.

Guys can be really hard to talk to about emotionally confronting subjects. Then tip into the mix the parent/son dynamic, plus the small fact that their mum has an illness not curable with todays medicine.

Writing about it helps them ask so that they can understand.

After appointments they ask "How did you go?" They feel comfortable asking and also talking about it, whatever results from the question. It's an easy conversation. It's not awkward.

They know the medicines that Judy takes, and they know the side effects that flare from time to time. On Afinitor the Mighty and Aromasin the Amazing: "Do you just take a pill or what? So you can just take them and not have someone jabbing in your arm?"

They now ask lots of stuff, and not get sad. We're a team after all. And it does help both them and me greatly that mummy's smashing it of late, and things are quite stable.

There are random loads of clothes washing done.

There are random arms up-stretched for a hug when she walks past the couch.

There are sentences completed. Judy: "When oncologists smile..." Al: "...the whole world sighs with relief."

And there are spot hugs like from Seb saying "I hope Afinitor the Mighty does good stuff, mum."

And there is comfort. A few months ago, Judy was sitting in our bedroom, on the bed, sobbing uncontrollably about this fucking situation. Both boys entered, sat with her on the bed and just held her as a collective until the tears subsided.

So how are the boys? 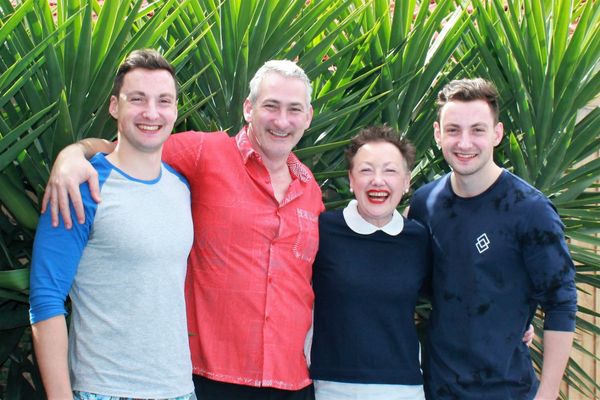 The greatest joys and pleasure are found in the simplest and most inexpensive of activities. This is hidden treasure, buried in plain sight right in front of us.