Judy's mammography clinician today did what her and hers always do. She tried to cram as much of Judy's boobs as she could in that machine that looks like a garbage compactor crossed with the creature that pestered Sigourney Weaver and friends in the Alien movie franchise.

Yes, OK, there may be a lack of raw material given her compact boobs, but that doesn't mean extra needs to be found from elsewhere to compensate. I was told that today our intrepid mammographer tried to squish boobs, ribs, parts of her neck and also ear lobes between the plates.

By the sound of it, I think Sigourney Weaver had a far better time fighting those acid-for-blood, tear-you-apart xenomorph aliens. At least her character Ripley was armed so she could defend herself.

"She nearly ripped my earrings out, I swear. It would have been more fun giving birth to the twins again. It was making my whole body hurt."

The only explanation that Judy could come up with for today was that she must have encountered a sadist.

Sadism is one explanation. Bad work is a less colourful, but equally likely alternative.

Judy always fronts up for every suggested poke, scan and squish at the scheduled date and time. She endures a lot at times, and the descriptions of many of these experiences make me wince and squirm, and wonder how she endures them so gracefully and well.

But a girl has limits.

"What's the things that have hurt me most in my life? Giving birth. The boob lumpectomy years ago. The biopsy of my neck thing. And today."

These mammograms seemed superfluous right from the metastatic, it's-spread, oh fuck get-go. Given all the other more regular radiological high-tech scanning of her by her oncologist Dr Rob, they seems super superfluous now, nearly a couple of years on.

In the context of stage four cancer, the only time anything nasty growing again in a boob would result in getting rid of that something in said boob, or the boob itself, would be if that something were growing out of control and not responding to the treatment she's already receiving for the rest of her spread cancer. That spread cancer is still breast cancer, after all. It's just not growing in a breast.

And she doesn't need a mammogram to tell if something were there. For that we can rely on the far more frequent CT scans ordered up by Dr Rob. And frankly, given the lack of raw Judy boob material, Blind Freddy could tell if significant lumps and bumps had popped up in her bosom anyway.

(Blind Freddy may like to have a grab, but back off, bloke. Them boobs are only for my good self, and the odd doctor.)

If you've had a boob job, by the way, then you can't have a mammogram. It doesn't work, and it would be downright dangerous given the severity of squishing. (This would be especially so if the boob screw alien contraption is operated by Judy's sadist from today.) Ultrasound is the tool of choice for these ladies, which is a far more gentler alternative. It may be gentler, but it's apparently not as clinically effective, so if you're contemplating a boob job to get out of mammograms, maybe think twice.

Dr John, the initiator of these mammograms, holds a special place in Judy's heart. After all, he was the right bloke right at the start, decades ago, who has seen through the entirety of her cancer journey.

Catching up with Dr John started out as an almost daily occurrence after surgery, but in time these were extended to three monthly, then six monthly after a while, then ultimately annually. The purpose was to catch any recurrence should that occur, and the principal checks were a mammogram and lump hunt.

I think it a cruel twist that all this regular checking, pain, indignity and endurance in the end was for naught, as Dr John's methods didn't catch it recurring.

And now we've found that it has recurred, with a vengeance, surely continuing to check for recurrence is useless.

Most of Judy's visits with Dr John are catching up. Asking how his kids are. Asking how the latest holiday went. Reminiscing about the photos of his African adventure, still on his walls after so many years. Having a bloody good chat. There's not much generalist doctoring that goes on.

Dr John, really Mr John, is a specialist surgeon. And Dr Rob is an oncologist. Judy needs holistic cancer doctoring far more than she does a specialist scalpel swashbuckler these days, so Dr Rob Top Trumps him there.

Dr John calls her "A little ray of sunshine".
Amusingly, with tongue in cheek, her old gyno Dr Janet called her "A little holy terror".[1]
Shades of Dr Jekyll and Mrs Hyde...

I think Judy will likely continue to see Dr John, despite mammograms being reasonably (Jekyll), and no-fucking-way definitely (Hyde) refused. I think she considers herself of value to his life in some way, as he has been to hers. She is genuinely involved with the lives of others, and is one of very few patients who asks after their doctor's wellbeing, and genuinely give a shit about their caregiver. He seems to love that she does.

It is also a very long relationship that they share, and a brilliant relationship that mostly has been shared cancer free. To end that over the small matter of alien boob compaction technology, a sadist and redundant doctoring seems somehow wrong.

She'll see him, but he'll have to make do without any boob pictures. Maybe he can borrow some from Dr Rob.

And I'm perfectly capable of fumbling and feeling her boobs up, too, but given their long relationship I'm happy to still give him that. 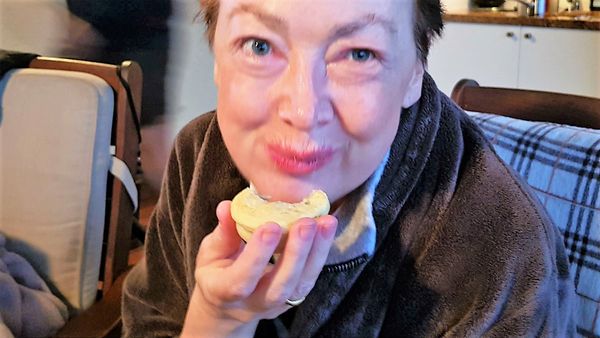 Hospital sandwiches. They're just ambrosial. Ooh, that egg and lettuce. It's unbelievable that the first snack you're gifted as a post-surgery breakfast could possibly trump a party pie.