When a treatment option for Judy changes it is never a relaxed time.

This is especially so, we've learned, when change is accompanied by treating tubes being gently stabbed through her beautiful brain, causing significant flow-on anxiety.

So far, change to date has without exception been accompanied by hand wringing, as change is initiated by some treatment not working or stopping working, then involves waiting to see how the next treatment works.

Change right now means a return to chemotherapy for Judy.

There have been a few changes over the last couple of years, owing to hormone treatment options seeming not to be that effective for her. Some ladies get many years service out of some hormone treatments with metastatic breast cancer, so that's been super disappointing for us.

Afinitor the Mighty and Aromasin the Amazing was a combination hormone therapy that Judy stopped taking after it was discovered that nasties were growing in her head, and her cancer antigen test marker number started climbing, reaching a higher number than when she started this so-called journey two years ago. Her cancer got wise to the effect of these drugs, as seems to happen with most treatments in time, so that ended their nine month reign.

We read a lot from Dr Rob's demeanour.

When Dr Rob is happy and chatty we know that the fight is a fair fight being fought well. On the whole, humans are quite good at reading a face, but with Dr Rob, honestly Blind Freddy could tell you whether things are good or need more work.

To summarise Dr Rob's non-verbal chit-chat, his demeanour of late, I think things with this change to chemotherapy are most likely good, but it's a bit too early to tell. He's being careful, cautious, methodical, exhaustive and explaining absolutely everything. We do feel his confidence, though, and that is filling us with confidence, too.

Judy's new world is the world of a couple of chemotherapy drugs. Abraxane, also known as protein-bound paclitaxel, for whole-body chemo, assisted by methotrexate for the cerebrospinal fluid in her head, which also trickles down her spine. I've given these two drugs the nicknames "Paki Taxi" and "Metho T-Rex".

I have been giving all of these weird named drugs a nickname in an attempt to recall their actual name, which usually works well, despite not really wanting to know their names in the first place. (Why do drug companies give their creations names that are so hard to get your tongue around, hence are so easy to forget?)

Alternative nicknames considered for Abraxane were Taxiride, 2Pac and TaxPack, as not much could be done with the brand name "Abraxane", unlike its drug name "protein-bound paclitaxel", which offered a world of possibility.

Nurse Ria, an angel in Day Oncology at the hospital, cemented the Paki Taxi moniker with repeated chuckling and head shaking when I tried it on. Paki Taxi it is.

And after much musing, I settled on "Metho T-Rex" for methotrexate. That drug could be considered a post-war child, being created just after World War Two in 1947, and it was involved in the first cures seen of a metastatic cancer around the mid-1950s. Coincidentally, the mid-50s also saw the Japanese legend Godzilla created. His creator meant Godzilla to be a metaphor for nuclear war with the bombings of Nagasaki and Hiroshima still fresh, hence the improbable scorched earth seen in films wherever he ravaged. Although supposed to be a sea monster, I think he looks like a chubby Tyrannosaurus Rex. Be afraid, cancer. Metho T-Rex is coming.

These drugs have been around for years, and that's a good thing. That means there is proven effectiveness, and a good sized body of knowledge behind them both in terms of effect, and side effect.

We've been gifted some wonderfully encouraging news about Metho T-Rex so far from Dr Rob, with a steadily decreasing number of "anomalous" cells being seen in cerebrospinal fluid samples. These samples have been sucked gently out of Judy's beautiful brain via her Ommaya reservour just prior to more tiny amounts of methotrexate being put back in to do what it does so well.

A decrease of that nasty shit is some wonderfully relieving shit to hear.

For whole-body chemo though, Paki Taxi is still in the early days, given she's only had a few lots run through so far. It's going to be a while until its effects will be known for sure.

Normally, Dr Rob likes to give whole-body chemotherapy drugs like Paki Taxi weekly, and test progress every few. An alternative is to give larger doses less frequently, but he told us that using that approach usually results in more pronounced side effects for a roughly equivalent impact on cancer. And one of the seemingly ubiquitous side effects of chemotherapy is feeling very, very tired, which can seriously get in the way of feeling like you're living a normal (but abnormal) life, so a bigger dose means a bigger tired.

On living life, he also likes to balance treatment with getting on with all sorts of wonderful living opportunities, and sometimes that means compromise.

I got to spend time with the love of my life sitting in paradise in an over-water bungalow in a superb resort in the Maldives, splashing and feasting and living and forgetting, and feeling glorious smooth sand between our toes.

We took off to celebrate my fiftieth birthday, but that was really the excuse. Many years ago we wanted to honeymoon in this wonderful republic of twelve hundred tiny idyllic islands, but were unable to do so. Given we still feel like we're just married after these twenty two short years, let's just say we finally had that honeymoon trip now.

Paki Taxi kept the meter running while Judy had a break, and now we're back to continue the ride. Let's see how he completes the trip.

My God we had a wonderful honeymoon. A heartfelt thank you, Dr Rob.

"Don't cry because it's over. Smile because it happened."
- Dr Seuss 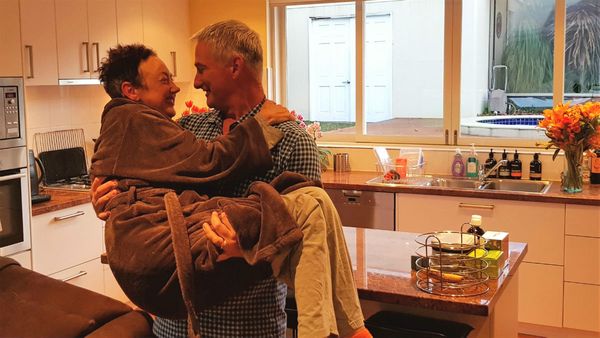 A bizarre twenty four hours became the catalyst for a bit more certainty about why Princess Wobbly Legs has been so wobbly.