In the midst of dealing with her recent cerebrospinal fluid brain-protection-system palava, Judy took pause to address one of the non-critical aspects of having cancer. She elected to have her skin lump-and-bump tumours treated with radiation therapy.

Staying alive is great, but staying alive with good quality of life is paramount. Both physically and mentally.

The lumps have been becoming uncomfortable over many months, and painful at times, so however fond of them we've been in the past, it was definitely time to do something about them, especially as doing something meant something that is simple and non-invasive.

"Fondness" is an interesting word to use when describing cancer. We were fond of them only from the point of view that the lumps afforded both us and Dr Rob a scan-free indication as to how her cancer may be progressing: Larger, smaller bumps. Flatter bumps, harder bumps. As Judy's treatment was administered, these lumps, being breast cancer that has spread, would be impacted too, and being able to be physically felt to assess impact reduced the need for radiological scanning.

None of the treatments to date have ever got rid of them, though.

Judy's CA 15-3 tumour marker (an indicator of cancer growth) had been increasing over recent months without obvious reason, too, so stopping the lumps and bumps growing occurred to us a good thing to do, as they may have been partly to blame.

My remark of "took pause" to address them is also interesting. Taking pause really manifested as Judy losing her shit, because on at least two occasions over the many months preceeding she had expressed a desire to have them treated with radiotherapy to be rid of them, with the support of Dr Rob. In all prior expressions her wishes had been swept away with dismissal, wait-and-see, we've got bigger fish to fry, "what does Dr Rob think", etc.

So last Friday we busted her out of one hospital, only to head down the road to another hospital to finally do something about them with some quality snap-crack-pop radiotherapy.

Earlier that week, Dr Sasha finally grabbed his Texta marker pen, some technician friends and some very fine scanning machinery produced by the good people at General Electric, and planned out this simple procedure.

Radiotherapy these days is routinely high tech and precise. The last time Judy had some fired at her head there was much scanning and planning, Hannibal Lecter mask preparing, triangulating, calculating a boat load of angles, double checking, and finally three radiotherapy sessions involved over three weeks. It didn't save the sight in one of her eyes, but it did give that ol' tumour a pounding it never forgot, whilst not damaging much else.

The time before that, way back when Judy's doctors were addressing early breast cancer, they used three tatoos to re-align their intrument almost perfectly every time. (Radiotherapists don't use tatoos these days, though, given medical technology advances.)

Shooting at a tumour in your head, near your brain does require finesse to get the job done without collateral damage. after all, they're shooting radiation right near your brain, so they'd want to get their angles right. Even repeat radiotherapy re-aligned with tatoos could be described as finesse in avoiding unnecessary damage, given breasts are so close to a lot of key body bits.

But shooting at some skin lumps? That would seem to me to be like shooting fish in a barrel for a nuke doctor.

I understand the only reason a CT scan was required this time was to assess the depth and get an accurate size of the little lump buggers. Most of the planning work this time was done with touch and a Texta. 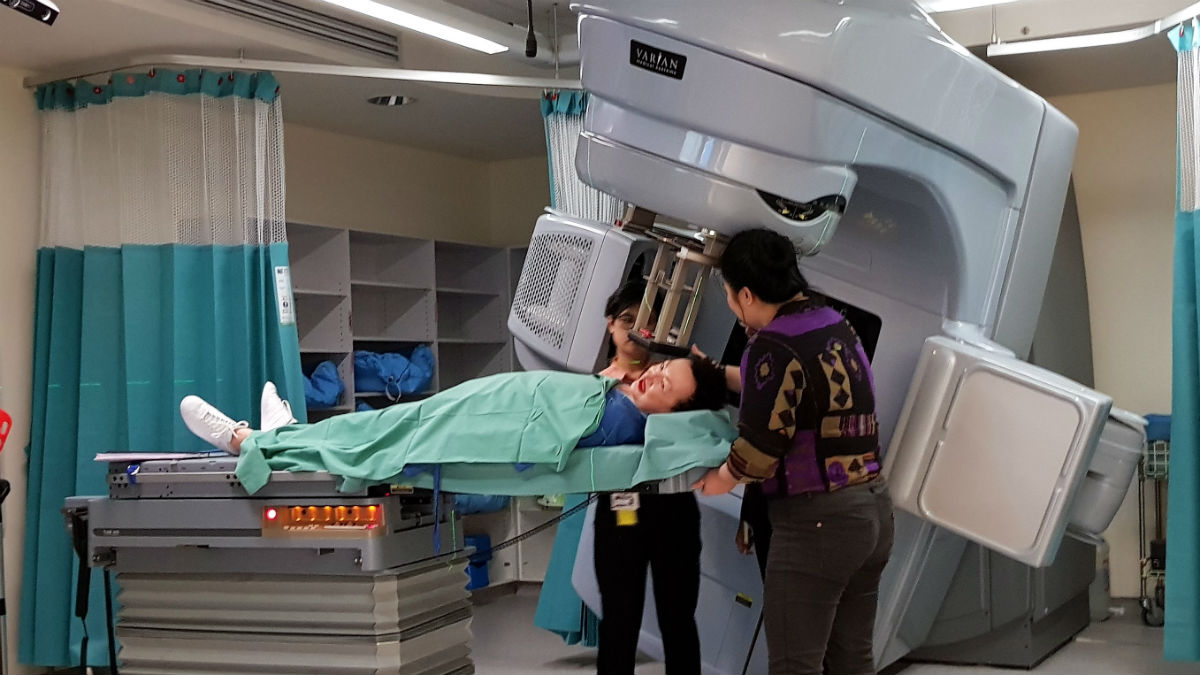 Dr Sasha, Judy's radiotherapist looks good, and keeps himself tidy. Judy and I are sure he appreciates a designer label. I've likened him in my head to the highly evolved cat from the TV science fiction comedy series Red Dwarf, who was always designer dressed and found it impossible to pass a mirror without self-admiration. Sasha is nowhere near that camp and superficial, so my brain expresses extreme mental poetic licence with the similarity.

Highly amusing to me, in a subliminal appeal by Judy, she went to the meeting that finally saw these lumps and bumps seen to in an ensemble comprising Polo Ralph Lauren jacket and shirt, Hermès belt, and Louis Vuitton handbag, as well as her finest and famous full made up face, Lancôme 183N red lips and a hint of Gaultier Classique. Unseen, Cavin Klein knickers supported.

I thought it a good plan, to subliminally appeal to his designer side, but convincing Dr Sasha to go for this radiotherapy needed far more than subliminal subtlety. Guess he's not as easily swayed as the Red Dwarf cat, after all.

"I can't believe I got dressed up for this! I would never dress up like this for Dr Rob."
- Judy

In the end, it was exasperation and frustration that got the job done, and questioning why radiotherapy and other treatments couldn't be considered at the same time.

Well fuck that, said Judy, in a beautiful display of non-verbal communication, and perfectly timed silences.

I don't think I have ever seen anyone say "fuck that" as as well without uttering a single word.

Finally getting to nuke those sons of bitches has done a world of good for her quality of life, in a large part because it has rid her of frustration over inaction. 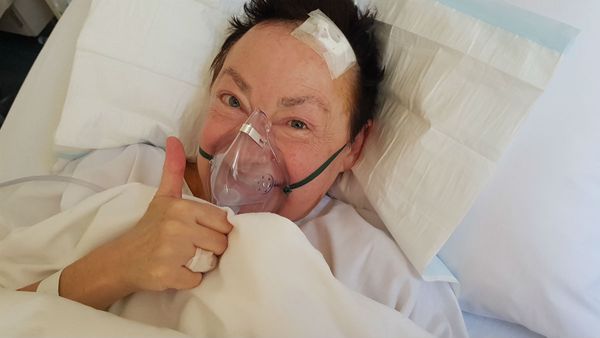 Dr Gavin and his Team Neuro did some surgery today to lay the foundations to fight cancer in Judy's cerebrospinal fluid.