A week dump. Five days in five paragraphs, with grammar be damned. It's a week off treatment for Judy, so I'm going to try and take a week off of real proper good writing.

Monday, I woke princess up uncharacteristically early to start the week off at 9 AM to prepare. There was a relatively early visit from Jane coming to have a natter and drop off some tasty treats. Then a visit from the office coppers, so the street was littered with cop cars, including ones in crime scene investigation livery. At the tail end a Pal Care nurse visited, who had to wade through cop cars outside and a sea of uniforms inside, expecting to find police tape everywhere. She was relieved to see Judy alive. We gave her an update about Judy's medication changes, and had a chat about our recent holiday (last time we saw this nurse she'd got the dump about the Maldives trip before this last one, and couldn't believe we'd been on another big holiday a month later). Blood pressure great, so we gloated about steadily putting on weight last week... Later that day, Dr Hayley her podiatrist gave her tootsies a twinkling late afternoon, so with a spring in her shuffling step we celebrated weight gains much further with a McDonald's craving sorted.

Tuesday, Steve cleaned up jobs. First up, made sure the health insurance continues uninterrupted after being exited as redundant by my employer a while back (been too busy to go through the seven stages of grieving to worry about them... I'll get around to it). Arranged an appointment at the optometrist to update my prescription so the laptop screen is less blurry when writing blog stories. Damn appointment will be next week, so good thing this week is a week off writing good... Called Samsung to work through annoying audio skipping on the TV's TenPlay app, which annoys princess while she watches her stories. We can't have that. After this full day, on to a dinner of Coutsy's gifted meatballs received yesterday, and opened a bottle of twenty-something year old Grange Hermitage to accompany ... because we've never had meatballs and Grange (and Coutsy's meatballs are brilliant). Having now experienced this combo, I highly recommend it, if you've a spare Tuesday.

Wednesday, get Judy's car serviced. I'm capable of changing oil, throwing in new filters, doing computer diagnostics, putting nice smelling additive in the washer fluid, staring under the hood for bad signs and giving it a wash, but I don't have a dealer's stamp for the book to keep resale value. Plus honestly I really can't be arsed at the moment, as I've bigger fish to hammer. Anyway, it's a week off... Later in the day, there was servicing for princess at the dentist. "I don't really like going to the dentist." (no shit, I say...) Then she laments, "He always gets into me for not brushing my teeth that well." This time he didn't. Rather he made sure he understood her current situation and treatment, and gently cleaned and inspected and explained and advised. She's definitely got bigger fish (much bigger than anyone's) to deal with at the moment than teeth, but getting them checked was a good job done, as cancer fighting drugs usually knock the crap out of your clackers... There were a few cognitive issues apparent today, God damn it, and Judy went all super droopy tired both before and after the dentist. Because brain radiotherapy? At face value, highly likely, as it was a different kind of droopy than when princess went droopy loopy, so I was more relaxed (like a parent knowing the difference between baby cry types). Then I noticed she had skipped her corticosteroid this morning with it still on the coffee table, and that can also make you go weak, so maybe it was a bit of column A and column B. Pill taken, she was in bed by 8 PM with no dinner. I worried about that.

Thursday saw a good sized sleep in, interrupted by me (the "bastard", delivered by princess with a grin) waking her up at 2 PM. After skipping dinner last night, Princess Beefcake took to the scales for the daily weigh in and took a step back to 45.7 kg, dropping more than a keg for the last day. The Biggest Loser contestants on telly would kill for drops like that, but I responded by taking her out later for giros meat, dim sims, potato cakes and chips. She hoovered the lot... My sister Em visited, just to say g'day... I monitored every pill taken during the day like a hawk to make sure they were taken. We fucked up Ollie olanzapine, (well, Jude did), by swallowing him not sucking, but at least he got into her. Later, she was in bed at 11:30 PM ready for a big sleep to prepare for visits tomorrow... Then up at 1 AM for a second Tim Tam Temazepam sleeping pill and some Chiobani Apple Crisp Twist yoghurt... Then up at 2:30 AM needing her feet made warmer and the electric blanket on full. Then at 3:30 AM, when I was sure I was all clear for my bed time... Ah, yeah, nah. Princess squeezed in one more Temazepam before I could hit the sheets with confidence. I hit solidly, knowing that a pissed off lion would have been pacified by three of those little pills.

Friday's jump on the scales revealed a jump back up to 47 kg. What the? She didn't even eat 1.3 kg, did she? Whatever. The number's much higher than yesterday, so a big win. Despite a massive gain for today, the trend line over time has continued a slow drift down this week, giving up the nice gains gloated about from last week. More eating stretch goals required... Today it was a relatively early wake up at 11:30 AM to prep for visitors, and per schedule, at 12:30 PM a wall of sound descended in the form of Alana and Pinnie brilliantly bearing well stuffed baguettes and wicked cannoli as if psychic. In an effort to further reverse the weight trend, we made it to our every Friday out dinner at Nonna's Italian down the road for tartare sauce accompanied by deep fried calamari, chips and salad for Judy, followed by strawberries and whipped cream. It was steadily hoovered. Mentally toting up breakfast, and baguettes, and cannoli, and calamari supporting the tartare, plus desert, plus later, chocolate, and a cheesecake supper it is quite possible that princess did tuck away 1.3 kg of food today. Tomorrow will tell. 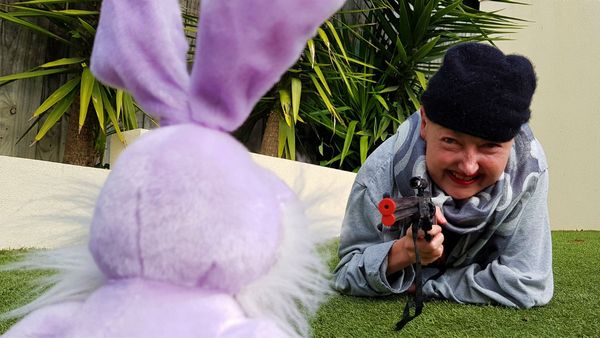 When we were young, carefree, and cancer free, Jude and I used to root like rabbits when afforded any accommodating circumstance that would allow it, or that we could engineer to allow it.