It's true. Friday the 13th is a thing. And it sucked big time this time.

It started its mischief early.

I needed to get up nice and early, so late Thursday night, well, actually very early Friday in the wee hours, I sent myself off to bed and left Judy in the Hutch[1] outside mopping up the last throes of a favourite TV soap. It was another ten minutes to go of the show, so I felt all was good to lead the advance party to good night.

What ensued was a six hour long ordeal for Judy, trying in vain to get herself to bed.

Jude's been taking dexamethasone steroids to try and combat post-surgical swelling, and also the cancer-induced blocked-up swelling in general on her brain. On that front, the steroids are a good thing. But where they're not so good is also making her super weak in the legs.

Add in some tiredness, residual wobbliness, a sprinkling of oxycodone, a couple of Tim Tam temazepams and she turned off the telly, got up, and promptly slumped in a controlled crash to the floor, and then couldn't get up.

By this stage, I'm all tucked up, fast asleep.

After many hours, struggling, half sleeping, sobbing, cursing a flat phone battery, sleeping some more, and crashing a couple of times, eventually she managed to crawl her way to the house, inch by inch.

When I got up at 6:30AM, I found her torso inside the side door, legs outside across the threshold, door wide open, blood all over her nose, and her freezing cold.

Not a good start to Friday the 13th.

At least it wasn't raining.

Ruling out whether an ambulance was required, I cleaned her up, dressed her obvious still bleeding nose wound, checked for others everywhere, then got her into bed for a well deserved sleep before Day Oncology and chemo that afternoon.

I will never let that happen again.

I will stay up as late as needed to make sure she is safe.

The dexamethasone steroids make it hard to sleep, and hence make it easy to stay up very late. Getting to sleep requires eventually feeling tired, and usually some chemical assistance, so I should have seen that coming.

After a well deserved half day snooze in a bed with the electric blanket on full for the first hour, Judy and I set off for head chemo #5.

What more could possibly go wrong?

A guest nurse was in Day Oncology this day. She wasn't part of the usual Day Onc. team, rather was there to introduce herself to Judy, as part of an extended nursing team there to help her out.

Fascinating to this nurse was the administering of chemo-to-the-brain via Judy's Ommaya reservour installed in her head, as she'd never seen it done before. She was an oncology nurse in years past, but the hospital where she worked didn't do that kind of thing. With our consent, she stayed for the procedure of giving chemo that way.

Being Friday the 13th, we should have said no.

She hovered. She cloyed. She asked "Are you alright, Judy?" in a Yorkshire accent over and over. She stroked Judy's hand, virtually pushing me out of the way. She got in the way. She hovered over sterile bits and pieces. She banged a mobile table laden with Dr Rob's stuff into Judy's legs. She really tried hard to be a part of it all, but really, she shouldn't have.

She should have sat in the corner and just observed, as we'd agreed to.

"I've never come that close to wanting to tell someone to fuck off before."
- Judy

To add to the hovering and cloying, much of what came out of her mouth was treating us like we'd never seen this stuff done before. This recent chemo business is not our first rodeo, after all. Judy's been intimately involved, and I have been at her side for almost all of them. This was now routine head chemo into her brain, and there have been countless other chemo infusions in Judy's arm. Plus plenty she's tucked away in many years in the past.

As expected, we finished off Friday the 13th with me accidentally elbowing Judy in her injured nose in my sleep.

Winner of a day, really. 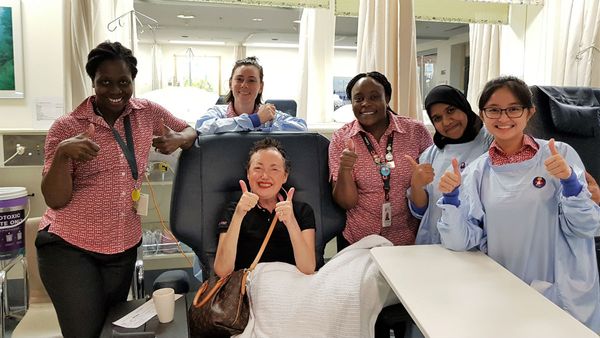 It's impossible to foresee unexpected twists and turns with cancer, so one just has to book holidays, and look forward to them. Dr Rob will make them happen if at all possible.