The last cabin door is now closed, and I imagine a cabin crew collective has just breathed a huge collective last deep breath of Australian air to make them feel stronger and more confident for the journey ahead.

It's a deep breath acknowledging that they may be about to be proper fucked by an aircraft full of needy travelling public, for what will be approaching twenty hours duty. Eventually they will claim a Chardy in hand in the hotel, or at home in London if they live there, and it will be bloody well earned either way.

They have no idea what is about to unfold. Drama? Emergencies? Maybe both. Probably neither. Whatever might happen they are trained and ready for it.

The things they do know for certain is that the average non-stop run on this flight from Perth to London in their Boeing 787 is seventeen hours and change, and that they will travel over thirteen countries, and not get much quality rest in the process. But that's just another day for them in their aluminium and carbon composite home away from home.

It's a big adventure for me.

I'm by myself, snuggling in to a pointy-end seat with a bloody good bubbly in hand.

Still, even though I'm comfy in row three, I'm apprehensive, too.

For many years, Judy breathed the same flight attendant pre-departure deep breath as this crew, but on a way smaller Ansett Airlines domestic scale. It was a similar thing to long haul flying, with similar execution, sights, smells, surrounds and training, but with a lot of the job done in a compressed timescale, over many more sectors, adding to the number of pre-flight apprehensive moments.

These days in a domestic economy seat you get a cookie tossed at you in a cardboard box, and a bottle of water if you're lucky, so the joke hasn't stood the test of time. Way back when, Judy and her colleagues used to do a hot meal and grog for the whole cabin on a 50 minute Melbourne to Launceston, adding to apprehensive pre-flight. Military precision was required. This she once described to me as "plate chucking", given the lack of time to distribute food and booze, with trolleys heaved up "hill" on ascent, and then the rush and collect the mess left over down "hill" on descent a matter of minutes later, only to finally strap in to the crew seats exhausted at a bumpy-wobbly 5,000 feet or so on final approach. In contrast, on a long haul flight, the travelling public are already well through their first wee and movie at 30-something thousand feet before dinner even commences.

Setting aside cookie and drinkie distribution, Judy reinforced with me on many occasions, that the main reason there are cabin crew at all in an aircraft is to have trained people (and trained specifically on the aircraft type) who are always prepared to get everyone's arses out of that aircraft in under ninety seconds using only half the doors, should everything about that given flight suddenly turn to custard.

Their job is about way more than the service that you see. It strikes me as sharing similar characteristics to an iceberg: A small proportion is wonderfully, and breathtakingly visible, yet the far greater and vast supporting mass below the surface is thankfully almost never seen.

Below the surface are things like instantly knowing where the Halon extinguishers are, and smoke hoods and medical kits. Knowing the right commands to yell in an emergency, and how loud and long and often to yell them. Things like delivering the odd baby, or urging a divert because of a suspected heart attack. Securing discretely and respectfully someone who has died. Deploying slide rafts safely, and getting all deplaned and aboard quickly, should the air frame miraculously survive the water "landing". Identifying passengers on walk-through and boarding that could help in an emergency, or those that would likely hinder one, because attitude, age, ability or alcohol. And knowing how to defend not only themselves, but others.

Basically, when in the sky with you, your flight crew are ambulance officers, police officers, and also firefighters if need be, not wait staff.

I think it natural they'd be a little apprehensive, sat backward after their safety briefing and walk-through, looking at everyone, from their view strapped into a crew seat harness, (with those not nattering with a crew mate) going through mental checklists of their company and craft type safety procedures silently while the aircraft taxis from apron to runway. I think it natural for them to muse about the the guy in 7F who aggressively complained about the oppressive temperature in the cabin on walk-through, whilst not a single other soul had, and weigh the possibility that he might be a total cockhead, or that he might have bird flu.

In comparison, the apprehension I'm feeling at the start of this flight seems a bit silly, but it stems from basically the same thing: hoping I am prepared for the unexpected ahead. Like the flight crew, I'm trying to wear a smile all the while.

I am travelling to the other side of the planet, with a loose agenda, on my own for the very first time on an international holiday by myself. Greece primarily, and other bits of Europe, probably. Maybe.

Yeah, sure I know where I'm staying for a little while when I arrive, and I have a car. Booking.com confirmed those bits. That will likely go to plan, but plenty more is also totally unplanned with a high potential for both fuck up and delight.

I'm quite looking forward to the unplanned bits.

A bit of random never hurt anyone.

Well, mostly. Unless it involves getting cancer.

In life sometimes things do go to plan, but like flight crew, being mentally prepared for the unexpected is advisable. Sure, I schedule work meetings to achieve an agenda, with outcomes desired, and discovery required carefully thought through, but then I get hit at the last minute by a customer wanting to talk about something else entirely. Or I plan investment strategies with the best advice of top financial planners only to have the share market go tits-up because whatever, or house prices fall because of something else, and I'm left with the shock realisation that the strategy was good, but life's unknowns have kicked me hard in the jewels without warning. And it's kicked yours at times, too, I'm guessing.

Or conversely, we can get unexpectedly and unbelievably very lucky.

And yes, we can plan getaways to within an inch, but random stuff always happens. A flight is delayed resulting in a missed connection, and we get pissed off, or you're unceremoniously dumped from a business class booking to economy. We break a bone. A hotel messes up a booking. We lose a Passport. We get Delhi belly.

It makes the heavy planning look a bit silly at times.

Or we unexpectedly get upgraded to first class. Or maybe we bump into someone we know, or get to know, and hang out in a country longer than expected, having a ball.

I guess I'm doing this trip in this largely unplanned way because in some ways I want life to be unpredictable, and unexpected, and travelling with a rough agenda seems like a great way to achieve that. In a twisted way it may be that my brain wants a return to the unpredictable time when Judy was slipping ever so slowly from my loving embrace. That it was a slow slip was a brilliant gift of medical science.

During that time, Jude and I got up to all sorts of fun, and we did several trips abroad with only a vague idea, flights and a train ticket. At the time we didn't draw any connection between that style of travelling and her chaotic health situation, though.

I'm thinking that a bit of chaos travelling might be good for my head.

I'm reminded also of Dr Rob's doctoring style. He planned for the best, but was prepared for the chaotic worst. Every scan and test was done with precision to measure her body's chaos. Every consultation, or hospital hallway discussion, or phone call with him saw probabilities weighed and possibilities contemplated, through furrowed brow, most done during unspoken, yet telling pauses. Then when he spoke, his words were considered, and careful, and factual, and educating, yet still encouraging, without being contritely positive, or unnecessarily polishing one's turds, so to speak.

Let's not mince words: he knew Jude was in the shit. How far in the shit was up for brow-furrowing consideration with respect to the way to doctor ahead. Yet, despite the shit, he never let it get in the way of a bloody good life. He controlled chaos for as long as he could, to prolong quality of life.

I love him for that.

I bloody love you, Dr Rob.

Chaos is life, and life is for living. So let it live out, but live it out brilliantly, in spite of the chaos. Judy and I did.

I can't bring her back, but I can try to bring back that feeling of loss of control, just like life seemed in the last of her six months. That time was brilliant, but oh, so awful, too. We did so much, and loved so much, and shared so much of the randomness of life. It was like our previous twenty-five odd years concentrated, magnified and amplified in a crescendo of sorts, both wonderful and shocking.

I'll let you know, I guess.

I ache at losing Judy every day. And I ache every day for our sons, who I know ache unbelievably at losing her too. Far too soon. My aching is both with them, and also because they're aching; an ache of a parent, planning and wishing everything perfect, but being unable to deliver, because life.

Life is in no way perfect, nor is it fair, nor is it controllable. Life is what it randomly is. We are sometimes left wanting, hoping and needing, and we pick up the pieces. We have to. It's mostly what we, as humans do.

Whatever happens on this trip, like everyday life, whether wonderful, or shitty, my princess will be looking over my shoulder whispering advice, and wishing me well. She'll be travelling with me, topping up her Lancôme 183N red 'lippy' before touchdown, painting her brave and vibrant and smiling, ex. flight attendant face, ready for anything, empowering me to be ready for the same. On this trip, we'll be travelling to places, both physically and mentally that we both haven't been, so I'm comforted that I won't really be alone.

Checking out the movie choices aboard whilst taxiing to the runway, then snapping a selfie for this story, I notice a smiling flight attendant strapped into her crew seat silently looking back at me, yet through me with a distant look. Looking back at her, I'm distracted by thoughts of the journey in front of me, and what it will bring.

I return her smile.

I'm urging the seventeen hours of flight time ahead, and 500 hours of Europe time following it to give me all its got, comfortable or not, expected or not, knowing that my princess will somehow be riding shotgun from afar right with me.

I hope we have a ball.

I hated booking a "table for one". Making the telephone call reinforced that my Jude is gone, and that she should be experiencing with me all that these wonderful Greeks have to offer the world. 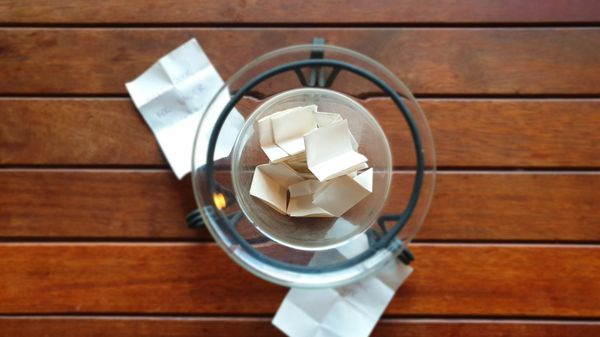 So many things around the house evoke so many memories, thoughts and feelings. The memories are cool, the thoughts are special, but it is hard to describe how precious the feelings are.