My princess had a few idiosyncrasies.

They were wonderful, mostly brilliant idiosyncrasies, with only some making me wish those things a bit less quirky.

Mine were more the likes of maintaining a "floordrobe", by leaving clothes at the end of the bed and not putting them in the washing basket, swearing to myself I'd wear them again before they needed a wash (and I did, honest!). At times the stash of re-wearables got a bit out of control, dominating the trunk at the end of the bed and spilling onto the floor. It was a system, keeping the lightly soiled clothes apart from the fresh and hung stuff. I'd just pick and choose, and step around the over-spill for days with my brain actually thinking I was being a good boy generating less washing. Yeah, nah, apparently not good.

And leaving puddles on the kitchen bench after rinsing things? "Oh, for fucks sake! Wet my bloody sleeve in Lake Saint Stevie again."

Plus I do seem to play with a lot of stuff around the house and intentionally leave it where it is instead of tidying it away at the end of each day. It's not being messy in my head, rather it ensures I won't forget where I put something, or won't mess a project up by shoving it in a cupboard. Yeah, nah again. I blame mum for that one, probably being a bit too free-expression-no-repression with me. She must have tolerated stepping on Lego, even though that hurts more than childbirth.

Actually, I am a bit messy.

And I'm generally slow at completing things because I'm of perfectionist personality, with stuff needing to be done right, not fast. I ain't slap-dash, and swell with pride by getting a job done right. Most deadlines in life are artificially imposed, so bending timelines to do things properly is where my behaviour lands. Where the deadlines are real, I just pull all-nighters to get it done right, sacrificing sleep to assure a good outcome. Yeah, nah. That's not really how one should go about deadline management.

All that didn't bother me, but at times it did boil princess's piss. I'd give my very best "I'm adorable" face in reply to being called out on anything being overly unacceptable on any given day, and would punctuate it out-loud with a "but I'm cute, yes?", which usually got a chuckle and a cuddle. It was usually an immediate cuddle, but sometimes it was a little more delayed, usually after one of my more extreme idiosyncratic moments had caused her face to pull one of those "what the fuck have you been smoking?" faces.

In contrast, Jude's idiosyncrasies were almost all gorgeous, and needed no defence nor deflection whatsoever.

I honestly feel like a bit of a dick over some of mine, given hers were mostly gorgeous. Still, I am who I am, but.

None of our less than positive quirks interfered with the love that our souls got on with. Many of mine were opportunities for improvement, I'll grant you, but they did surprise and delight at times, like when I'd quit floordrobing for a week or two.

To describe Jude's idiosyncrasies as almost all gorgeous might sound like I'm being over charitable, and blowing sunshine up her beautiful arse. We all have certain characteristics that make us seemingly less than perfect when held up to certain standards, but idiosyncrasies also include other characteristics that make us uniquely wonderful. It's easy to be self-critical, with me not thinking about any of my good quirks right now, but I'm sure Jude would have gushed positively about them.

Aside from a bit of snoring and being an over-stickler for timeliness, in my eyes Judy was damn near perfect.

On timeliness, if I was faffing about and not ready to the second to head out to chemotherapy or a medical appointment at her calculated departure time, she'd grumpily grab car keys, I'd hear the side gate crash shut with a jump, and I'd run full speed from the bedroom where I'd been grabbing a coat, or dash from the laptop where I was finishing a thought and would nearly have to jump into her moving car.

It was great that she wanted to be on time, but less stress would have resulted for her by instead singing out "Come on!" We'd be sitting in a waiting room at the end of the short six minute drive for five or ten minutes anyway, or sometimes two hours. You know what these doctors are like.

Don't get me started on her beautiful snoring.

One of her truly beautiful idiosyncrasies was triple kissing.

I'm not sure whether it was a form of superstition, or something mildly obsessive-compulsive but it certainly was a signature of hers, and an ever present thing throughout our entirety together. Kisses were always delivered in multiples of three. Always.

I noticed it right from our beginning, introduced to it on our first night of passion that ignited our story so brightly, with us lighting up the night, ending up exhausted canoodling while the birds chirped the daybreak in. It was triple kissing all night, and ever since.

I've honestly no idea what inspired or compelled those triple kisses in her head, but it was wonderful, even if head scratching at times. A unique quirk, and one that I'd not ever deeply thought about, or even asked her about, but rather just accepted and loved.

And I miss it every day, and think about it often now, still not analysing or wondering why, but just missing it.

Like so many beautiful things about Jude, the reasons behind them all will remain unexplained now she is gone. I guess when you love someone so much there's no need to question the motives behind any of the positive quirks is there?

People are often all too quick to criticise and try to understand our negative traits and habits, and explanations are routinely sought and uncovered for those.

At the extreme, that very much holds true when relationships for people sour to become complete shit, often from focusing too hard on behavioural opportunities for improvement.

In a relationship breakdown we'll actively analyse all the little negative idiosyncrasies, along with misdemeanours and hanging offences, and beg for answers, à la why the fuck, you fucker? The answers would well and truly then be dissected and workshopped with girlfriends or mates, and hung out to dry in public as a warning to everyone not to seek an involvement with that dirty dog, who never put his shit away and left dirty clothes all over the fucking floor. And why is my sleeve so fucking wet? May he hopefully remain un-fucked forever as penalty for breaking my heart.

All the questioning and analysis in those times is seeking closure in a relationship, I suppose, seeking to understand, plus throwing some negative idiosyncratic shit out the window, and out of our lives. The human mind likes a beginning, middle and a well explained end.

Still, just like when falling out of love, when we're madly in love we don't analyse the positive quirks. There is no closure in positive.

Another of Jude's signatures was aggressively seeking hugs. We'd just be hanging out somewhere quietly, or stood inches apart and face to face, or I'd be lifting her out of her wheelchair, and she'd look at me with a loving twinkle in her eye and loudly and aggressively deliver from point blank range an almost angry "CUDDLE!"

It was also used over longer distances. I recall needing to do a wee one time way back, interrupting a lazy bed time canoodle of hugging and kissing at length. Making a move to get up for that relieving intermission, I was pulled back down for two more lip pecks to complete the last triple set in hundreds, before being allowed to go anywhere (how did she not lose count, I thought?) Then while mid-stream in the wee, I jumped in fright and nearly sprayed half the bathroom after being bellowed at by her from the bedroom at the top of her voice. "CUDDLE!"

She also intentionally mispronounced words, usually involving exchanging an 'r' for a 'w', making her sound so adorable and cute, bringing thoughts of Betty Boo to mind. After a big assisted shower: "I'm fwesh as a daisy." Try it yourself. It's adorably hysterical. "I'm bwoken." "I'm in twubble." "It made me cwy again."

For decades, every journey down the hall heading to bed saw her stop for an idiosyncratic ritual. She would stand before each of our son's bedroom doors, delivering a quiet prayer or loving thinking lasting around twenty seconds or so, stood inches from each closed door gently blowing triple kisses with her hands raised to her face, fingers obscuring and lightly tapping at her lips, with whispered words.

It was a silent daily outpouring of motherly love, and was done even if one son or both were away at the time to an empty room with their presence imagined.

I still don't know what she was whispering and thinking, but it was a beautiful moment each day where I could only imagine the out-poured gush of love and hope and more that she was delivering.

Even the boys' girlfriends got her kisses and thoughts through the door too, much later on. I'd see her slightly shift her position, a physical tell of shifting her focus and attention to their girls. For them, she was probably gushing thoughts of hope that they were "the one", and to take good care of her little man when she was gone.

Whether walking, or later wheeling, that daily bedroom door ritual lasted almost until the day she died, and was only stopped by exhaustion, and confusion, and too many drugs to dull the pain. I would give a triple kiss when we wheeled past the boys' doors for her in those last few days, and I still blow a triple kiss every day for her now. I also toss in a few more when their girlfriends are in residence.

"Stop! Bwakes on, you cwazy driver! I need to give my kisses."
- Judy

She was idiosyncratically brilliant, I reckon.

In an effort to be a slightly better person, my floordrobing days are now over. I think about Jude's eye twitching over it while putting my clothes away these days, thinking that while she put up with it, I also think my set of idiosyncrasies really should better match her beautiful lot.

An improvement opportunity has been fully embraced, and I would have loved to have seen her face beam because of it. I should have done it years ago.

I'm also working on putting shit around the house away, and on shrinking Lake Saint Stevie, but I haven't quite got those skun.

These things take time, and careful attention to get perfectly right I think. My idiosyncrasy of taking my time and doing things properly is inexorably a thing that makes me who I am, spilling in to so many aspects of my life and how I live it, so that one is probably not going away. (And yes, like you, I do see the not inconsiderable irony with this trait juxtaposed against my messy ones.)

My perfectionist personality boiled Jude's piss every now and then, but she often reaped it's rewards, too. I see it as something I want to fix in many ways, but I reckon on balance she would have gushed about that quirk of mine, as I gush about almost all of hers. 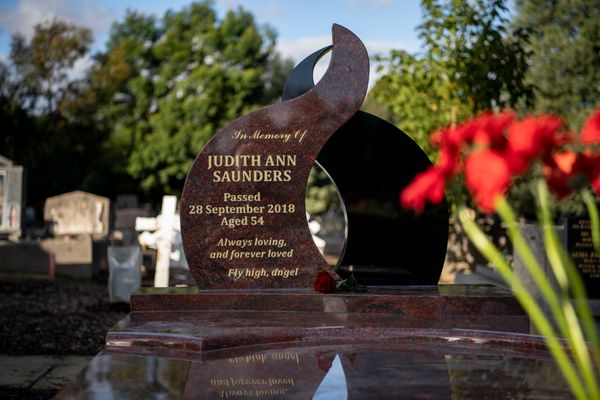 Judith Ann Saunders, passed 28 September 2018 at home and in a toasty warm bed in Glen Iris. This is my last blog post about my super spunk, my angel, my princess, my soulmate, who is gone but will never be forgotten.