In the middle of the week that was last week Judy started Wednesday off in a slinky MRI friendly outfit.

Looking fabulous, the appointment she had was to get some pictures of her brain.

The last MRI of her head she had was a follow-up about the tumor growing on or near one of her optic nerves, which has had a massive impact on vision in one of her eyes. She can't see straight ahead out of it, but does have some peripheral vision now.

That last scan we weren't expecting anything more than a simple check up because Judy's sight was the same or better since, so "scanxiety" levels were quite low for this visit. Adding to our confidence was that the scan before that one we didn't even get to see her brain doctor, Dr Sasha, instead we got handed off to one of his registrars (the medico name for a junior sidekick). We've decided being seen to by a registrar is a good sign.

But that last scan it ended up that the eye-affecting tumor was barely spoken about, though. Instead a new little spot a couple of millimetres wide and a few centimetres back from the existing revealed itself to Dr Sasha, who that time was definitely in the room.

Most chemotherapy drugs are prevented in having an impact on our brain by our wonderfully clever bodies. Chemotherapy is injected in the bloodstream, which is used to carry it to the farthest reaches of the body, but the blood delivery design for our brains incorporates a marvelous filter that allows food and oxygen in but prevents nasty stuff like many poisons damaging things up there.

Filtering out cancer fighting drugs doesn't help you much if you're trying to kill a brain tumor, though, especially if because of its type that tumor can only be fought with limited options like chemotherapy. For your head, radiotherapy is a good option, plus any drugs that can get to it.

So after brain scanning last week, we set off this week on our latest cancer adventure to find out what the pictures saw. Understandably, somewhat more anxiously than last time.

"And what's Bob the brain tumor been up to?"
- Sue

Many drugs do thankfully make it through that blood/brain barrier, though. And awesomely, Judy's current cancer hunter/killer cocktail, Afinitor the Mighty and Aromasin the Amazing can sneak right on in.

After a short wait in the hospital radiotherapy waiting room getting more anxious by the minute, Dr Sasha came out personally to greet us.

After we left this consultation about half an hour later Judy and I almost simultaneously blurted out: "Oh my God! My heart sank when it was him getting us and not one of his sidekicks."

Back in the waiting room, he walked us slowly across to his office. Sensing apprehension while exchanging pleasantries on the way, or maybe he saw the look on our imperfect poker faces, he rushed out that everything was all good.

Everything was stable, and nothing new to report. Some chit-chat and questioning later, we had to ask about the new little elephant in the room found last visit.

Scanning through the layers of the MRI on screen he found the aberration pointed out last time, but could find little evidence on the new scan. He pointed out that it may have been the brain equivalent of a varicose vein, but also remarked that Judy had been taking cancer medication.

Around three months prior, Dr Rob had stopped chemotherapy and switched her to the Afinitor/Aromasin cocktail. I'm tipping Afinitor the Mighty might have had a hand in this brilliant news.

So what's Bob up to? The Hanibal Lecter radiation therapy mask can stay in the cupboard for now, because Bob the brain tumor would appear to have been given his marching orders for now. 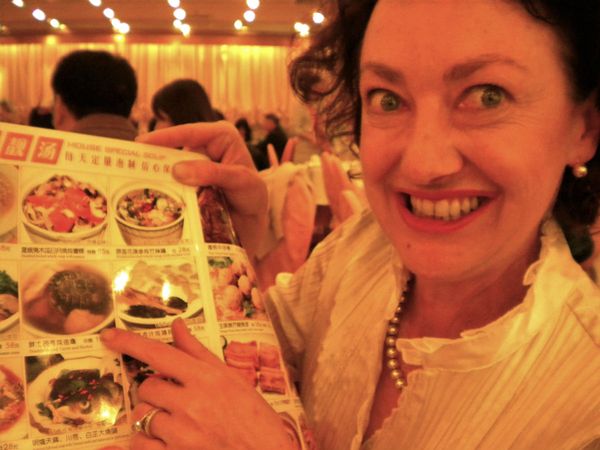 I find writing about Judy's cancer journey cathartic, meaning it's good for my head. It also turns out that it's good for Judy's beautiful head too. Always an optimistic Pollyanna, sometimes her wonderful disposition is a handicap, and that's where me sharing a story or two can help.