It was a big day today, seemingly filled with one simple act. I tried to change my Facebook status to 'widowed'.

I'd never even spotted that as an option before.

As I did so, there was a flash of vividly clear remembering, and a flood of grief. Another tissue box met its maker. Facebook will memorialise her account in due course and complete the change.

The morning that Judy died, a wave of crushing sadness hit me, the likes of which I have never before felt. It was like someone had ripped out my heart, then moved on to scramble my brain, then not content, kicked me in the guts a few times.

On realising she was gone, I remember rambling out loud: "Oh, no... No, no, no, no... Oh, no, no, no, no, no!" and then started making sounds that an animal might, through choking tears, clutching tightly her slight and still warm body in the bed beside me, and stroking gently her cooling face, and touching her beautiful lips, and seeing her beautiful blue, but vacant eyes.

I had never before seen death.

And I don't think I ever want to see death again.

A month has now passed, and I still can't believe she's gone.

The last words I spoke to her were: "I fucking love you, princess." I didn't get a reply, given princess was slumbering a beautiful slumber at the time, but that was OK. I knew that her reply would have been "I love you, Stevie", in a genuine loved-up call-and-answer response, without any lip service involved.

Those had been her last words to me, about twenty four hours earlier. "I love you, Stevie."

The preceding twenty four hours had seen some unusual shit go down around our house, so again her death coming shouldn't have been a surprise.

There was drug prep in the dining room, with a Pal Care pal drawing syringes of liquid morphine and midazolam, along with saline for flushing, and then installing a "butterfly" needle in Judy's tummy to allow administration by me.

There was teaching me how the syringes and valve at the end of the butterfly worked, and how to slowly administer, and then flush with saline any wonderful drugs that would be still be trapped in the butterfly needle line, to ensure full dose and effect.

And there was a run-through of the bed bath that Judy would get from me after the Pal Care pal departed, met with a two-thumbs up response, and a cheeky grin by Judy without comment, before she drifted off to sleep for the last time. Our Pal Care pal gushed that it would be just like a day spa treatment.

It was at about two in the morning that I gave Judy the first syringe of morphine. I couldn't get my head around what it was that I was doing, rather just did as I was instructed.

Her breathing had changed, and I straight away recalled Mr Pal Care telling me that morphine was not only good for strong pain, but also for settling breathing. Until then, Judy had been taking four or five steady breaths in, and then out, and then following it up with the absence of any breathing for a good six to eight breath equivalents. It's a thing called apnoea, and she'd been doing it for weeks before whilst sleeping.

I'd been using the handy non-breathing times in the last day to give her cute little dry mouth some sprays of an artificial saliva (bottled spit is a thing ... who knew), because she had been breathing through her mouth only. Her lips were also so dry, so I used Blistex lip balm each time to make sure Princess Plum Pudding lips was comfortable there.

After visiting the bedroom every twenty minutes for the same routine for hours and hours, at around two AM her breathing had definitely changed. It was faster, and constant, with no apnoea, and rasping at times caused by being too weak to cough and clear congestion. And there was the odd whimper of pain. That's when I shakily tried the first shot of morphine.

I lay beside her, listening. My heart breaking.

At about four thirty I called the Pal Care hotline for some advice. A kind lass suggested another shot of morphine, and one of midazolam too, and also offered that what I had described of Judy's condition, and her change of breathing did not sound at all good.

And still I was surprised, and shocked, and confused when she left us just a couple of hours later.

In one short month since, which honestly feels like many more months, people have been extraordinary in their outpouring of support, both in voice and in action.

I think that Seb, Al and I are doing extraordinarily well, and the support of many is helping immeasurably. There is a bunch of shit that we need to think through and work through ourselves, but others always being there grounds us, and helps us, and pulls us out of grief.

Distraction is good, but doesn't help us come to terms with grief, I've found. What has really helped me is confronting grief head on.

People saying the nicest shit, and people always being there, whatever the time of day or night has been just fucking brilliant.

I went for a long walk with one of Jude's mates, Andrea, a little while back. My God she's a beautiful woman. She's definitely my best mate now. We walked and walked, and talked and talked, and fondly recalled more and more, and laughed a lot. I was happy just being in great company. I cannot thank Andy enough for being a human rock to ground me, and emotionally drag me back out of a quagmire of grief, and out of numbness and emptiness.

Judy would definitely have been smiling a big whole-faced, red-lipped grin at us, pounding the pavement lost in chit chat.

One of the things I miss immensely, and think of often is not receiving her passionate signature 'triple kiss', every waking hour. So precisely and carefully planted. Three kisses exactly, even if locked in a repeated kissing embrace, always delivered lovingly in multiples of three.

I'll never forget anything about Judy, and will carry her memory until we are reunited. 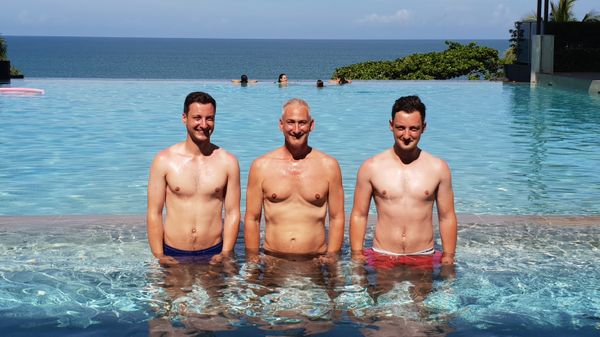 I have been feeling the loss of my soul mate as a physical tightness in my chest at times. It is a yearning feeling, I guess, of being on edge, of needing. It's somewhat akin to one who is addicted and being in withdrawal.