There's been much gripping and grabbing of Arraow's wheel over the years, so much of the top coat had worn off in places to reveal something quite nasty looking. And when giving it a thorough clean with Jay Leno's Garage all-purpose cleaner resulted in a greenish looking black dye transferring to the cleaning cloth it was, "Righto. Time to do something about that..."

So it was off to Supercheap Auto and grab some stuff to fix it up.

The steering wheel was taken off the car and filled, sanded and refinished. It was quite a simple thing to do, so I'm not sure why more people don't do this. Next to the seats, it's the most interaction one has with a car, so to have it all scuffed up and worn detracts from driving experience.

Left much longer, and the leather would have started to wear quite badly, so this was a timely restoration. I also replaced the M-Sport cover trim, which was scratched. $290 for that new, on top of $17 for spray coating, about $16 for wax and grease remover, filler and sandpaper from my shed, $6 for a tack cloth, and not that much time.

The wheel comes off the car. It has to.

Getting the wheel off is covered by many YouTube videos, so I won't bore you. It might be different for your car anyway. For my E46, a thin, long flathead screwdriver is required to remove the airbag (which is an aquired skill of pushing through a membrane-covered hole on a spring in the correct way, left side then right, and then a 16mm socket with an extension is all I needed to get it off, along with a T20 driver to remove the buttons and trim. The trick with the 16mm is to uncrew the wheel bolt with the steering lock engaged, mark stuff, then put the bolt back in a few turns, then wobble and yank the wheel towards you. Having the 16mm bolt still there, but loose means you won't smack the wheel into your head while yanking. Don't forget to disconnect the electrical connectors before doing so.

A warning: Once the airbag is removed, do not turn on your ignition. An airbag warning light will subsequently illuminate that requires a reset with a BMW scan tool, which you may not have, so keep the ignition off for the duration, or disconnect the battery.

Do mark the position that the wheel goes off/on before removal. You need to get that spot on later. A thin graphite pencil is perfect once you've removed the centre bolt for the first time so you can easily see where it goes back on to the same position. If it's been off before, then someone else will have most certainly marked it already, but if that's at all unclear, mark it again.

As an aside, it is surprising that there are very few YouTube videos about doing this kind of stuff, given how frequently people's steering wheels get fucked up over time. So I should have made one I guess, instead of this blog post... Sorry.

The filler that I used came with a kit called LeatherWeld by JB Weld. It's an okay kit that includes a bunch of acrylic colours for leather touch-up, as well as "Vinyl Adhesive", which doubles as a filler for light scratching, and a few other bits and bobs.

The way that the vinyl adhesive works is that you build it up in layers until the surface is mostly level, then give it a sand with fine grit. It's fiddly stuff, and it's tempting to slather it everywhere, but trust me, don't, or you'll end up in sanding hell. On some of the small dings and scratches I used a bamboo kebab skewer tip, dotting the adhesive where I wanted it, and then drying it, and repeating until level and sanded.

There are probably better fillers out there, but that's what I had in the shed.

It still boils my piss that the scratch at bottom left centre avoided my gaze, and that I didn't fill it. Ah, well.

I can't stress these things enough if you do this.

I ended up doing about ten light coats to get full coverage. You can see the rash at the top of the wheel gradually disappear as the coats go on in the photos below. When it was mostly done, I concentrated two more light coats on the rash at the top half of the wheel because there was almost no coating there to start with, so that bit ended up with about twelve thin layers.

Most of the progressive coats:

This kind of specialty coating does not need a clear coat on top, so keep on dusting it on until the nasty rashes like I had are all but gone. You'll end up with a nice matte finish that has a little bit of lustre to it (I wouldn't call it "flat" black, like is written on the tin though), and when that happens after a ten-minute-to-touch-dry visual check, you're done. Or maybe just one more light coat, like I couldn't help doing, but don't over-do it, or you'll fill too much of the leather texture. That's another good reason for really light coats, aside from avoiding drips; you can concentrate on the bits that still look like they need another coat.

Once finished to perfection (or close, because it's old), leave it for forty eight hours to cure.

Seriously. Two days. Or around one if the weather is dry and stinking hot.

Don't poke it. Don't be tempted to touch it much, and definitely don't scratch it. Just let it sit for a couple of days. You can carefully peel off the masking after an hour if you must, like I did. Hopefully you didn't stick any of the masking to the spray coating. If you did, then you used layers that were way too thick.

And then whack it back on the car, getting it perfect because you marked where it came from, and marvel at how clever you've been for less than AUD fifty bucks plus beer money. (I'm tipping USD30'd do it. Plus beer.)

Installation is quite obviously the reverse of removal. Less the cursing trying to get the airbag off, of course. E46 spec is 80 Nm (59 ft-lbs) for the centre bolt, in the hope that you own a torque wrench. Do look up your car's specs. And go buy a torque wrench, because it's important doing up bolts on cars so you don't under or over-tighten them. You will use it again.

Apparently you can use your favourite interior detailing products on it once it cures, and I'd leave it a week, but it's a steering wheel, yeah? I don't want mine all slippery, or slimy or sticky, so none of that gunk will be used here. Just Jay Leno's Garage all-purpose cleaner, which is gold (no sponsorship), but next time thankfully it won't remove any black dye.

That's what I did, but as always, your mileage may vary, so be careful. 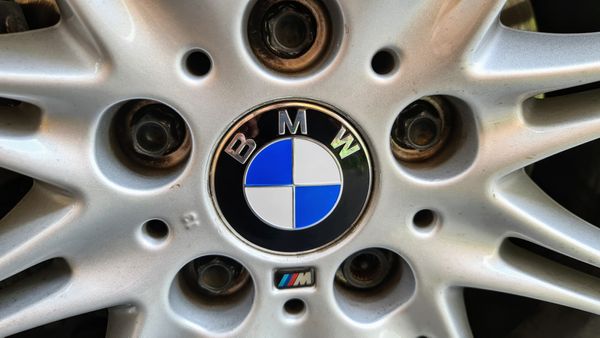 BMW love putting their logo everywhere on cars they build. They're proud of it. One of the first things I did to Arraow was to replace all of the exterior roundels.