With more eyes than a spider, tricks such as lidar, cliff detection, social interaction, monster truck tyres and weaponry, his own web site with camera, and a heck of a lot more brain power than your average huntsman, I give you Kevin. The Tourettes speaking, self-navigating robot.

The kay-rona-virus crisis of 2020 spawned Kevin as something to do whilst there was nothing to do in isolation. I also wasn't working at the time, so needed anything to do.

Kevin, as an outlet gave me an insight into what retirement in many years holds for me: making up supid shit to build, and then building it to be the best it can be. In isolation I've built a potato cannon from PVC pipe that fires a bloody long way. I've built a crossbow from K-Mart kids stuff that fires bolts at twenty metres per second. I've built an Internet-connected fan with an integral web site for people to randomly "blow me". Kevin is just the latest in a long list of stupid shit, but he's awesome. And over-engineered.

He's far from perfect right now, and the over-engineering is probably to blame.

Despite being mostly fully functional, retirement in future might be needed to finish him off. Battery power for starters. Oh, so many power problems, so technology needs to catch up... A lightweight, high-power, high-capacity source would be a good start. Small scale nuclear fusion? Hydrogen fuel cell? Some bright fucker will work it out eventually... Huntsman spiders run on the smell of an oily fly, but not so Kevin, with his three brains on top of moving himself about takes a fair amount of juice. What's his run time on average between charges? About ten minutes, which is hardly enough time for social engagement on Faceballs, and then he's off for a two hour "fast" charge.

I guess I didn't fully think through that aspect of design. 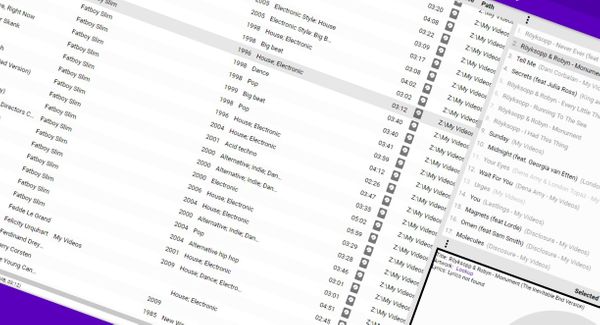 I've tried quite a few bits of music tagging software that utilise song lookup services, and many of these are great. But they generally suck for music videos.