What an amazing bit of kit the brain is. We humans are so resilient, and adaptable, and smart.

As amazing as it is, with this body part there's obviously a fine line between being brilliant and being a bit busted.

Of Judy's last visit to hospital a couple of weeks back, dressed in full costume as Princess Droop Loop, she doesn't remember at all the sleepy bits and delirium she experienced, but most of the hallucinations she does.

Those imagined events were retained as clear memories, so as she snapped out of it (which was more like a steady march than a snap), the days following saw quite a bit of memory reconciliation.

"So I didn't have Deidre as a visitor?", asks Jude with a confused look. "Nope, that was all your own work", I replied. "No waaay...", she replied with an equally confused look.

And how about dinner with Baz and Barb (my folks), where Barb was strangely dismissive, and ignoring things Judy said? "No, darling. Anyway, they're cruising in Europe."

And dinner with Dr Rob? "Nope", I dashed.

"We have to thank Dr Rob so much for dinner... [Steve looking blank]... We didn't have dinner with Dr Rob, did we? Bugger."
- Judy

They were so vivid, and so clearly remembered.

Some events were as bizarre as a dream, yet unlike dream memories that get disposed of almost instantly, these memories were like the real living deal. Other made up events that could have been everyday were remembered as she would on any given day, so were harder to distinguish as odd.

Sister in-law superb Gillian inquired "Was Dr Rob a good cook?", and Judy recalled "No, not really. The food was a bit disappointing. We know he loves to bake and the Day Oncology angels love his tasty friands, so it must have been an off night. It was a good night, though."

After a couple of days with the creative imagining behind her, Dr Rob firmed up the plan for short term disease management going forward. He tipped in a drug to the current set called olanzapine, and he also set about doing something about the cancerous nodules seen last MRI that had grown in her head and elsewhere, despite chemo.

Olanzapine (I shall nickname it Ollie) is used to treat mental and mood conditions (things like schizophrenia, bipolar disorder, depression, and that sort of thing), helping to restore a balance of the usual natural substances that mingle around in your brain. It also helps to decrease hallucinations and agitation, and helps you to think more clearly. In Judy's case its application was to proactively head off any Princess Droopy Loopy events that might come in future.

Some time ago, Dr Rob had explained to us right before the new head plumbing was installed (Ommaya reservoir at front, and shunt at rear) that he and Team Neuro had discussed at length the possibility that chemotherapy might be injected into her beautiful brain only to have a lot of it dribble out the shunt out back, down a tube and harmlessly into her tummy. That wouldn't do Judy any harm, but equally it wouldn't do any harm to a lot of the cancer cells swimming around in the far reaches of her head and spine, because the drug could end up greatly diluted in places there.

That the MRI looked worse than the one before, despite Metho T-Rex chemo into her head, reinforced that dilution was almost certainly happening.

Oncologists tend towards using the least invasive, lowest impact and most effective treatment options they can, amped-up by the likely havoc on life that a cancer may be about to wreak. It's akin to appropriate use of force by police in a given situation: if a crook gets rowdy, then a copper should get appropriately rowdy in return.

"I say we take off, and nuke the entire site from orbit. It's the only way to be sure."
- Sigourney Weaver as Ripley, in the movie Aliens

As appropriate use of force, Dr Rob's plan was to employ radiotherapy against the visible nodules growing in her head, and the other floating tiny tumours (as I call them) in her CSF, with a course of radiation.

The radiotherapy that she's received in the recent past for her optic nerve, called "stereotactic", involved super accurately pointed narrow beams of radiation shot from various low side-impact angles to go cancer killing in a single spot while minimising collateral damage. The radiotherapy for her head is a little bit different, in that her brain as a whole is shot at, although still with non-brain bits masked off.

It compliments the last shots of radiation she had to her lower spine to go cancer nodule killing there, where the cancer was messing with her leg function and more. Plus complimenting another shot to her pelvis that was to stop some pain caused by the MBC bitch growing in some bone. (MBC = metastatic breast cancer.)

Princess Fuzz Nut was just starting to grow her hair back after a month off Paki Taxi chemotherapy, but now will lose to the nuking the cute little fuzz she's only just regrown. Ah, well. It's just hair. Wear the loss of it proudly, I say.

It's scary stuff having your beautiful brain shot at, even if the treatment itself is fairly easy, painless, non-invasive, and on the whole is an uneventful affair (excepting the great chit chat with the wonderful clinicians at her hospital).

It's scary, yes, but the alternative of doing nothing is far more scary.

When Judy was presented with this treatment option, she treated it as a no-brainer (her own pun). She refuses to lose. She refuses to lay down. She won't leave her boys without a fight. She will do whatever it takes.

At decision stage, Judy was still an inpatient of the hospital, so decision made, the decision then became to go home, or not to go home.

Most times, patients receiving this therapy are inpatients. When the question of escape was posed to super cool radiation oncologist Dr Karen, she answered with a warm smile "I guess that's down to how good your negotiation skills are..."

One school of thought ran: you're already in a hospital, and a hospital is the best place to be should this nuke-from-orbit go pear shaped. The other schooled: home is the absolute best place to be to rest and relax, and also to feel more like a human than a prodded patient.

So to go home, or not to go home? Shakespeare's Hamlet may have continued: That is the question: Whether 'tis nobler in the mind to suffer, the observations and hospital prods of outrageous fortune, or to take arms against a sea of troubles, and by opposing end them? And so on. Vacillating, and umming and ahhing, as he did.

Unlike Hamlet, who was grappling with the slightly more weighty musings of getting around to avenging his daddy's death at the hand of Claudius, Judy and I were of a single mind with this easy decision: As good as hospitals are, hospitals are horse shit to be in, so if she only needed to be there on a "maybe", then we weren't going to be paralysed by indecision like Shakespeare's bloke. We were out of there, with no negotiating.

What's the worst that could happen? We'll be back.

I was able to bust Judy out of hospital late on Friday, with us and everybody not having seen Princess Droop the Loop return for days. This was just in time for dinner at the regular local Italian, and also just in time to avoid another dreary weekend in hospital, where nothing happens except for being prodded and woken every four hours, day and midsummer night (in winter presently, for us), which in Judy's case almost certainly wouldn't have turned up anything untoward anyway.

Almost a week on from that decision, and almost all head shots done like a boss, it was absolutely the right call. If princess were going to pale it would have been after the first or second "fraction", as the doses of radiation are called, but she handled it with ease.

"Yeah, I'm feeling tired. But I was feeling tired already. Bit of a head, but I had one before. It's no biggie."
- Judy

Dr Rob is going on a month long holiday, so princess better behave while he's away.

We caught up with him before he goes to touch base, tweak medications, top up prescriptions, and also to chat about what's next. There's been a bunch going on that he's honestly not sure of the cause, but with the underlying root cause of it all certainly being cancer, the plan ahead sounds like a solid one: keep smacking it into submission.

Dr Rob looked a bit pale himself, so we're so happy that he's getting away and having a good break. 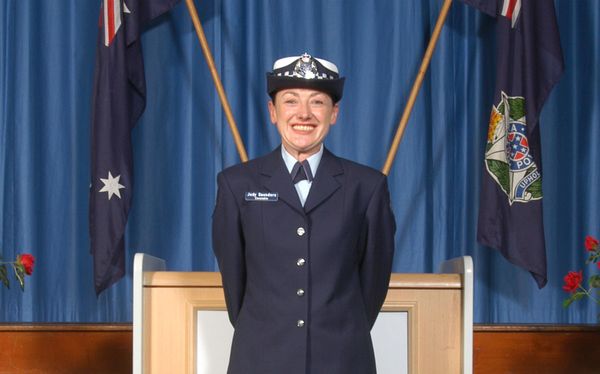 Police officers give, and give, and give to the community, with very little returned but a modest pay packet. In our Jude's case she's given that little bit more in the form of a beautiful big red smile.