Dr Damien has been looking after Judy over the Easter weekend. He's one of Dr Rob's registrars, and as you would expect he is lovely.

Dr Damien looked as excited as Judy when he finally found her in her newly acquired private room for a catch up. Yay! Single room! This is the first time ever in this hospital that she's had one, so you can imagine how excited she was looking.

Her room is a relative palace, fit for our Princess Red Lips.

"This is so lovely. It's better than the Park Hyatt."
- Judy

A wonderful position, with large windows overlooking the leafy green suburb below, loads of storage space, loads of power points, an en suite bathroom, a table to sit at, and chairs enough for plenty enough family and guests.

The only blight on the aspect, position and amenity was the wailing woman a few doors down the hall repeatedly, mournfully and pathetically calling out "Please... help me..." over and over and over to the point that nurses completely ignored her. God help that woman if she actually does need real help at some point. Wolf! Wolf!

(As an aside, crying wolf! recalled to me where I had heard a similar mournful cry for help: the first person shooter computer game Castle Wolfenstein, where dying soldiers piteously cry out for help as you pass them, on your way to shoot more Nazis.)

But any amount of mournful, repeated and distant wailing is nitpickery next to having been sharing in a room of four with a Russian woman who had resting bitch face and a penchant for creating the most deeply impressive skid marks in the toilet, plus a lovely, but snoring Aussie bloke who was completely over being flat on his back for four weeks, and always had the TV volume too loud while he slept, plus various other passing inmates passing wind, an obstacle course to get to the shower or have a simple wee, plus about a thousand cloying Russian visitors.

Finally. Peace and quiet. With a view. And no Russians.

Today was the first test of Judy's new brain plumbing, with methotrexate chemotherapy being injected into her shiny new Ommaya reservoir, so the private room was good timing.

Despite having his registrar Damien standing in for him over Easter, Dr Rob himself came in to personally give it, and see how Judy was doing. Given the holiday he was casually dressed in Polo shirt and jeans, looking for all the world like he'd just taken a break from his day of rest to see Judy. In truth, he'd been hanging around the hospital all day.

Dr Google gave me the skinny on methotrexate. It is a chemotherapy agent and immune system suppressant, used to treat cancer, autoimmune diseases like psoriasis, rheumatoid arthritis, and Crohn's disease, and also for treating ectopic pregnancy and for medical abortions. Righto.

Any side effects in Judy's case are expected to be negligible, given the tiny doses that will be frequently given of this quite "gentle" chemotherapy drug. Plus the targeted way that it is being administered should mean almost no collateral damage elsewhere in her body.

This afternoon, giving her the drug barely raised a "meh". The site where the Ommaya reservoir was placed had been numbed by Dr Gavin during surgery by cutting some nerves when he installed it, meaning she didn't even feel the repeated pricks of syringe needles. The pricks were one to take about 6ml of CSF for testing glucose, cancer and for infection, another to inject 5ml of methotrexate, another for flushing. 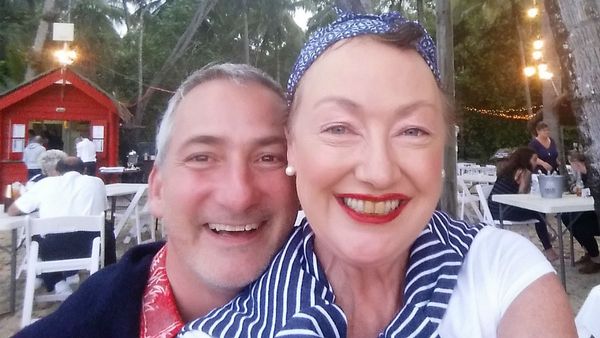 It's two years today since normal life went to custard and Judy's breast cancer returned with a vengeance, and in that time there is much to be pissed off about, but more to be thankful for.